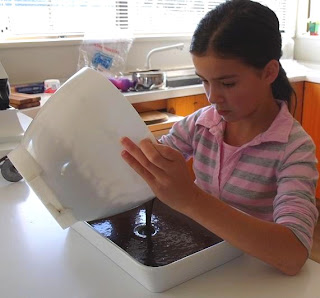 Rachel was so excited about doing her cake this year. So she started this morning by making the cake. It's a lovely recipe. Check it out - Deep Dark Chocolate Cake. It's the recipe we will be using for the girls birthday cakes this year and Brendon says it's the nicest chocolate cake he has tasted. Even better than a shop bought box cake. 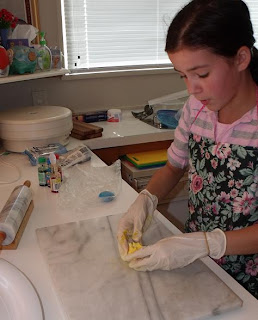 This afternoon she got started on the icing. The first job is colouring the gum paste. And it's not as easy as it sounds. It starts off really hard - so you have to work it quite a bit. She strengthened her fingers and hands a lot today with all the work. But she managed it all on her own and learnt a lot. Well done Rachel. 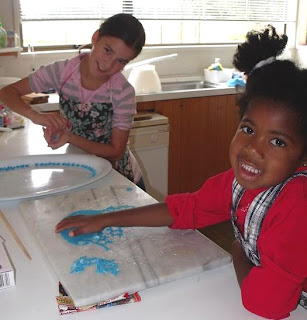 She was happy to accept a little bit of help from Ruth and I when it came to cutting the flowers out. I would place the cutter, Ruth would cut and then Rachel did the most important part - shaping. Her pinkie is the perfect size to get a nice round effect on each flower. The gum paste is perfect for this as you can roll it out nice and thin and it dries really quickly. We were a little disappointed with the food colouring I have. The colours just did not turn out as dark as she had planned. So I think we will have to look into a gel colour for future projects when we want dark colours. 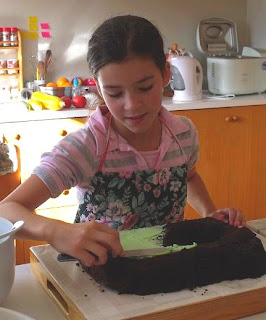 With thinking through all that still needed to be done we decided to get started on the cake itself today too. I did help with the cutting so that we had a nicer natural shape (rather than a sharp edged rectangle). Rachel was thrilled to do some of the buttermilk icing herself. But as the cake was only baked this morning she decided she would leave the cut and built parts for me to do.
She coloured the green ready to roll icing and I did the big green piece that would cover it all. I don't have a nice light rolling pin (that you are supposed to pick it up with) so her hands would just not have been big enough. But that's where my help ended. 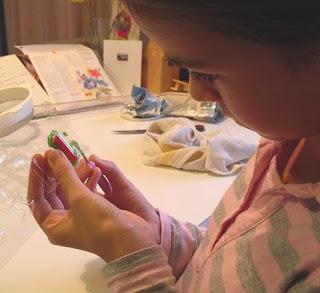 She used the red (well - dark pink - but it was meant to be red) for the first part of her name and then used left over ready to roll for the green (to match the green grass of the cake). This is very delicate work and takes a lot of patience. I suggested she start with the l to get a feel for how it works before moving onto the harder letters. She did such a good job. She had to stay up a little bit later to get the last letters done. So she has had her first experience of working on a birthday cake when you are normally sleeping. I've done a lot of that over the last few years. :-) She did not want me to do them for her though. She was just thrilled to be doing it all herself.
Posted by Buckland at 7:59 PM