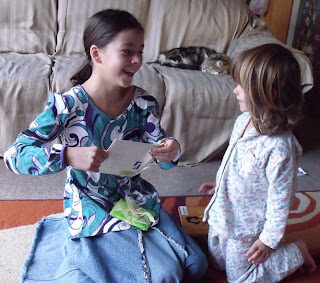 Rachel was patiently waiting for the girls to wake up so that she could open her present from Grandpa and Nana. Eventually I said she should rather not wait for Ruth as she was really sleeping in today. I don't know what Hannah said but I love the way it got Rachel laughing. Hannah also sang Happy Birthday to Rachel and gave her 10 big crocodile claps. 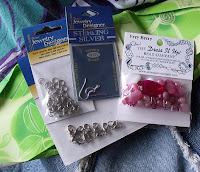 Her present was some jewelery making things. Some special pink beads and then a set of earrings and a few necklace clasps. She was so pleased and I am sure she is going to have some lovely creative times with them. 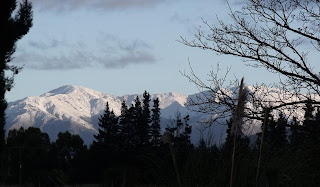 Lovely snow on the mountain this morning.
Rachel had an appointment in town this afternoon so we made a day of it. Julia watched the younger two and they had such a lovely time. Again I forgot to take a photo.
We got a little bit of shopping done first. I managed to buy two pairs of maternity leggings. The second pair are going to become my pajama pants as there were no maternity pajamas available. We also managed to get a few more beads to add to Rachel's collection and then it was time for lunch. 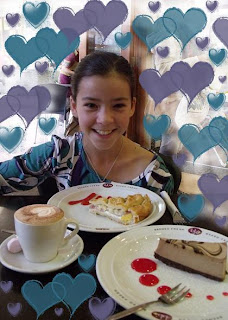 Rachel has been so looking forward to this. We had checked all the coffee shops on our way in and so Rachel made her choice of what she wanted. She had a Bacon and Egg pie for lunch and we shared a Chocolate cheesecake for pudding (we bought a second piece of a different cheesecake that she chose for afternoon tea). The highlight for Rachel though was having a hot chocolate - with marshmallows. She said it was so beautiful on top she did not want to even start. She was thrilled with this experience. It was so nice to give her something that in some ways is so simple but was such a special birthday treat for her.
Then we headed over to the material shop to get the other part of her present (the lunch being the first part - at least in her mind). She chose a pattern and then we chose material. It was on special at $3/m so I suggested she just get two colours. They ended up being the same two colours she had on today - the purple and the turquoise. She is SO excited about making herself some winter dresses. I think this will be a birthday she remembers for a long time. 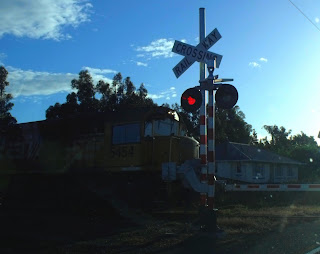 We had a little bit of time before her appointment so I popped in to Briscoes to have a look at their slow cookers. Lynn made such a lovely dinner in hers and I have been a bit frustrated with my pressure cooker lately. So when they had a special with almost 50% off, I was thrilled. I managed to get one just like Lynns - a lovely big 6l one. So watch this space for my first slow cooker meal.
Another treat for us was on the way home. We ended up driving along with a train from Amberley to Waipara. It was the first time we have ever seen a train pass when we are at the crossing. So again - something quite simple but enjoyed as a first for us.
Posted by Buckland at 8:00 PM