Hard for the children 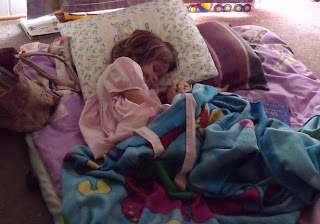 I was pleased that Hannah was happy to have her afternoon nap on this bed the girls had made on their floor this morning. She was about to go for a nap on Tuesday when the earthquake hit. We had stayed together and were pleased there was only one major after shock that we felt quite soon after the big one. Eventually every one's hearts were back to their normal pace but when I told Hannah it was time for a nap (for her and me) she said she wanted to sleep in my bed with me. This is quite out of character for Hannah who generally does not accept an offer to come into our bed. I was more than happy having her close by. And I was glad she was with me because just before 3pm there was another big aftershock which woke her. I was awake and so was watching to see if she would wake. She immediately said "earthquake" with a worry in her voice and I said "yes, but you can feel it's stopping - everything is ok" to which she replied "ugly earthquake". So this has given me a very small (incredibly small) picture of what the effect of the earthquake can have on the children. I really do feel for the children in town and fully understand when their parents just want to get out of the city so they can try and have a good nights sleep. And we only had the two aftershocks felt out here. The people in town keep getting rattled by them. 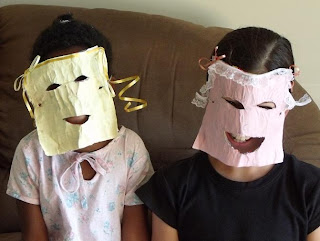 The girls were pleased to be allowed to do some art work in the library upstairs this afternoon while Hannah and I napped. On Tuesday I had told them I wanted them downstairs through our nap time (just in case we had to get out of the house quickly - I wanted them relatively close to me). So this was their creation from this afternoon.

And I must also tell you about Rachel's "snap dressing" today. She spotted what I had on and decided she was able to match me today. :-) These skirts are so old though. You can see Rachel's is quite a bit lighter (as she has worn it so much over the years). You can also see how many years she has been wearing it because when I made them hers also went down to her ankles. I do need to try and find some similar material so she can make a couple more. This was actually just cheap material I bought to try the pattern on. It ended up being our favourite out of them all.
Posted by Buckland at 8:00 PM