I have been extremely tired this week but was thankful to have enough energy to take the girls to Music and Movement this morning. Although I did a LOT of yawning while I was there - at least Sarah knew why. The Music went really well with lots of visitors and most of the families have people from Christchurch staying with them. I had offered our home too, earlier this week, but I think the Lord knew that it would have been too much for me. It's been hard enough to make sure my own family gets fed - so to have extra mouths to feed would have put too much pressure on. So I was thankful for the extra hours of sleep I have gotten this week. Brendon has had a cold since Monday and all the girls have had it, so I think my body has just been taking extra strain as it fights off the germs. 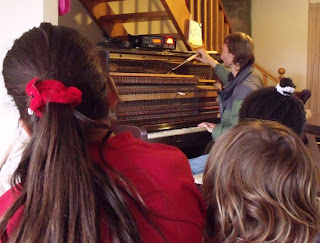 This afternoon the piano tuner came. He spent over 3 hours on the piano as he worked at getting it up to concert pitch. I don't think it has been in concert pitch for many many many years. And to know that the piano is a good 150 years old too. I was very pleased he was able to get the pitch right without even breaking one string.
He stays in Christchurch and was driving around town on his motorbike when the quake hit. He said he thought he had flat tires but then saw that everyone else was struggling in the same way that he was and they all came to a stop. Thankfully he has a place to stay in Rangiora - so did not have to head back into town when he left us.

We enjoyed listening to him play a little once he was finished. Oh how I would love to be able to do that. Definitely NO time to do any practicing for me at this time in my life though. Maybe one day.....
Posted by Buckland at 8:00 PM