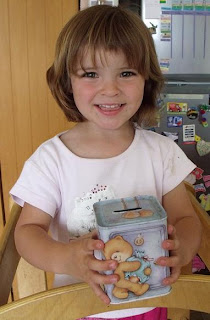 Hannah has started earning her own 10c now. She has time in her room every afternoon (although she does not actually sleep often) but I still put a nappy on her just in case she does fall asleep. Well, after a while of having dry or almost dry disposable nappies I decided we could go back to cloth nappies. Firstly they would handle the small amount and she is also able to take them off. So if she needs to go to the toilet she can go (and I just put the nappy back on when she is done). If she does fall asleep and does a wee it's no big deal (the bed stays dry). She has been doing really well though and when her nappy is dry she gets herself 10c for her money box. While she was still working this all out I would ask her "is your nappy dry?" and she would say "No. No money. No lollies". So the motivation of earning money to buy lollies has done the trick again and she is now regularly adding to her tin. 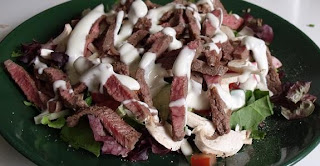 I have quite a bit of schnitzel from the beef that we bought a while back and came up with a lovely summer meal. Schnitzel salad with a yogurt honey sauce. It's the first time I have every cooked rare meat but the pieces are so very thin that you really do need to do them quickly. 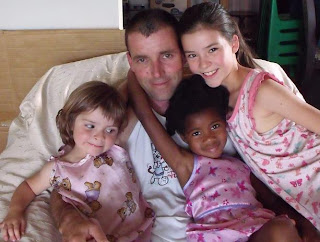 And although they are really pink, there is no blood (that would be too much for me). Actually the pieces in this pack were a bit thicker - so it was more rare than I intended but it tasted good and was enjoyed by all.
And merry? Well, my merry little family of course. And just to make sure you know that Brendon gets loads of cuddles too. :-)
Posted by Buckland at 10:01 PM