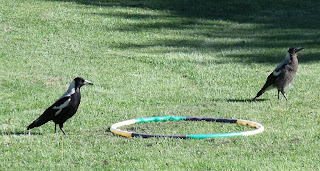 The girls enjoyed watching this parent Magpie show it's young one (on the right) how to look for worms. You can see the difference between the two as the juvenile has more grey colouring. We heard the juvenile cheeping for food and that was what made us look outside.. Amazing that such a big bird can still act like such a baby. :-)
Something I forgot to mention yesterday was that Brendon also had his first piano lesson. After thinking about possibly starting on the violin along with the girls he decided he would actually rather learn to play the piano. So he had his first time of practice this afternoon (I had a meeting to go to last night - so the afternoon ended up too busy).

Everyone is quite pleased with the new Andre Rieu DVD I bought which arrived yesterday. The girls watched some of it yesterday after I had left for town. Brendon watched it last night while I was out. They were so excited - telling me all about it - with ice skating, water fountains and ballet.
I was surprised with the amount of traffic on the roads when I traveled home last night. Not only cars, I also had two hedgehogs almost run in front of me.
Posted by Buckland at 10:00 PM