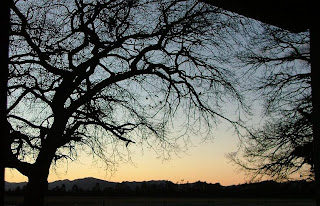 The weather was very strange today. At 7am you could look out the back door and see a beautiful clear sky..... 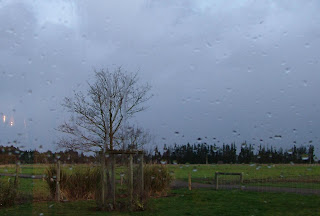 But it was actually raining at the house and this is the view from the kitchen window. 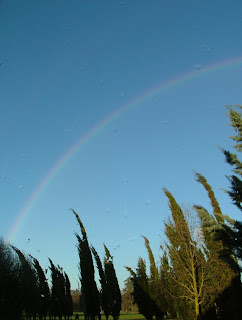 At 7:40 it was still raining and Ruth spotted this rainbow out the dinning room window.
Also notice the shape of the trees. The wind has been incredible today. 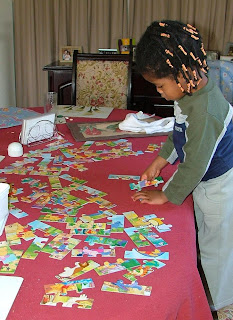 Ruth found another box with puzzles in. These are 3 piece Winnie the Pooh word puzzles (with 3 letter words on each). It's so nice having this space allocated to her on the dinning room table (where Hannah can't get to them). 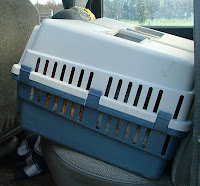 Dad called just after lunch to say he was quickly coming home with the chooks. 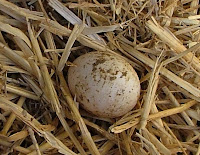 We even had our first egg. It was in one of the transport boxes - that's why it's dirty. 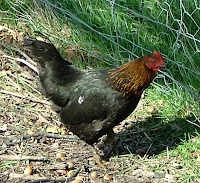 And what beautiful birds they are. 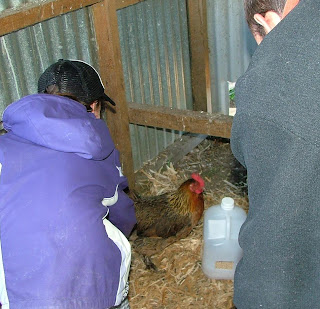 Rachel trying to have a little wipe as they leave the boxes. 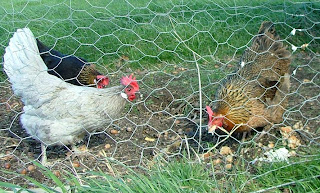 3 different colours. Already enjoying the scraps Rachel has taken for them. 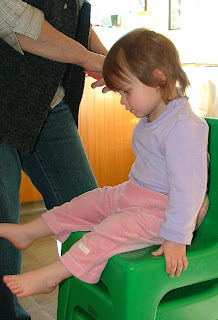 I had lent our previous neighbours our camping cot and today she brought it back. She also brought her scissors along to give me a haircut. Hannah woke up when she arrived and was so interested - she ended up having a hair cut too. 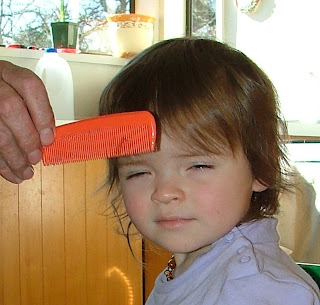 Her hair has been in her eyes for a while now and although I love her having long hair, it was also becoming a problem. I had not decided if I actually wanted her hair to be cut - but the decision was almost made for me. Hannah was really keen. 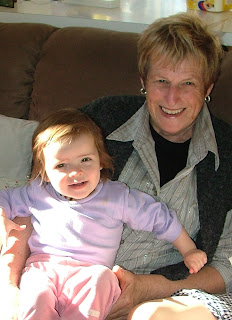 When Ruth woke up they went out to see the chooks. Well, they came back crying because they were all out. They had found a gap in the fence and had thought the area next door would be lovely to scratch around in. 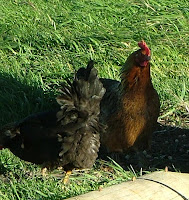 So nice and green out here....
Thankfully it was not too hard to get them all back in. Brendon then fixed up the fence. 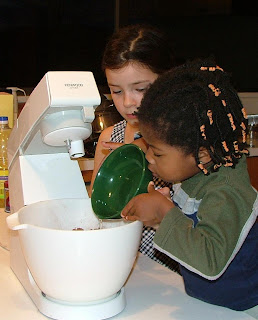 The girls made a cake to say thank you for the chooks. The chooks were given to us at no cost by someone on the farm where Brendon works. He breeds birds and there are not "pure bred" and so he does not really want to keep them for breeding. We think they are lovely though and are so thankful.

And before bed Ruth finished up the puzzles. At first I had her looking for ones with blue but eventually I just sorted them out and gave her sets of 12 pieces so she could just have to sort and make 4 puzzles at a time.

And with the oven on we may as well cook some more chocolate biscuits for Dad (and there is still another tray in the freezer) and another orange cake for all of us.... :D
Posted by Buckland at 2:28 PM

wow, those chooks are gorgeous, enjoy them!!