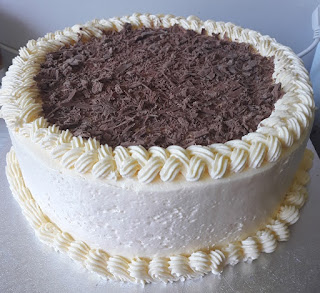 Thursday 25th: It was the last day for someone on the farm that Rachel works with, so she decided to do another trial of the 2nd biggest cake for the wedding cake she is doing in Feb. It looks beautiful. I love the piping work on the top. Rachel had thought the last trial was a bit dry. Today she realized that we are always comparing to our lovely moist chocolate cakes - so it's not a fair comparison. This one is more light and airy - and its what the bride has requested. So at least Rachel feel more confident about it now.
BELOW: On our way home from town on Thursday. I had to take this photo of Anastasia. She is so funny and often holds her car seat (often with both hands). Her latest trick is getting her leg up above the seat belt. So I thought this was a good photo record of her antics. :-) 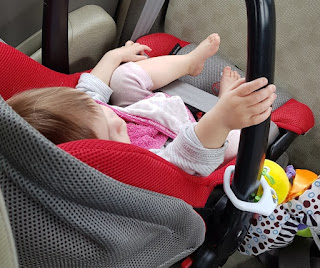 Friday 26th: Athletics during the day (separate post) and then we were split for the evening. Hannah, Hezekiah and Anastasia headed to the church movie night with Brendon and I, while Rachel stayed home with Asher, and Ruth went to Youth Group. It was a Marvel movie this month and Ruth doesn't like Marvel movies. Rachel's reason for not wanting to watch was that there are other movies she needs to watch first to watch this next one in order. I love how unique we all are.
BELOW: Saturday 27th: Ruth, Hannah and Hezekiah headed up to help clean the pool today. Hannah wasn't keen on getting her feet in the dirty water when they started, so she headed home early. Well done team. 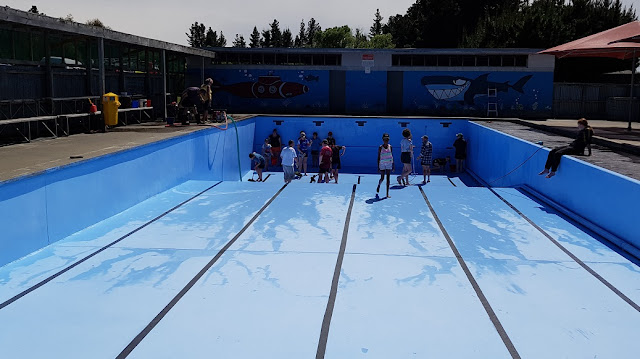 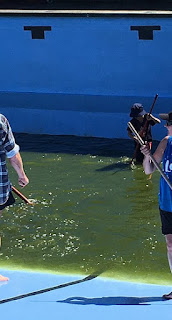 I got these photos later from Ruth. Hezekiah was obviously NOT worried about the dirty water. It looks like that was what made it fun. He was pleased about having walked along the deep end of the pool. :-) 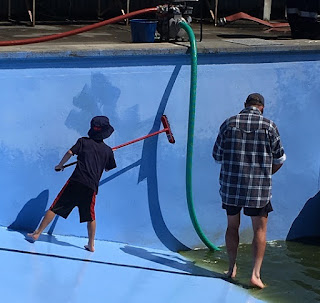 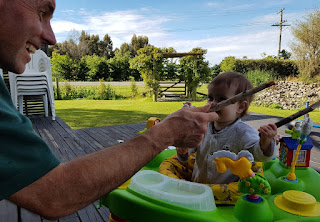 The only time Anastasia is actually in the Excer saucer anymore is when Dad's doing the BBQ. It keeps her in one spot and she enjoys being outside. They had some fun hitting sticks together today (she sees that often with Asher and her music sticks). 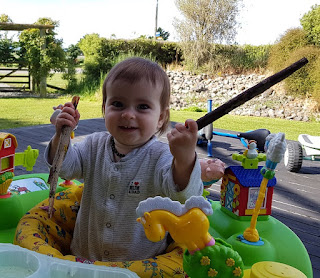 Anastasia decided she wanted them both though. Such a cutie.

Monday 29th: Hezekiah has had stomach ache for over a week now (with no other symptoms), so we headed down to the doctor this afternoon. In the past he has gotten cramps from eating wheat, but over the last months it's been much better and so he has had a few extra wheat items every now and again (like biscuits at church or a piece of bread at a sausage sizzle).
I did some research though and in order to know if he is coeliac, he would need to be eating a good amount of wheat every day for 4 weeks. The doctor agreed that this was a good step in the process of finding out what is going on. 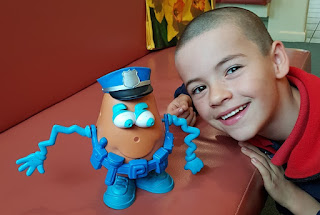 She did acknowledge that it could just be a wheat intolerance - giving all the same symptoms as coeliac disease. But if he is indeed coeliac, it would be good to know so that we can handle it correctly.
So we have a blood form to do blood tests in 4 weeks time, once he has had enough wheat in his system for long enough. My hope is that the pain does not become too much for him. It's going to be a very hard month.
I love the blue potato man he made while we waited for the appointment. 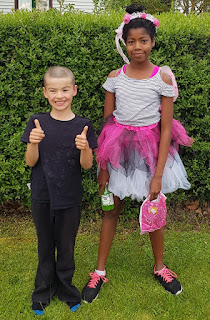 Wednesday 31st: There were two light parties on today run by different churches. A lovely "non-scary" alternative to a Halloween party. So much fun for the children.
The first one was in Waikari and so I took Ruth, Hannah and Hezekiah down at 4:30. I didn't get a photo of Hannah unfortunately as she was very quickly off with friends. She was dressed as a very bright pink and black coloured fairy (her Jazz concert outfit). Hezekiah had a batman mask, but decided not to wear it. They had a great time with all the friends and activities that were on.
Rachel had offered to take them down to the Amberley light party too. Only Hannah and Hezekiah wanted to go to that one, so they headed off to that (as it only ended at 8:30). And I collected Ruth from Waikari when that one finished at 6:30. 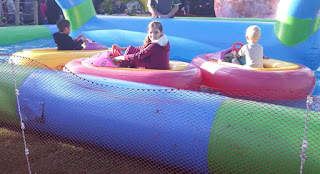 Rachel forgot to get a photo of Hannah's outfit, but did get one of them in the floating bumper cars. :-) 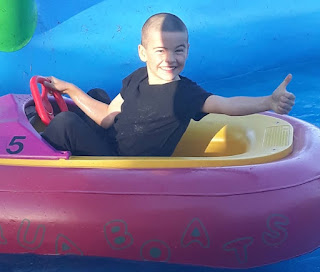 So nice having a bit sister with a full licence to be able to take you to special events. :-) 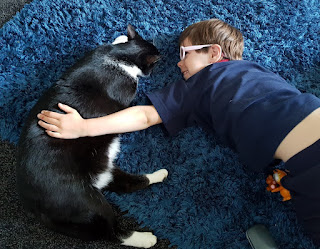 Thursday 1st November: Asher having a little chat to Anakin. So sweet.

I couldn't get a children's photo this afternoon because by the time Anastasia was up from her nap, Ruth had headed out to a meeting at the Hurunui Council. She is applying to be a representative from her school with the Hurunui Youth Council. Again handy for us that Rachel could take her down. 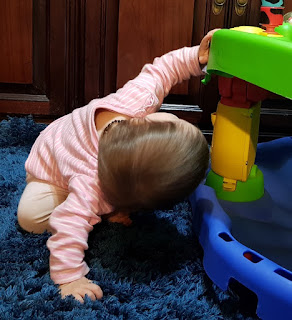 Brendon and I had such a laugh this evening as Anastasia decided to examine how the toys on the Excer-saucer worked. She spend ages looking underneath the rim. 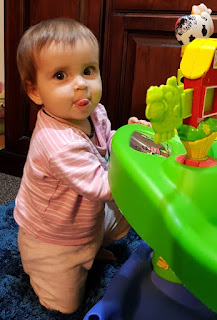 And she had a go at seeing if she could undo them too. Such concentration with that little tongue out. 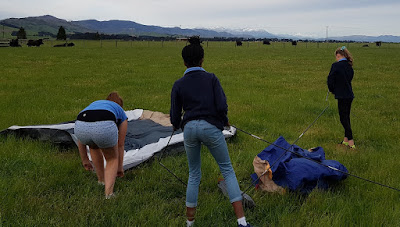 Friday 2nd: I made sure I got the children photo this afternoon before Ruth headed off on a Guide Camp. The first 24 hours of the camp is a camp run by her for 3 other girls. She had done all the planning, paperwork and budgeting ect. 2 other girls had their "mini camps" at the same time and then they joined up on Saturday afternoon. 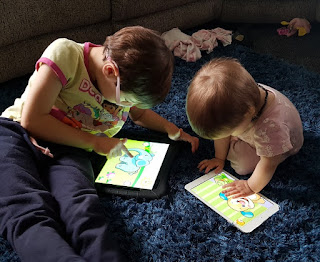 If you click on the photo to see it larger, you will notice the snow capped mountains in the background. Typical NZ spring weather. Thankfully it stayed dry for them.
I heard on Sunday that they just didn't manage to get this tent up as it was too windy. So they put it up inside the wool shed. It was a good call, as the one tent that did get up, ended up almost blowing over in the night and they had to move into the woolshed in the middle of the night.
When I got back from dropping Ruth off I had to smile at these two playing next to each other. They had the same app open. And they both kept looking at what the other one was doing. :-) 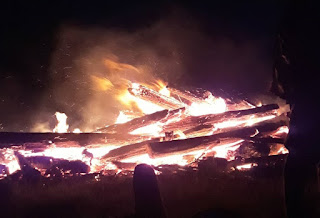 Anastasia has been enjoying taking a few steps this week. Falling down is a part of the process. Normally it's straight onto her bottom, but at least she was on the soft carpet when she chose to face plant. Tough girl though, so she can just get up and go again.
As Rachel is at a formal tomorrow night when the Waiau fireworks are on, she suggested taking Hannah and Hezekiah to the Waipara ones tonight. There is always a big bonfire at this one - so that was fun. 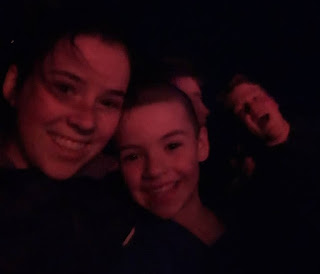 Rachel forgot to take some photos before it got dark, but I think this is still a special one. 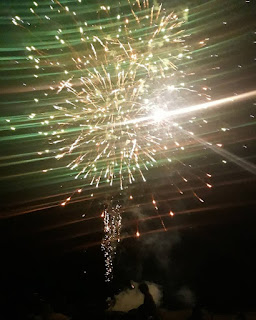 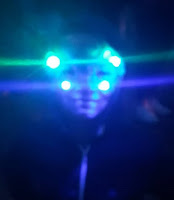 The display is not as big as the Waiau one, but it was still a great evening out.
Hannah got a clip with fibre optic strands.


And Hezekiah got some flashing glasses.

Thanks for taking them Rachel. Special memories made.
Posted by Buckland at 10:00 PM