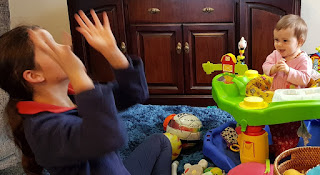 Tuesday 4th: Hannah had Anastasia laughing so much this afternoon, by just throwing a ball and making fun noises. I had Asher sitting next to me laughing along too. 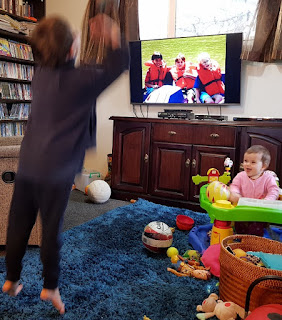 Once Hannah had stopped, Asher got the ball and started trying to copy the game. She would jump up and throw the ball up, laughing all the time. Anastasia laughed along too. So much fun, and thankfully Asher didn't hit the lights with any of her "too hard" throws.

We had Asher's IEP at 1:30 today. It was a good time of reflecting on how much she has learnt and grown over the last two terms and also to make some plans on some of the next steps and goals for her.

Enjoy this video of the fun. 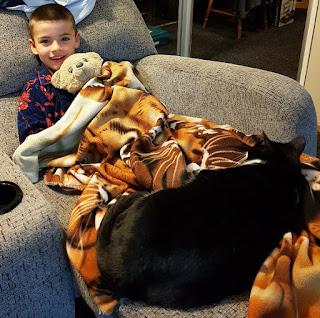 Hezekiah brought Ed the Ted home today and they got to sit and enjoy a bit of TV together this evening. 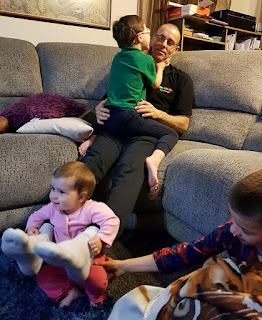 Wednesday 5th: Hezekiah was exhausted when he got home today, his legs were especially tired. He was also loosing his voice and by the evening had a temperature. Rachel came back from camp with almost no voice, so it seems he is struggling with the same thing. He often gets a fever. It seems his body just heats up quickly and does a good job of fighting any illness off.
RIGHT: Anastasia was using Dad as a jolly jumper this evening, bouncing away supported by his legs. Having so much fun.
Thursday 6th: Hezekiah was already feeling much better this morning. I had thought he may spend the day at home, but he said he was fine and wanted to go to school. I think his voice will take a while to fully return though. 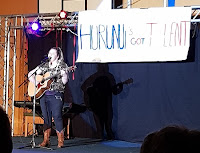 He decided to stay home with Dad this evening while I went to the Hurunui's Got Talent event with Rachel and Hannah. Ruth was already at the school earlier as she was helping. 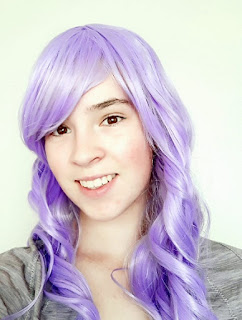 Rachel is going to a St John Regional Competition Camp at the end of this month and they are having a colour themed party on camp. Rachel is in the light purple group, so she decided to buy a wig for it. She put this photo as her fb profile picture with the comment "trying out a new look" and had a number of people fooled into thinking she had coloured her hair.
She even wore the wig to the show this evening. :-) 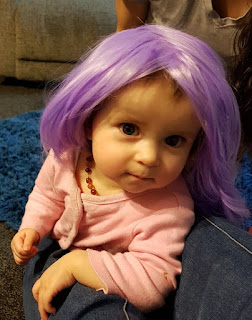 When we got home she was wondering how to let people know that it was just a wig (and a joke) and so we tried to get a similar photo of me. We didn't get the angle right and the wig was already needing a brush. She posted this photo and said "I have a twin". :-) The evening lighting wasn't as good has her day time photo either. 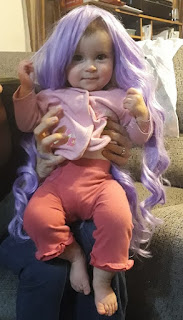 She even got it on Dad (but no photo taken) and then on Anastasia.
Who wasn't at all worried about this thing on her head. :-) 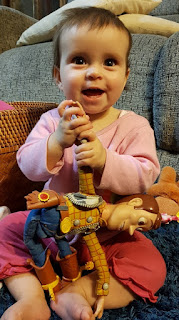 Friday 7th: Hezekiah stayed home from school today. He was just looking so tired this morning. I suggested he stay home but he was very upset. He was already dressed and ready to head out. I asked him why he wanted to go to school and it was so that he could share his news with the class about the money he had raised with the Reading Eggs challenge. He is on "news" on Fridays, so had been waiting the whole week to tell his class. So we suggested he just ask the teacher if he could tell the class at the start of the day, and then come home. He was happy with this plan and so pleased to be able to share his news.

Asher had a seizure at 11 and was very tired afterwards. Thankfully she has had a good 10 day break since her last one, so we are thankful for that.
RIGHT: Anastasia just loves playing with Hezekiah's "Woody". She loves chewing his hands. So I thought it would be a nice photo for her baby book. 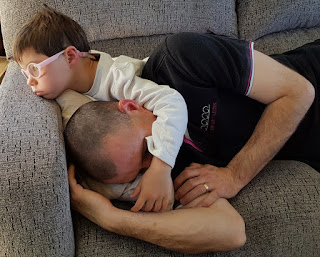 Saturday 8th: A nice relaxing day today. Asher was very tired and when Dad lay down for a nap she decided it would be the perfect spot to lie and watch her DVD. So sweet. 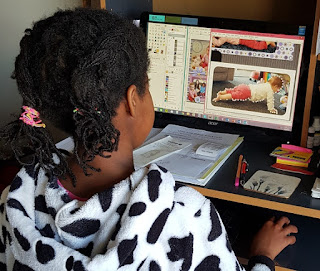 I've been enjoying getting baby book pages done more regularly over the last couple of months. Today Ruth was my helper in "cutting out" some of the photos I was using. For the first time I'm actually doing pages a month after, so I will remember more things than what can be captured on the photos. So far Hezekiah's book has been done up to 9 months (I will do his each month so that by the time Anastasia is 1, his should be done). And I have done 7 and 8 month photos for Asher too but decided I wanted to get Anastasia's 8 month pages done while I remembered things I wanted to add. So it's very unlike me, doing bits and pieces all over the place, but at least they are getting done.

Sunday 9th: Last week Rachel, Ruth and Asher were not at church while this week, they were the only children who did attend. I had Hannah and Hezekiah home with Anastasia and I as they were both not feeling well. Hopefully a day's rest will help them both get better. Hannah really does want to get over this quickly (and wants her voice back) as they have a Music Festival Choir practice on Monday in town.
Hezekiah plays so nicely with Anastasia. 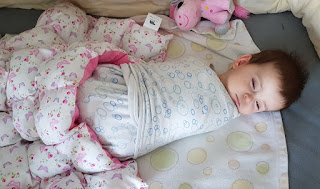 I have a lot of baby photos of the other children sleeping in all the different funny positions they get themselves into. So I thought I had better get a photo of how Anastasia sleeps. My first baby to need to be swaddled.
Asher wasn't feeling great at church and ended up spending most of the service sleeping on Dad's lap. On the way home she had a seizure and then slept till after 3pm. Perhaps she is coming down with the same thing the others have. We just hope she doesn't have a bad cluster of seizures. 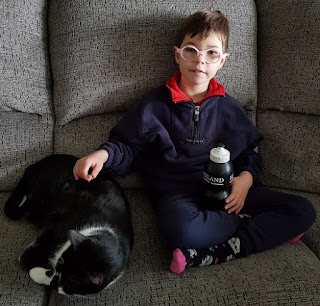 Monday 10th: We had thought Asher would just have to spend the day sleeping at home today, but she was up at 7 and anxious to get going. So we changed the plan and got her to school. She didn't last very long through and the fever she had yesterday afternoon came back, on and off through the day. So she was home just before lunch and had a relaxed afternoon. She looked fine and didn't even sleep. She doesn't look like she is getting sick, so she is just keeping us guessing. Thankfully no more seizures today. 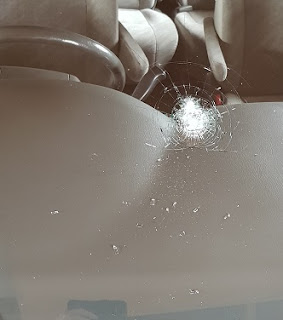 Brendon was able to take our van with a load of children to the choir practice in town this morning. Unfortunately on the way home, a huge rock flew up and hit the windscreen. It gave them all a terrible fright. It was such a big crack that there was glass on the dashboard.

Anastasia loves playing peek-a-boo under a cloth.
Posted by Buckland at 10:00 PM