A 12 year old and dental success 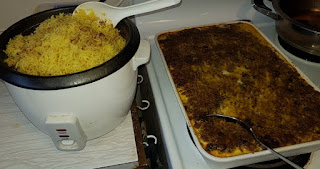 Mon 2nd: Ruth and Hannah were both very pleased when they heard that Rachel had made bobotie for dinner. It's one traditional South African dish that we do make every now and again. It's a mince dish (with raisons in) served on yellow rice. Hezekiah wasn't thrilled, but at least there was still left over bbq meat for him. 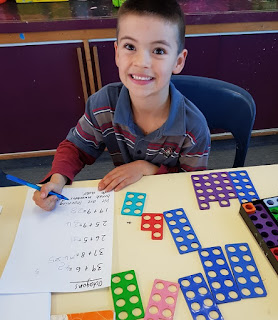 Tue 3rd: The postponed Hangi happened today and the weather was perfect for it. Apparently Asher really enjoyed it. The amazing thing though was that as they were watching them take things out of the ground, and all that could be seen was steam, Asher said "hot food". So although she didn't really understand what was happening, she understood enough of what had been spoken about that she knew that steam was from food. And as it's meat and vegetables, it's her kind of food. All the children enjoyed the food - even Hezekiah who was not really very positive about it when he left this morning. He does have a very simple palate. I'm please he at least tried it and he enjoyed the meat.
Goal setting for Hezekiah was after school today. He got to show me how he uses the numicon shapes to do more complicated sums. Like 19+9. 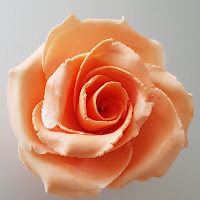 Rachel baked cakes for Ruth's birthday cake today. As she was in a cake mode she decided to practiced making fondant roses. She has been asked to do her friend's wedding cake in Feb and they want peach coloured roses. She bought a peach dust (that makes this wonderfully shiny - not visible on the photo but very effective). She also had to research how to create a peach colour. She did a great job. I think she is feeling a bit better about it now that she knows how to create the colour and a lovely looking rose. 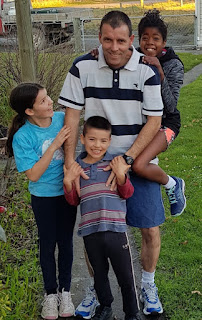 Hannah joined them for a run this afternoon. They had all agreed that it would be a slower one today. That was the only reason Hezekiah even agreed to go with. And it was a really good thing too. Brendon hung back with Hezekiah to encourage him to keep going and that gave him the opportunity to watch Ruth more carefully. Her knees have still been hurting a bit, even with the corrective shoes, and so Brendon wanted to see more carefully what she was doing. Once they were all back he pointed out to Ruth that she is running on her toes (and this is why her knees are taking too much strain). He showed her how to focus on heel to toe, and so she gave it a try. She was amazed. At first I worried that it would feel too different for her, but she was so pleased. She said "I can go so fast". Brendon pointed out that her stride was already better too. It really is exciting to see what she can do now that she knows how to run. :-) What a blessing to have a Dad who can help you so clearly with your technique. I'm sure it's going to make a huge difference. We are all excited about seeing her speed on the next run. 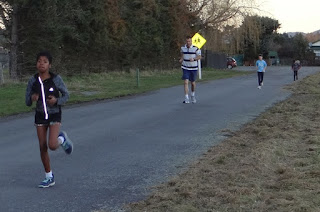 Well done to Hannah and Hezekiah for joining them.


Anastasia is really getting the hang of the Jolly Jumper. 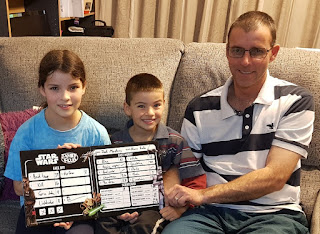 Asher was looking at me and enjoying the sounds I was making as Anastasia jumped. She enjoyed it so much that she decided she wanted in on the action too. She walked up to Anastasia and turned around, almost wanting to get in with her. She was quite persistent, not understanding why she couldn't have a turn. So Dad came to the rescue and was Asher's Jolly Jumper for a while. What a workout he got. She had so much fun though.
This evening we played Star Wars Family Feud for the first time. Ruth was a bit upset as she wanted to be the host but it was more complicated than she realized. 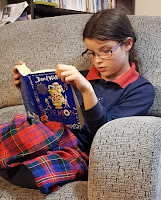 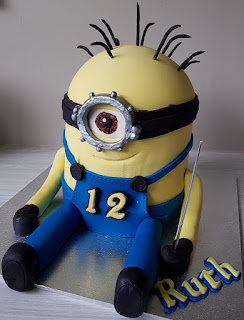 Wed 4th: Hannah enjoying a book she got out of the library today. It is such a blessing to see her enjoying reading. It was a hard start for her for a number of years, so this is very special to me. 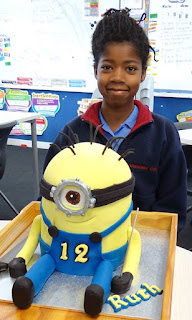 Today was dedicated to Rachel decorating Ruth's cake. Other than taking a tiny bit of time off for lunch (forced by me) and then taking an hour off to help at the school with cheese roll making for Ruth's School Camp fundraiser, she worked solidly on it the whole day. 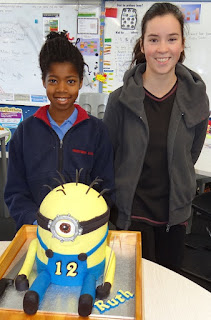 The only help I gave her was yesterday with cutting the top cake into the round head (she did an amazing job of her crumb coat though to get it nice and smooth). And then today I just helped make the hair. It was already 7:30pm and so Rachel was exhausted. I'm sure she would normally have been able to figure it out, but I was glad I could just quickly get them done for her.
They dried out overnight and then Ruth helped me place them on Thursday morning. Rachel did such an amazing job. It is just brilliant. Thanks for choosing such a fun cake Ruth, and well done Rachel for pulling it off so very successfully. 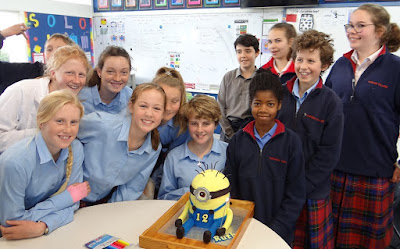 Thursday 5th: Enjoying the cake with her class. Rachel came straight from work so that she could join us for the cutting at lunch time. As Ruth expected, there were a few comments about her only turning 12. Most of the children in her class are turning 13 this yea. She was a bit worried about there being enough cake as she has almost 30 children in her class. It was more than big enough though and we managed to take some left over home for the family to all have a piece (or two). 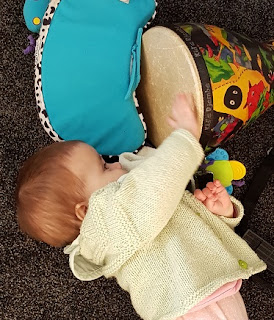 Anastasia rolled herself over to this drum and was having so much fun with it. She would mostly scratch it, but was laughing with enjoyment.

Brendon and I had appointments this afternoon, so we brought pizza home. Anastasia enjoying a bit of crust again. We do need to get the highchair in for her soon so that she can start trying out some other finger foods.
This evening we played Family Feud again with Rachel (she was out on Tuesday). It was much more successful and good fun. Ruth was just disappointed that she was again on the loosing team. 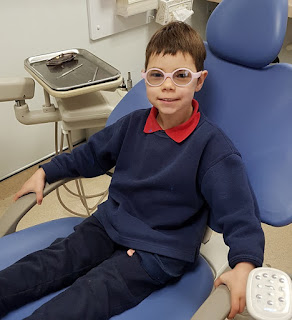 Fri 6th: Going to the Dental nurse is a real challenge for Asher. Last year she screamed as soon as she was in the truck. So Rachiel (her Learning Assistant) and I have been discussing how to try and help Asher. We decided to split the appointments of the 4 children between two days. Today we had Ruth and 9:30 and then Hannah at 10. When I came to book the appointments, Asher had seen me and so been happy to follow me up into the truck. That was already a great first step. So our plan was to get her to follow Ruth and I this morning. If she was happy to just see Ruth going, that was our first step. We would then have Hannah's appointment to give her a 2nd opportunity to go in, getting her that little bit more comfortable with it. Well, she shocked us all and not only happily followed Ruth and I in, but when she saw the chair, she just went in and hopped on. 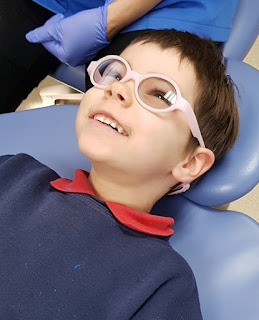 We were all giving her praise, taking a photo and showing it to her also helped. Then she allowed the chair to go back, with us talking excitedly about how much fun it was and how clever she was. She wasn't that keen to open her mouth, but I asked if I could brush her teeth. The dental nurse was onto it and quickly grabbed a toothbrush for her. So while I brushed her teeth, the dental nurse had a look around. She has even given me one of their mirrors so that we can use that regularly. It will help us check that there are no clear issues, and also help her get used to it for next year.
Rachiel is sure it has helped that the truck as been parked just outside her classroom for weeks now. So she is already more comfortable with it (compared to last year, just arriving and going in). She has also gotten used to the noises it makes and that children go in and out often. So we were just thrilled.
Ruth unfortunately needed a filling on one of her back adult molars. They are tricky to keep clean and it didn't have a seal. Amazingly she decided to try it without the anaesthetic and she managed. Well done Ruth. 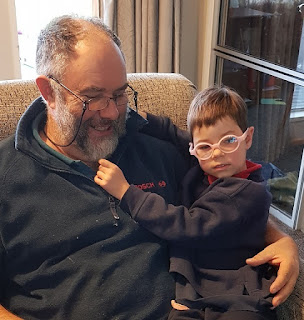 The dental nurse had told her that if at any point it was too painful, she could just raise her hand and she would stop. She didn't need to stop though, and Ruth said it was only a bit sore when it was right down, getting the softer bits out. I was so pleased she managed so very well.
Hannah was super quick and so we managed to get Hezekiah in as well (who was also quick). So we don't even need the 2nd day of appointments. What a relief. 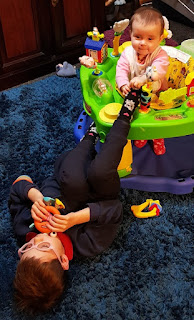 It was lovely having a visit from Dave and Jenny this afternoon. We did a beef / pork swap which we were very thankful for.
Brendon and I both managed to get to squash this evening. While Brendon was out I had to smile at Asher and Anastasia. Asher was allowing her to grab her socks. Sometimes they even ended up in Anastasia's mouth. They were both giggling and having fun. So special.
They had a full school assembly for the end of term today. There are so many photos though, that I will put all of those in a separate post.
Posted by Buckland at 10:00 PM