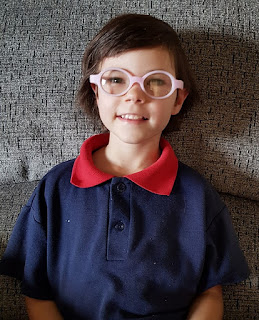 Monday 26th: Thankfully Asher's energy levels have improved every day. She headed off to school this morning and as soon as we got into the class room she said good bye to me. I was a little nervous about her last visit ending so quickly with her feeling sick. So this was a relief for me. She remembers being there happy.
She is also eating so amazingly well at school. The new medication can cause children to loose their appetite, so this is a real blessing to see. As Rachel said - with Asher's history of reactions to medication it's not a surprise if it's actually having the opposite affect and giving her an appetite. Let's hope the appetite stays. She actually lost weight after stopping the Ketogenic diet (it's normally the other way around).
NOTE: It only lasted for about 3 days and she has gone back to not really eating much. 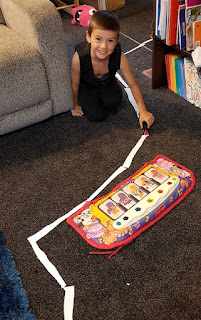 Tuesday 27th: Hezekiah made a train track this evening. I love how creative he is.
Wednesday 28th: Asher had a day off school today. She was a bit confused about not going with all the others getting ready. It was a short day though as school closed at 12:30 and then they had an Open Day the whole afternoon.
I headed back to the school with Hannah, Hezekiah and Anastasia at 2:30 (Ruth had stayed at school to help with things). I got to spend a bit of time chatting to Hezekiah's teacher and then spent time in Asher's class. It was good to meet some of the other parents and be able to be available to answer any questions about Asher. 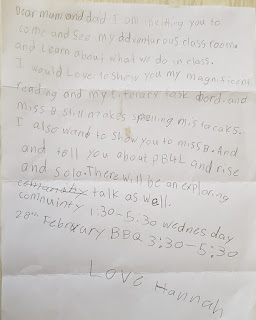 Then Ruth, Anastasia and I just hung out, chatting a bit to Ruth's teacher and some of the other mothers there. They had a sausage sizzle going on through the afternoon and Hezekiah and Hannah had a great time playing.
Brendon then joined us for the official time in Ruth's class and then Hananh's. It was a lovely afternoon and so good to catch up with so many people. 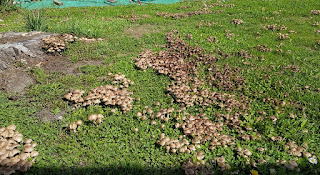 Thursday 1st March: Ruth thought it was very appropriate that the garden was full of mushrooms this morning. She had read that Autumn was the time of year  for mushrooms, and so it was perfect being the first day of Autumn. 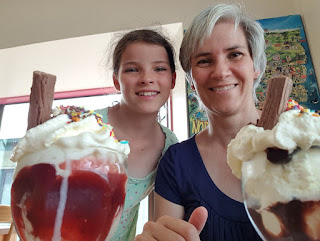 We were too busy to collect eggs yesterday, so Hannah and I headed off this afternoon to pick them up and have a treat. 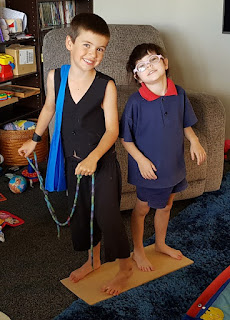 Hezekiah brought this piece of wood home from school today. He often does have creations to bring home. And it's always lovely listening to all the amazing things they can do. I'm not sure that I even want to try remember what this can do as I may get it wrong. It did remind me of Diego's magic backpack that can change into anything. :-)
This evening he was "surfing" on it and Asher went over to join him. 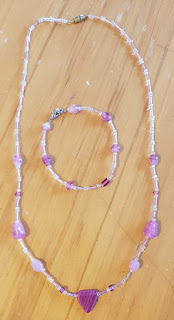 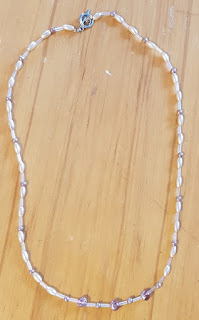 Some more of Ruth's creations. 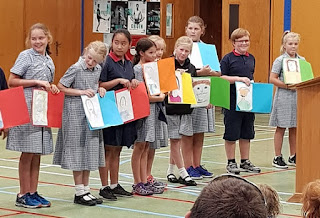 Friday 2nd: Full school assembly today and Asher's first assembly attended as a student. She did amazingly well. I stood up to take this photo of Hannah and she spotted me. She just said "Hi Mum" and didn't try to come to me - so that was really good. She only said it again a couple of times (I had thought we would constantly here it through the rest of the assembly). 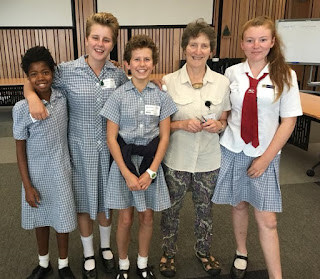 Ruth and a couple of other children that do Kiwi Watch with her were invited to attend a schools enviro group hui at ECan this afternoon.
They left school at around lunch time and were only back after 6pm. What a great opportunity for them.

We moved the side board over today so that it was in front of the TV. We are trying to stop Asher from touching the TV. The one good thing that came from the move is that even though it was only a 2 meter move, it made the cupboards something "new" to look through and Hezekiah got playing with these domino accessories. Who cares that they were designed for dominos. 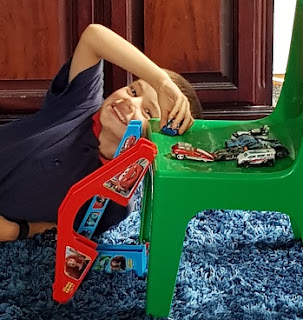 They made awesome car ramps. It was so much fun watching him play.
That is also not a watch on his arm but a Velcro strip that he found that became some fancy gadget. :-)
In general Hezekiah is so very creative with his games. I love that he can often just play on his own with his wonderful imagination.
Posted by Buckland at 10:00 PM