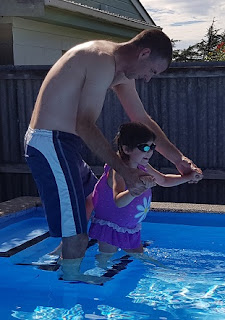 Saturday 3rd: We finally got to test Asher with her goggles at the pool during the middle of the day. We headed down before lunch today. The water was very cold though. Even Asher hesitated about going in. 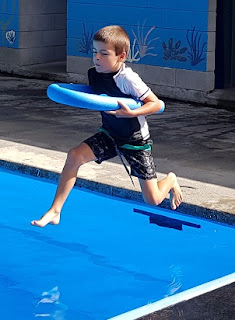 Hezekiah didn't mind the cold at all. Even during the Wai swim lessons, when it was really cold, he was the one that stayed in the pool the longest. It sounds like one day he ended up the only one left in his group having his lesson. The others were all out and trying to warm up.
He is doing so well with his confidence in the water. He was excited about showing me how he can jump into the deep end.

And how he now swims in the deep end (with a pool noodle). We had an issue the following week though, as he went into the deep end without a floating device, and got tired and felt like he was going to drown. Thankfully one of the boys in his class who is a really good swimmer helped him to the side. 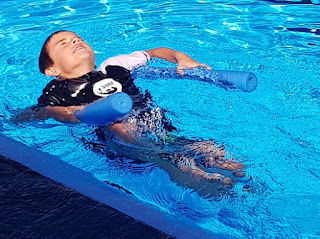 So he understand that for a while still he will need to have something with him to keep him up. At least it didn't put him off swimming.
He also showed me how he goes backwards. He has a nice strong kick and keeps showing me how he keeps his feet in the water. :-) 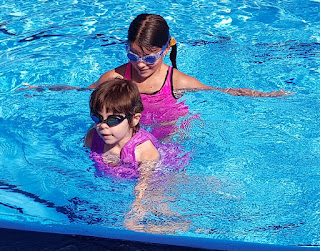 Asher then decided to try the big pool and Hannah supervised her for a bit. She didn't last long though as it was so cold. She was in and out. 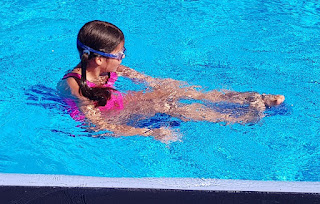 Hannah then showed me what she had to do with the pool noodle during her lesson. Good balancing practice. 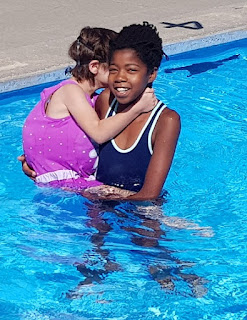 Asher decided she wanted to try the pool again (it is just too tempting for her as she loves swimming SO much). So she went in with Ruth. Ruth played with her for a bit which helped her get a bit more used to the water.

And in no time she was off. She decided she wanted to swim the length of the pool. It was great that she stayed close to the side. Once Ruth was out of her depth at least we were right there and able to grab her if she had a seizure. 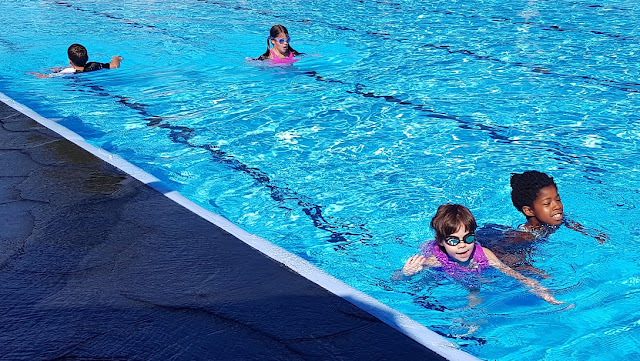 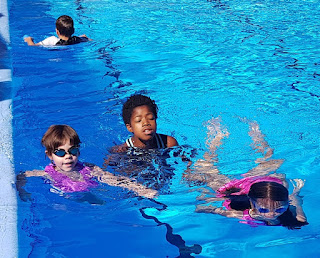 She had such a good time and we were so pleased that it was a seizure free swim. So it does seem as if the later afternoon light is more of a problem for her. Unfortunately we have discovered this a bit too late in the season. I don't think they will worry about trying to get her to the pool for swimming at school for the rest of the term as it has started getting cold. With the fact that one of the Teacher aides will have to go in with her - I think we will just leave it for next season when it's nice and warm again (and when us adults are happy to venture in).

Nice to get a video of Anastasia laughing. It's always tricky as she still tends to just stop everything when the phone comes out to take a photo or video.

Playing peek-a-boo with Asher. Asher does so love this, so it was nice to get her playing it with Anastasia too. 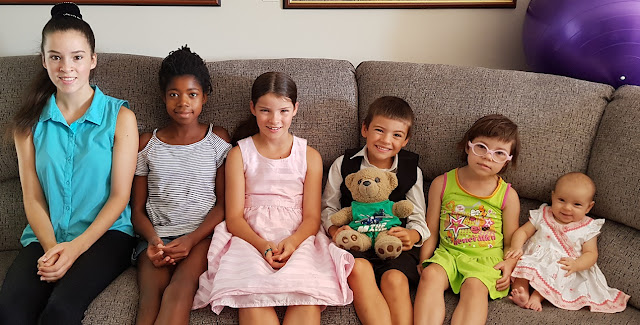 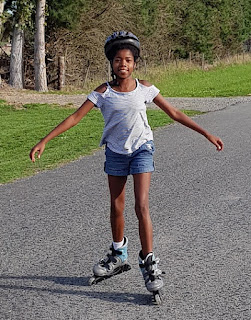 Sunday 4th: I decided to rather wait till today to take the children's photo so that we didn't just have school uniforms again. :-) It was so easy to get a great smile from Anastasia, but proved challenging to get one out of Asher today. I did love how Anastasia had put her hand on Asher's arm. And wonderful that Asher allowed it.

Rachel is planning an ice skating trip for her birthday and wants to practice on rollerblades a bit before she goes. Unfortunately the ones we were able to lend were just too small. They fit Ruth though, so she has been enjoying using them a bit. 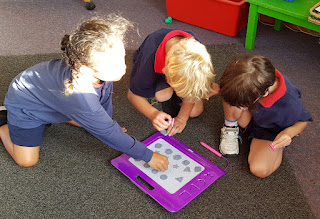 Monday 5th: It was so good to see Asher invite the children in her class to come and join her with her magnet board this morning. It's also great that she is not doing the very same thing every morning when she arrives (it was the magnet board every single day at preschool). 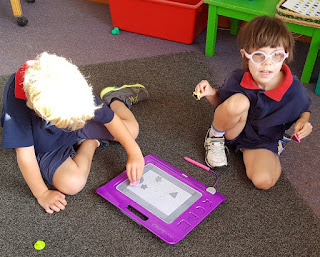 She even tolerated having him stop doing stamps and draw like this with his magnet. It's a big thing that this didn't stress her.

Asher only had a half day today and spent a couple of hours after lunch at home with Lynda so that I could attend her IEP at school (Individual Education Plan). We had a great meeting and it was good to get so many people from her team together to discuss things. I am so very thankful for all the lovely ladies that are involved in helping Asher with her education. We feel so very blessed. 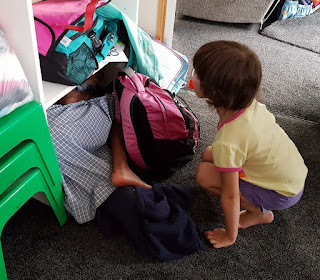 Anastasia was with me and she did wonderfully too. Fell asleep without any issue when she was tired and I was so thankful for how much she has improved (thankfully the months of crying with colic feel ages ago already).
Rachel headed to town early this morning for an Event Management Course (part of her high school NCEA levels). It's run from Monday to Wednesday, so she stayed with people in town to save of travel (money and time). She had a great time and did really well.
This afternoon Ruth was playing "hide and go seek" with Asher. It was sweet to see Asher go to the previous spot each time. At first she didn't even notice Ruth in there. It was almost as if seeing her leg wasn't enough.
Asher had a seizure at 8:30 this evening. Brendon spotted it on the monitor just as it started - so it was good we could be with her through it. She has had a 12 day break and so it felt so strange to deal with a seizure again and the restlessness afterwards. It took a while to get her settled but she then had a good night's sleep.

Tuesday 6th: Asher had her day off today as the teacher's aides all went on training today. It was a busy day for me having both little ones at home and Rachel away. The trickiest times being when I was feeding Anastasia. Thankfully Asher didn't try and get out the back door (as she can unlock it now).
We headed to bible study again this evening and Asher managed to fall asleep in the room with us. So sweet. And I'm so glad we could attend.
Posted by Buckland at 10:00 PM