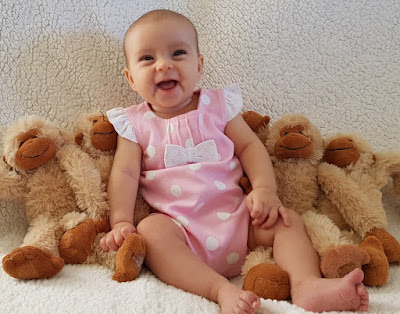 Wednesday 14th sees this little lady turn 4 months old.
Such sweet smiles and giggles from her. 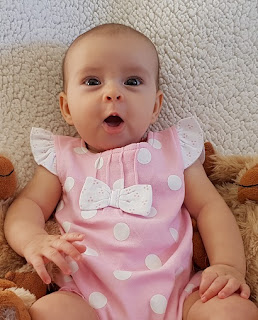 She "talks" so much too. Such a cutie. 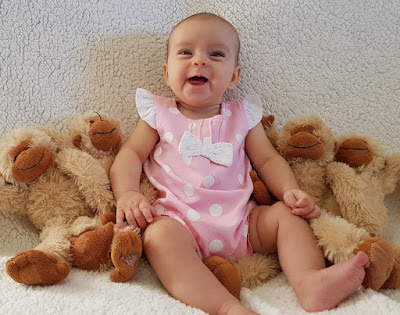 Such a lovely age. Over the nasty colic and so responsive. 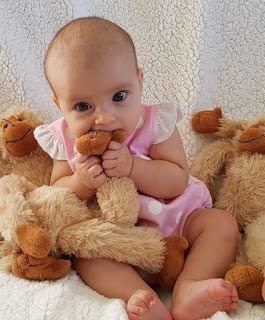 Getting everything into her mouth already. :-)
She hasn't put much weight on again and for some reason today I decided to get Hannah's baby book out to compare. Hannah weighed exactly the same at 4 months. So I don't need to worry. It was also good to look through the rest of Hannah's book and see that she didn't put loads of weight on through the rest of the year, so I can anticipate a similar trend with Anastasia and not be concerned about it.
On reflection I realize that I was more concerned this time because Anastasia struggled so much more with colic and spitting up. She also doesn't sleep as well as the others, so this all made me a little more concerned about her slow weight gain. I'm so relaxed about it now. I wish I had checked sooner. :-)
Below: It's fun to monkey around.
Although she has rolled from her back onto her stomach, she doesn't do it too often. 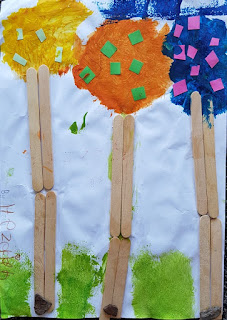 Hezekiah spotted this on my desk this afternoon and I wasn't sure if I had taken a photo or not. So I took a photo and he was happy to then throw it away. :-) It was a beautiful creation that made me think of the trees in the Lorax movie (exactly what they were meant to look like). Good job Hezekiah.

Over the last week we have started a new tradition for Hezekiah - rough time with Dad each day. At times Hannah (and sometimes Ruth) are happy to have pretend fights with Hezekiah, but they are getting less frequent while Hezekiah's need for them increases. So Brendon has made sure he gets at least 5 minutes (sometimes even 20 minutes) each day to play with him and give him that outlet. 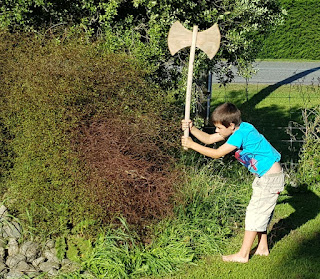 He had a great time this afternoon with Brendon, but then Brendon had to leave for Karate. Hezekiah isn't interested in going to Karate at this stage, but he obviously still had a bit of energy to get out. So he headed outside with his wooden axe. He knows those bushes need to be cut back, so he asked if he could try with his axe. I was happy with that, and he had a great time. 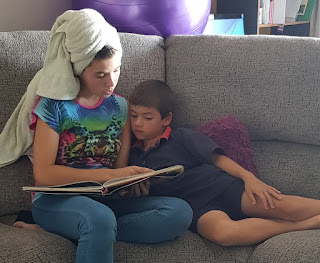 Thursday 15th: Asher had a seizure at 1:15pm today - so during lunch at school again. This time it was a normal Tonic Clonic, although it went on for a 1minute 20 seconds (rather than just under a minute). She was very restless for about 10 minutes but then had a 30 minute sleep. The strange one she had on Monday wasn't big enough to need a rest, so this was her first school seizure with a sleep afterwards. I'm glad it all worked out fine and she could join in for the last hour of the school day.
Hezekiah has a book to return to the library tomorrow, and I hadn't got very far into it with him. So Rachel helped read more to him this afternoon. 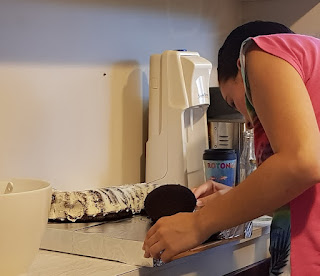 Her shower was a bit later than normal today as she had Hannah's cake to bake as soon as she got home. She needed to get that done asap so that it had time to cool through the afternoon. This evening she put a "crumb coat" on. A very thin layer of butter icing which will then sit overnight and makes it much easier to ice. This is one of the tips she learnt at the cake decorating course she did last month, so it's nice that she gets to use the knowledge so soon. 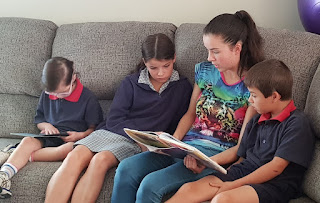 Friday 16th: The book was almost finished, so Rachel read the last couple of pages this morning. I think Asher thought it was time for a photo (and so hopped up next to them). I quickly got her a favourite book and she sat "reading" with them for a while. :-) 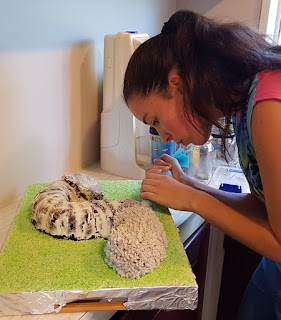 Rachel's main focus today was decorating the cake. She made her favourite Swiss meringue icing (which she discovered for Anastasia's birth cakes in November). She started with a very light purple and then gradually made it darker. It was a lot of work having to add colouring regularly, but it was so worth the effort. The effect was excellent.

She then made some more icing for the pink dots / flowers and the green grass and leaves. She has bought herself a nice big set of icing tips and a lot of different piping bags (some disposable ones as well as some silicone ones - pictured on the right).
I just love what she did with the leaves coming out of his mouth. And she did so well with the grass tip. I have never managed to use icing tips very well - so I was very impressed. 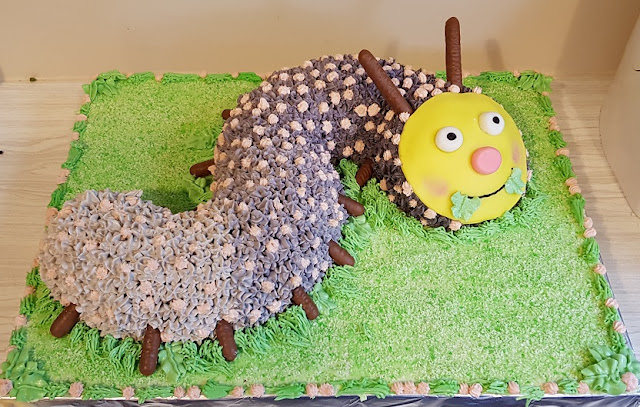 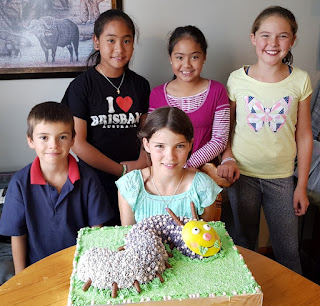 The 10 year old tradition is to have a sleep over. She invited 4 friends. One could only make it on Saturday morning and the two sisters just stayed from after school until 8:30. So they had a good time together. The friend who came on Saturday morning (just before 8am) also spent the whole morning with her and the sisters at the show. So it was a perfectly timed birthday with loads of time with her friends. 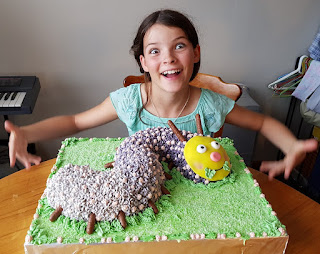 Hannah had chosen to have a caterpillar cake and she was thrilled with the results. She is also very excited about it being in the A&P Show tomorrow. So we didn't put candles on it and sing today. Rachel did make extra cupcakes though and so we enjoyed those together for afternoon tea. 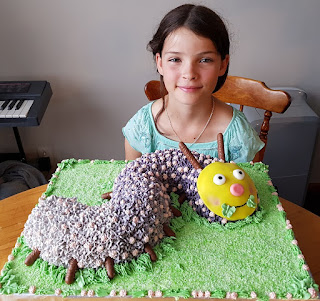 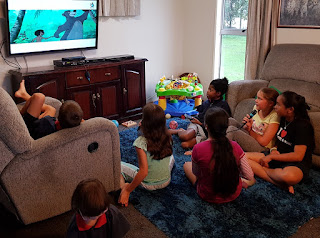 The girls enjoyed playing a couple of games through the afternoon / evening and then got into Sing Star and had loads of fun.
Hannah's birthday is only on Sunday, so she is having a lovely weekend full of fun. 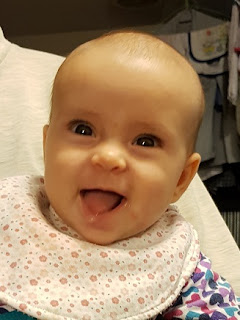 Anastasia loves chewing her tongue. I tried to get a photo but she just kept smiling at me. 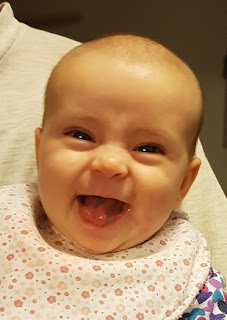