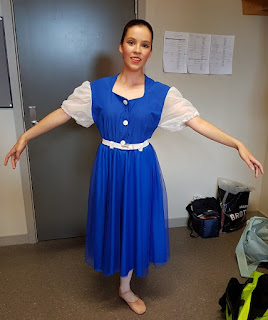 Rachel's first dance was the Phantom of the Opera. I didn't get to take a photo of her in that outfit. So this one photo will have to do.

The video is from the first show (that I watched). I didn't get to film the 2nd show, but she did so much better. In the 1pm show her shoe was falling off. The dance school teacher actually said she should dance in flats with the 2nd show as she didn't realize why Rachel wasn't up as she should be. When Rachel's teacher told her about the shoe, they agreed that she could dance in pointe on the 2nd show. And it was the best she has ever danced it. Thankfully they plan to put the 2nd show's dance onto the DVD we have ordered, so we will be able to get to watch that one too once the DVDs have been made.
Well done Rachel.

Phantom of the Opera 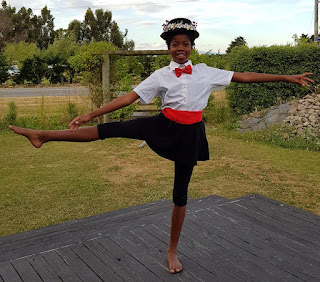 Ruth's ballet dance was Mary Poppins. I didn't get to take photos of the younger girls while we were there, and they changed so quickly after the show was finished. So they put an outfit on at home so that I could at least have one nice photo of their outfits.

They only got the umbrellas to practice with at the dress rehearsal. So they did very well having only gotten to do this twice with props before the show.
Well done Ruth. 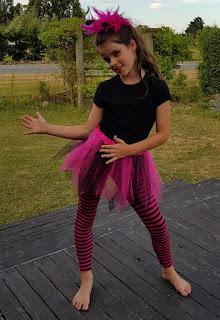 Hannah giving me a lovely fun pose in their jazz Time Warp outfit. Hannah was really good at the floppy motions in the dance. She was very nervous about dancing on stage and was upset about making a mistake. Thankfully Rachel could encourage her and let her know that she had made mistakes too.

Sound of Music: Maria. Part 1
I enjoyed this performance so much. Unfortunately my phone made her face very white. I hope you can still see and enjoy her lovely acting on this one.

Part 2: After a very quick change she then came back out for this 2nd part.
Well done Rachel. A wonderful show for your last year of dancing.
Posted by Buckland at 10:00 PM