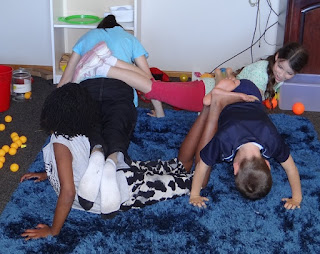 Tuesday 10th: Some fun and games this morning. 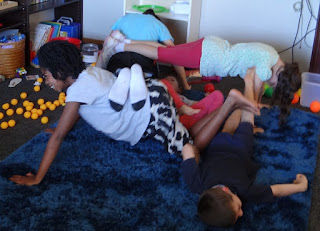 They did actually managed to get all 4 of them up (I just didn't get the photo). I just loved how Asher went into the middle to be a part of the game too (even if she didn't have a clue what they were doing).

Asher playing "hide and go seek" with Ruth. She doesn't really get it yet, but it's a start. 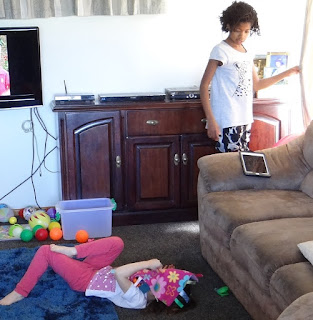 She loves having the thing over her face and saying "Where she?" "I can't" "see you". She doesn't manage all those words in a go. She says them in pairs, normally waiting for the other person playing to say the same thing before she moves on. She gets Ruth to lie with the cloth over her head too, but doesn't understand hiding herself yet. She just enjoys pulling it off and seeing Ruth's fun faces. 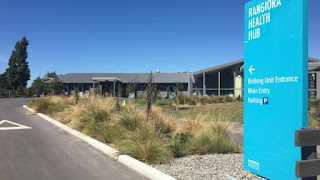 Wednesday 11th: Thankfully no cancellations today and Brendon and I got to have a look around the Rangiora Health hub. It was nice for Brendon to get to meet my midwife and it was really good for me to see the set up. During my check up she asked me if I had a preference yet (over home or at the hub) and I could honestly say I was still sitting on the fence with no preference at all. That changed within half an hour. 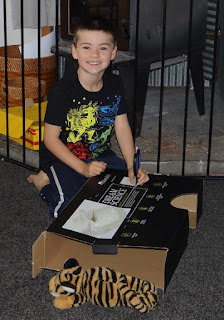 Having a look at one of the birthing rooms helped me to actually visualise the labour for the first time. It helped me to really think about what it would be like at home. It helped me to realize that if I was at home, I would constantly have Asher in my mind. My thought had been that if I laboured through the night, I may as well just stay home. I realized though that I would be constantly thinking about the time and hoping baby arrives before Asher wakes. And even during the night I would be thinking about her and hoping she wasn't having a seizure (even checking her monitor myself to make sure she was ok).
So I climbed off the fence. I now know that the only way for me to really focus on the labour and birth - without distraction - will be to be at the hub. What a contrast to all the other births, where I could not imagine being anywhere but at home. In many ways it makes me feel like a first time Mum - having no idea of how to know when to make the call to head in. I feel at peace about it now though and have actually started feeling excited about the birth. 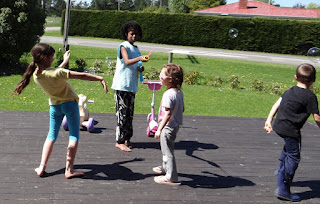 Brendon and I then enjoyed dinner out before heading home. A nice relaxing evening which I am really thankful for. A friend helped watch the younger children so that Rachel could focus on Asher. I'm thankful for them making it possible to just be out and be totally relaxed.
Above Right: Thursday 12th: Hezekiah making a "Secret Hideout" for his toys out of this box.
Asher had used her talking device to ask for bubbles, so Ruth obliged and had some fun with them outside. 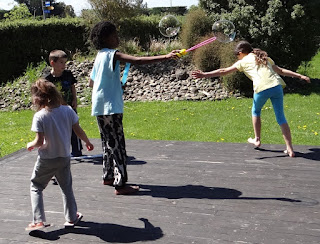 Asher does so love bubbles but can't say it very clearly. It's the one thing she knows very clearly how to find on her speech app. :-)

Seizure summary (as there is space here):
Asher had another cluster of seizures again this week. Thankfully she had a weeks break, but then it was rather busy (all 1 min TC).
Thu 9:30pm. She was restless before, sitting up in bed. So Brendon was with her when it started.
Fri 11:30am and again at 5pm. She was again very restless before the 5pm one, so I had already put a nappy on her.
Sat 4:30pm. 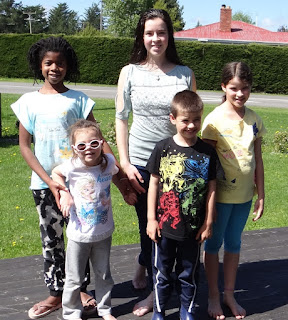 Nana sent us all some tops. Thank you Nana. 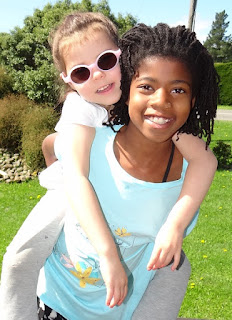 And thanks Ruth for the fun time outside. This is another "new" game Ruth has started with Asher (piggy back rides). She doesn't hold on well, so Ruth has to be careful. It's fun to see this fun new activity though. 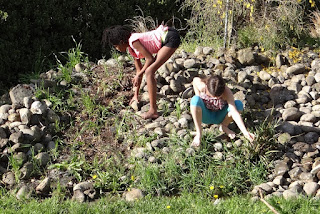 Ruth and Hannah earned a bit of extra pocket money and cleared the next section of the mound. They got it cleared and we got the next bit of underlay down. (It's taken a while to get the rocks back on - but at least the grass is being killed underneath it).

Friday 13th: An afternoon reading session. :-)
Rachel had gone for her restricted driving test on Wednesday and failed. It was very wet on the day and one of her "fatal errors" was that she was driving at 40 in a 50 zone. We felt she was most likely "driving according to weather conditions" but she took the disappointment well. 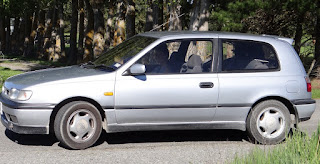 She has since heard of a lot of people failing on their first attempt (and often for silly things). So she didn't delay and booked to go again this morning. Thankfully she passed this time - which we were all very thankful for. She was especially glad as it meant she could drive herself to the selection camp this weekend. We were pleased we didn't have to take her on Friday and fetch her on Sunday. So it was very well timed. 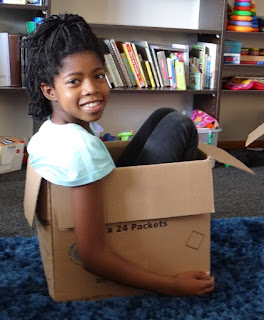 Saturday 14th: Ruth decided she wanted to sit in this small box. So flexible with those very long legs.

Below: A fun game of shop. These three often play shop. Thankfully they are good at packing it all away at the end of the game. 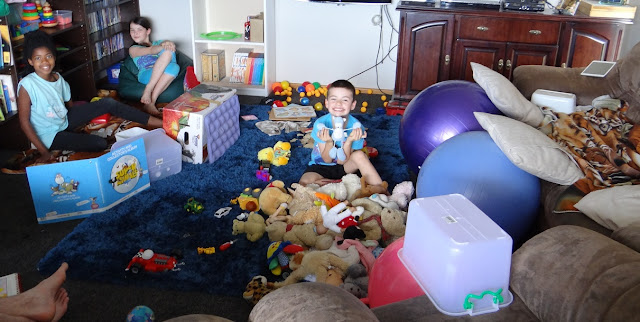 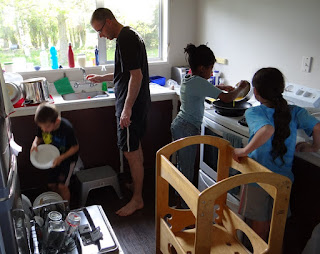 Sunday 15th: Hezekiah learning to pack the dish washer. Ruth treating people to omelettes and scrambled eggs for dinner.
Rachel visited the Sampson's for a couple of hours before heading home after camp (the camp site is very close to their home). She was home by 7:30 and did well despite her phone being a useless GPS. She is saving up to buy a decent phone (looking out for when there are good specials on).
Note: She heard on Monday afternoon that she didn't make it into the National Squad (the camp was National Selection camp). I'm glad she tried again, as each selection camp is another opportunity to grow and learn. And it's good to have peace knowing that God knows what the next 6 months hold - and all the extra training weekends was not meant to be a part of that.
Posted by Buckland at 10:00 PM