Pack up and carpets up 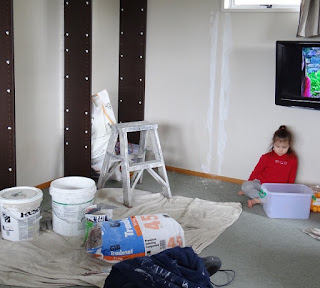 Friday 1st: Asher and I left early to take Anakin to the cattery. Then we headed into Amberley to fetch some "recycled curtains" from the mobile curtain bank. Thankfully I had previously send them measurements of our curtains, so they had a big bag of curtains ready for me to just pick up. People can arrive on the day and just look through what they have, but that would not have been practical with Asher. And then as we arrived she had a seizure. So I was especially glad it was just a "pick up". It will be so exciting to put up new (thermal) curtains in the bedrooms when we get back home after our time in Hanmer Springs.
I then needed to just get a couple of items at the shop. Thankfully friends live really close to the shop and so she sat in the car with Asher while I quickly got the shopping. I had done most of the shopping earlier in the week, but had these last "fresh" items to get. I know how expensive it will be to get anything in Hanmer, so I wanted to get as much done before we left.
Asher slept a little on the way home and then thankfully got more sleep in her bed. The photo above was taken once she woke up. The painter came today to start doing some plastering work. He just started working on any cracks that were easy to get to. Through the morning though, Brendon, Rachel and I got a lot of packing and sorting done and so could move even more furniture away from windows to give him even more access. Asher was happy to have her balls to play with, even with all the work going on around her. The painter just got a lot of "hi" greetings from Asher when he was working in the lounge. :-) 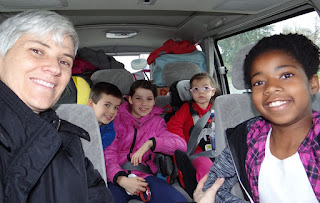 Thankfully Asher's EIE had said she could watch Asher this afternoon at her home for us. She called at 11:30 to say she was home, so Asher's lunch went with her and that gave us a free house to work in. I had gone out to the physio for my sore hip at 11:30 and it was so strange when I got back. I immediately looked around for the monitor (because Asher wasn't in the room, I immediately felt I had to watch her on the monitor). It was such a mental adjustment to not have her there. It made the packing so much easier though. I collected the children from school at 3pm and by 4 we were on the road. 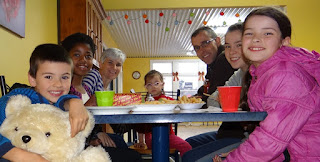 I had the 4 younger children with me (listening to a Boxcar children audiobook). Having the back seat of the van down gives us so much packing space. And then Brendon and Rachel took her car (giving Rachel driving practice too). We don't have a tow bar on the van, so this was the only way we could get all our stuff packed in. It also meant they can take the small (light on petrol) car back to the house on Saturday to do work. 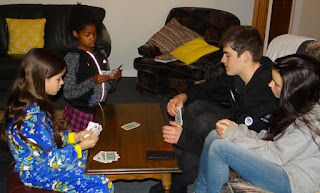 We stopped in Culverden for a Fish and Chips dinner. The first thing the children have been SO looking forward too. :-)
After work Daniel drove up to join us in Hanmer. The 4th bedroom is in a sleep-out, so he had that for the weekend. It didn't take long for the games to get started after he had dinner.

Early on Saturday morning Brendon, Rachel and Daniel headed back to the house. They had 3 other guys come and help and within an hour they had all the furniture moved into the garage. 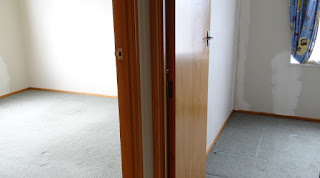 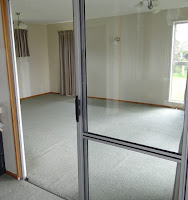 Morning tea break in an empty house, and then the three of them got busy taking the carpets and underlay up. 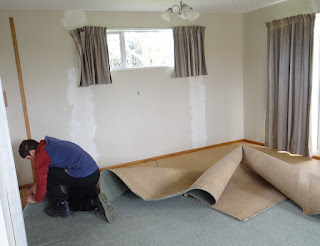 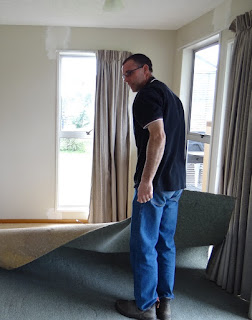 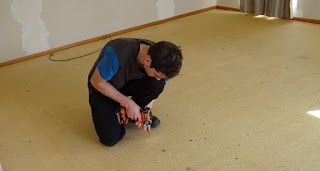 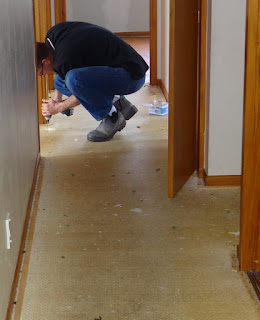 Then it was time to fix the floors. The floor boards had only been stapled down, so the earthquake had wiggled many of them loose. They got screwed down well today, so we are really looking forward to no more squeaking floors. By mid afternoon they were back with us in Hanmer. 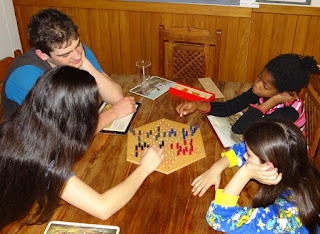 More games once the younger two were in bed.

It was a rough day for Asher. She had a seizure at 6:45am. She had come into our bed at around 5am and was having a lot of jerking. Just before the seizure happened she sat up and kept hugging me and then sitting up. I had just asked her "is a seizure coming" and it started.
She had another one at 12:30pm just after lunch. It really tired her out and she slept for a couple of hours rather than her normal 1 hour.
Posted by Buckland at 10:00 PM