Monday 19th: Rachel had her 2nd free driving lesson this morning. We had planned to do things the same as last time, and head to Rangiora for the lesson while Asher was at preschool. Unfortunately Asher's EIE has a major medical emergency in her family and so she is watching grandchildren - so Asher can't go to preschool. I wondered how things would go for the hour while we waited for Rachel, It went really well though. I brought her bag of church toys as well as the laptop with some DVDs. She happily watched Barnie and build puzzles while we waited. 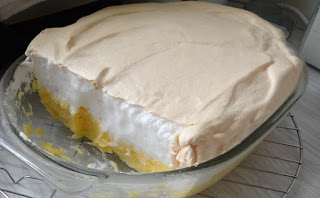 Asher missed preschool on Monday and Wednesday, so it was rather busy for me (and therefore not one photo was taken).
Thursday 22nd: Thankfully a support carer came over on Thursday while allowed me to get some things done, including making a sugar free lemon meringue pie. I have been wanting to try this recipe for a while, so was pleased to finally get it made. It wasn't wonderful at first, but it's grown on me though the week and I have loved having it as a snack option. It's wonderfully filling and is healthy too.

Friday 23rd: Brendon had today off and we headed into town with Hannah and Hezekiah for my 19 week scan. It's an anatomy scan, so it did get a bit boring for the kids. They were very excited about seeing how it worked though and then having lovely 3D photos too. She kept her arm in front of her face, but we did get a couple of nice shots. I love how much detail you can see (like the ear on the left one). 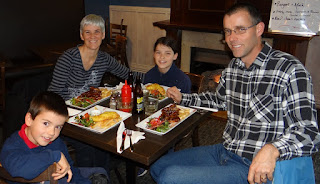 We decided to give them a treat and go to a restaurant for lunch. The same one we went to after the previous scan. We wanted to enjoy those spar ribs again. :-) Hezekiah and Hannah both wanted fish and chips and we had a nice meal together before heading home.
Brendon had actually taken Thursday off due to dizziness and flu symptoms. Thankfully a day of sleep helped tremendously and our plans for today were not affected. 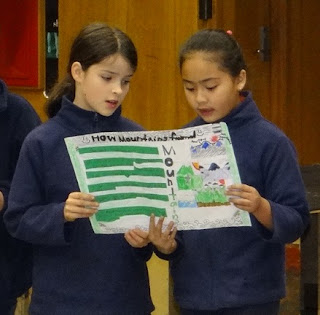 We arrived back just in time to get the children to their assembly. We were a bit early and so Hezekiah and Ruth got to show their classes the photos before assembly started. I always think it's so important for children to see how wonderfully these little babies are made - even when they are still so VERY small.
Hannah was pleased we were back in time because her class were sharing some posters they had made about land forms. It was also nice for Brendon to be able to attend one of their assemblies. 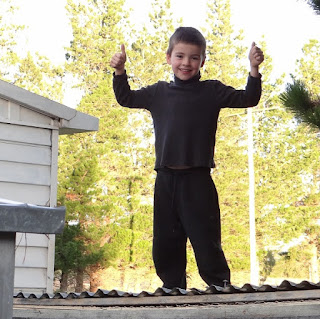 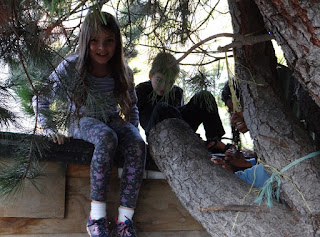 Rachel went out with the camera to get some photos for me (and so Hannah and Ruth went to join in the fun too).
I spent most of the afternoon in bed. I think the long morning out on Friday tiered me more than I realized. It's also been a more tiring week with not having those 6 hours with Asher at preschool. It was good to just take time to rest, as she will most likely miss next week's preschool too. 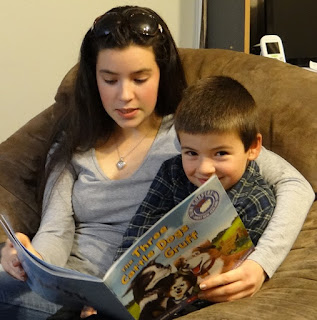 Sunday 25th: There was a shared lunch planned for after church today. On Saturday I had decided it was in the "too hard" basket. I felt more rested on Sunday morning and made a quick plan to just buy some hot chips to add to the lunch (rather than stressing about making soup on Saturday). I wasn't sure how Asher would do, but she was happy watching a Wiggles DVD while we had lunch. So it worked really well. I'm glad we stayed. The children are looking forward to the next one.
The children get book club order forms twice a term and I finally ordered some books on the last one (as there were a number of $2 books). They arrived this week, so Hezekiah got Rachel reading him "The Three Cattle Dogs Gruff" this afternoon. :-) Just after this photo she had to start again though, as Hannah wanted to be a part of it too. 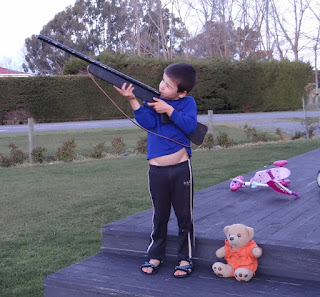 Monday 26th: Hezekiah got Ed the Ted from school again today. I love how it gets his imagination going as he immediately comes up with ideas of what to do with Ted. Hannah was very accommodating and played "Tag" with them. He then headed out to do some "Duck shooting". 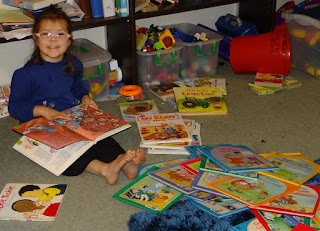 Every now and again Asher will go through these books. The funny thing is that she doesn't look through those colourful books (which have lovely stories about Alphabet Animal characters). She will always choose one of the children's body books to look through. And then she talks to me (in baby garble) about what she is looking at. So cute.
Posted by Buckland at 10:00 PM