Asher had a good nights sleep which I am really grateful for. I had enough rest, but it was a strange night. I woke when Asher bumped something and though the clock read around 6:30. I went to the toilet and was thinking about getting dress when I looked at the time again. I realised I had mixed the two hands up and it was only around 1:30. I had felt rested enough that I was convinced it was morning, so it was quite something to try and get myself ready for bed again. :-) Asher only woke just before 5 wanting to come to me (this is a great improvement as it had gotten closer to midnight when she was on the last drug trial. So I lay next to her for a while and eventually at 6 I could sneak out from next to her and get some things done before she woke just before 7.
There were a few things to get done this morning and so Asher eventually had her first "meal" at 9 instead of 8. The 1:1 ratio today means that she had 69% fat. Tomorrow it will move to a 2:1 ratio and it will be 82% fat (so quite a jump). Today is just to get her used to the keto shake and the extra fat content in her stomach.
The plan is to start giving the formula orally, but if it's too difficult for the child to manage, they often put a Nasal Gastric Tube in. This means the food can take a good hour to go in, and it's just "no hassle". After the 2nd feed I was starting to wonder if we should put a tube in. Asher would take sips, but it did take an hour to get her to have each meal, and there were times she just didn't want any. I soon realised that if I found something to distract her (like a new DVD) then she would manage to get more in. I chatted to Brendon and we decided we would try and put the tube in, as then it was ready if it got really hard later in the day or even tomorrow.
Unfortunately Asher would have nothing to do with it. On the fist attempt she pulled it out before all the tape could be put on. She is so strong that we had to call an extra nurse in to help hold her down. Even with 3 of us holding her down, it was really hard and even with all the tape on, she pulled the next one out as soon as we let go of her hands (even though we were trying to keep them away from her face) - she was just so quick. 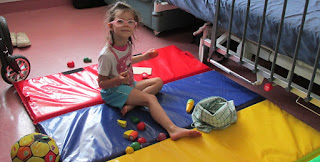 So I had to keep going with giving her sips. It's too rich to drink quickly. By the 5th meal (not 6 today as we started late) I had to use a 10ml syringe for the whole meal. She was just not interested in drinking it at all. Thankfully she took it ok from the syringe, so we got it down. The 5 meals took me a good 5 hours to give though. So it was a rather tiring day. The play area was a great help though and on our last visit we were given this big mat to borrow (as well as the ball). We had already taken our 3 things out the "library" section of toys, but these two were a nice addition (so I was thankful they were not sticky about the "3 items" - probably because there are so few children here today).
The play area also lent us a small DVD player, so Asher is able to watch her own DVDs and we can change them as often as we like. At home I have been making an effort to get Asher to finish a DVD before getting another, but today we just changed as often as she wanted to (so that she was relaxed and fully interested in the DVD so I could sneak the food in). 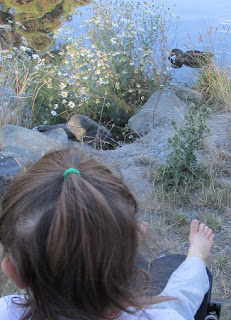 Before the last feed began, we went out for a walk. We will have to see if we can find some old bread crumbs for next time. The ducks seemed to come over wondering if we had anythign for them. 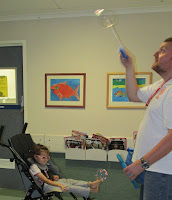 When we got back she was entertained with some bubbles (volunteers who come to entertain the children in the evening). The nurse was with Asher, so I could get the next meal ready. Our scale should arrive tomorrow, and then I can make them up in our room. 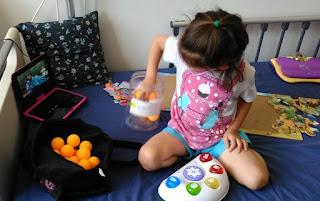 Here are some of the originally missing photos from my phone (I have struggled to get them off my phone and onto my computer - but finally managed). I'm using an old camera this week and only realised when I got here that the battery was flat. Although I had brought the usb cable, I forgot that it has a separate charger (you take the battery out the camera to charge).
The table tennis balls from home already being well used. 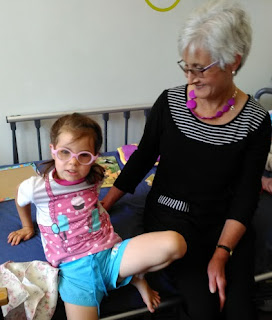 By the Lord's great providence, Lynda was coming into town this morning, and so she popped in and brought a few forgotten items from home (including more tins of the formula which I had not known I needed to have with).

She found a pram in the play room too.

I printed out this page so keep track of things through the week. It was a bit discouraging to see the Ketones drop this evening after having come up slightly this afternoon. It's all so very new though and the .4 is very low, so I'm not stressed about it. I didn't think there would be any Ketone measurement today anyway. So we will just wait and see how things go tomorrow.
Please especially pray that Asher will tolerate all the formula through the days ahead. The formula is the easiest way to make sure the diet is 100% accurate, and it can easily be adjusted too. Once we find the perfect "prescription" and ratio for her, we will be able to start introducing foods that are prepared with that ratio / prescription in mind. So the formula is not a long term thing, but more a tool for starting and a good backup if a meal is every dropped or something else comes up.
Posted by Buckland at 10:50 PM