Bread, bubbles and a bad reaction 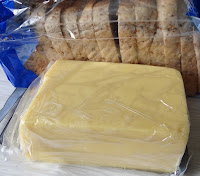 Sunday 8 Jan: It is always so wonderful to look back over the day and see how God has orchestrated so many little details in our lives. Let's see if I can do this in point form.
~ 2 Jan - HelpX contacts me, I must update my listing as it's 6 months since last update, and may disappear.
~ 5 Jan - I update my listing.
~ 6 Jan - I get a request form Arianna to come from Monday 9 Jan. I offer to meet her in Amberley on the Sunday if it would suit - but plans are made for Monday.
~ 7 Jan - Arianna lets me know she would now prefer Sunday morning. She will meet us at 10 for church. 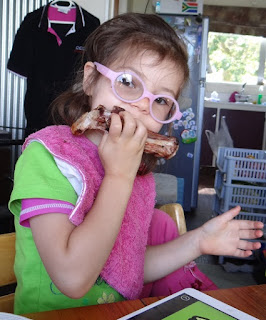 ~ 8 Jan - We leave 15 min early so I can get some items at the shop before church. As we drive past the bus stop I spot Arianna (they were 15 minutes early).
~ We go to the shop together, I'm able to buy the cereal she has for breakfast and some bread for her (special "2 for" deal - so I get 2). The bread is next to the cheese but I can't remember if we need or not - so I buy a block encase.
~ Other story: Sunday morning Daniel lets Rachel know that he will be attending church with us again as it's closer for him to get to the CEF camp where he needs to be at 1.
~ We offer to bring lunch for him, and quickly get some tuna mayo made to make sandwiches for lunch.
~ We arrive at church and Daniel is there with 3 of his brothers! As the Lord had planned, we have a spare loaf of bread and a block of cheese, so we are able to invite them all to join us for lunch.
~ I'm glad I updated you yesterday on how well the visual aid worked at church - no space for that update here. :-) 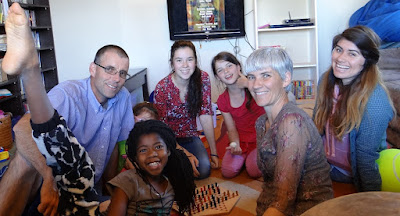 We had a great time at the park. Everyone chatting and teasing and getting to know one another. The younger kids enjoyed the park too. At 1, just as the boys left for camp, Asher had a 3 minute semi-conscious seizure. Her eyes and head were pulling to the side but she was able to try and talk to us. We couldn't understand what the words were and it was really strange for her to be trying to talk. When is stopped she was back to herself and didn't nap for the trip home.
Arianna got to work immediately and got stuck into the kitchen as we chatted and sorted things from the morning. 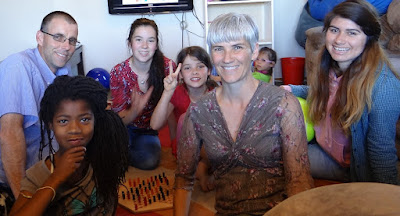 In no time the dishes were done, bread was on (having shown Arianna how to do it), all the counters were clean (and clear) and the stove was spotless too. I love how much it helps having someone cleaning with you - it made my job of sorting and packing things away so much easier.
We had taken meat out for a BBQ lunch, so ended up having the BBQ for dinner instead. Asher does love chewing meat off a bone.
And then we had a game of Chinese checkers. Brendon won AGAIN!!! 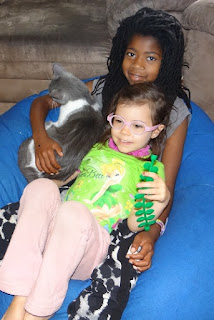 Monday 9th: Ruth just loves getting cuddles from Asher. Often she tries to hard, so misses out. She was thrilled to have "two babies" on her lap today. 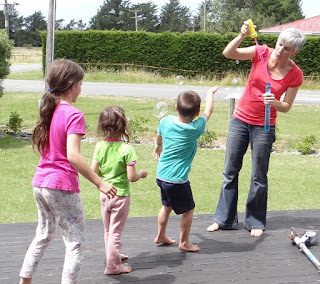 Bubble fun. It was so windy that often I could just lift it out and the wind blew huge bubbles. We called Rachel to take some photos, and the sind died down. ;-)
I just loved hearing Asher saying "Wow" every time. She had so much fun - as did Hannah and Hezekiah. 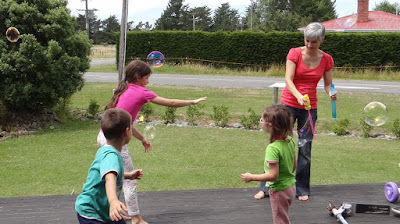 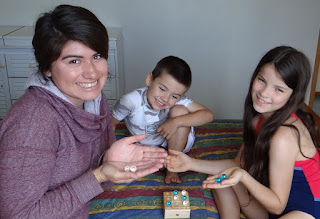 Arianna got into her cleaning today and started with Hezekiah's room and then did Hannah's. I had read the feedback that Arianna's previous family had given about how she worked through each room and cleaned it thouroughly, even sorting shelves. Well - I got to see it today. Ever piece of furniture got moved and cleaned. Every wall got washed. Every cupboard got unpacked, cleaned and then I helped sort and re-pack. It was a great oportunity to get some sorting done. Thankfully those two cupboards where sorted last year, so it was just a quick sort and re-pack. 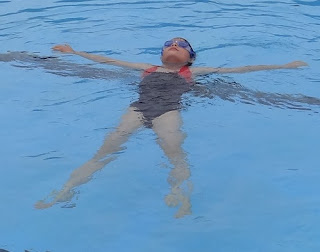 Hannah was SO pleased when Arianna was finished with the bathroom in the afternoon - she finally got to play her first game with her.
These two were in the togs early, waiting for Dad to get home so they could head up to the pool.
Hannah showing off her floating. 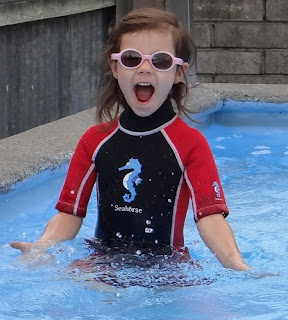 Asher had a ball. 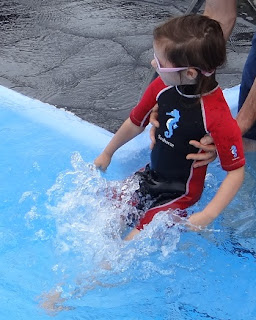 And Ruth brought her ball. She got this as a reward for doing another one of her Summer Reading check-ins. 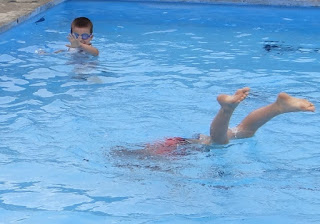 Hannah showing Arianna one of her hand stands. I was also so pleased to see how much more relaxed Hezekiah is in the "big pool". It sure helps that he is that big bigger this season, and can stand with his head out. It was great watching him walk around the shallow end. 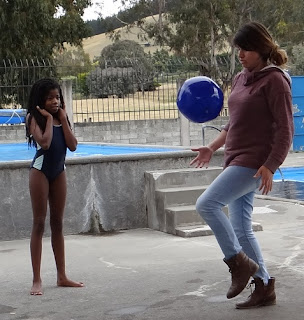 While I held Asher to get her warmed up, Arianna got the others warmed up by playing with them. 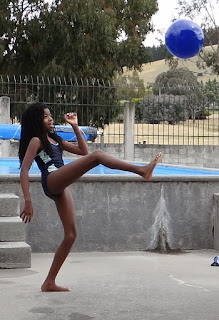 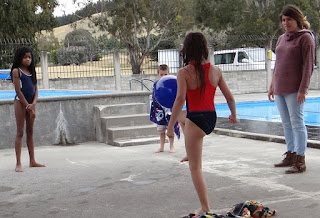 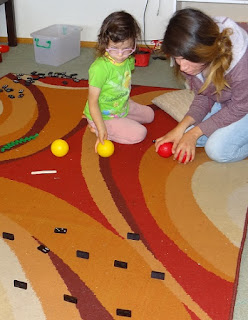 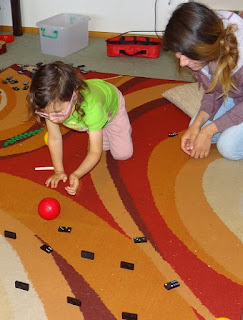 And then a game of "Uno". The children loved learning some French from Vanille - so I wasn't surprised that they are already learning some Spanish from Arianna. During the game Ruth clicked that Uno is Spanish for 1 - and you say it when you have 1 card left. So it was appropriate that their first card game was a Spanish one. :-) It does help that Asher watches Dora and Diego - so they have picked up a bit of Spanish from there already. Arianna is just helping them with better pronunciation. 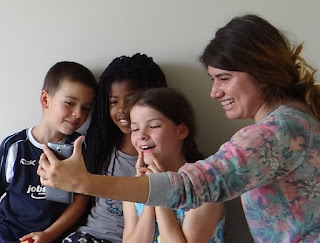 Tuesday 10th: This morning I had a lady from Talk Link come and do an assessment for Asher. It's "Assistive Technology Services" so for Asher it's mainly looking at devices / apps that can help her with her speech. She is now going to put in a request for a 2 week trial of a device with an app (once the term starts) so that Lynda and I can work with it and see what we think of it. We could possibly trial a couple of apps and then if we find one we like we go about trying to get some funding for her. The lady was lovely and it was a nice time sitting (on the floor with Asher) and chatting. She helped me to see what wonderful potential these apps can have.

This afternoon I head so much laughing from the room that I headed down to take a photo. They were having so much fun on Snapchat. Arianna shared the photos with me - so I get to share them with you. Some very funny puppies got them giggling.

Hannah was a very beautiful princess, while Ruth was rather posh. Hezekiah was downright hilarious though with those big red eyes. He had tried to explain to me about needing to open his eyes wide so that they show red on the photo. Only when I saw this did I fully understand. So much fun. 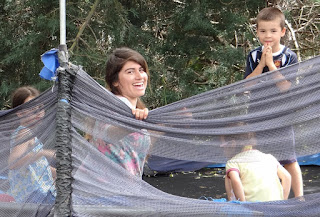 Arianna tackled Brendon and my room this morning as well as doing the broom cupboard (which needed a lot of sorting) and the toilet. Now that all the cupboards have a bit of extra space - it's been great to put things in logical places and just feel there is enough room for everything. I had a lot of work in sorting all the things that have piled up in our room. It was good to finally get them moved to where they needed to be.
They all went outside for a play this afternoon. I asked them to stay on the deck, but Asher kept wanting to go to the trampoline. So I finally just said it was fine - let her have some fun. They had such a fun time too. I asked Rachel to get a photo and she got this lovely one of Arianna. Ruth was out there too - and she was the big voice that called me when Asher's seizure started.
I actually had a timer ready (I worry about that tramp with her), so got that started and ran out. I got her inside and we all sat around her encouraging her and praying for her. It went on for 12 minutes. Poor little girl. 2 doses of Midaz on board, and I think it's having a bad reaction with the new drug she is on. She was in agonising pain afterwards. I have never seen her so sore before. She cried almost the whole time for almost an hour (with just a minute or two here and there when I managed to get her to calm and rest). 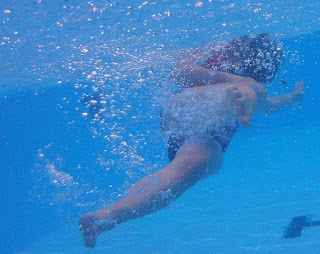 Finally after an hour she fell asleep and had a good solid hour of sleep. When she woke (5pm, 2 hours after the seizure) she was still very disoriented and was staggering as she tried to walk. She also just looked drugged when you looked at her face. I popped out to the shop and apparently she didn't stop crying while I was out. She just wanted me and was so unhappy. We tried to give her food (she hadn't eaten since lunch) but she was just too unhappy and got upset with us when we offered her anything. Eventually at 7pm (4 hours after) she was calm enough to accept some food. We will contact the doctor about this and do pray for wisdom for us and the doctor to know what to do.
While I was trying to help settle Asher after the seizure, Brendon took the children to the pool (they had been so looking forward to going again as it was so VERY hot this morning). I finally remember the waterproof camera we have borrowed, and so they took that with. They took more video than photos by mistake - so will hopefully get another opportunity to use it.
Posted by Buckland at 10:00 PM