A year 1, a corporal, and a class change 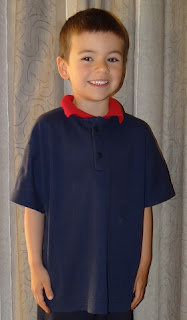 Monday 10th: Hezekiah's official "first day of school". He is very pleased to have the proper shirt and was so excited about today. Such a big boy already. 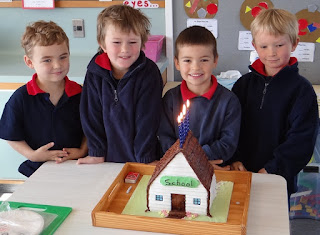 I had put the left over cake in the freezer and took it out last night. I was thrilled to see that it froze well, and so I brought the 2nd half up to the school today for their morning tea. There are 4 boys that have turned 5 in the last month, so it was nice to sing to all of them. 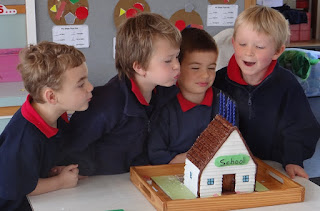 And they could team up to blow the candles out. There was still so much cake left that we even got to give to the whole of the next class. 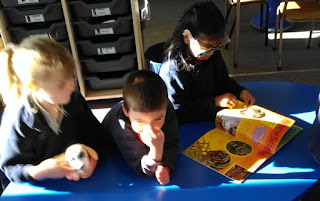 I took this photo when I dropped him off this morning. He had brought his "3D bug book" with and so it was a great to have him surrounded by friends as they took turns having a look. Eventually I was able to get a photo of him (before this there were 6 children around him - all patiently waiting for their turn). So it ended up being a very good idea of Hezekiah's to take it with today. 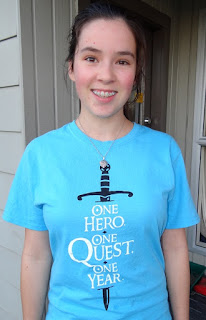 Brendon had taken the afternoon off as I had a dental checkup (thankfully all is fine) and then Rachel had an orthodontist appointment. She went for light blue bands this time to match a dress she is wearing to a formal at the end of the month. They also happened to match the T Shirt she was wearing on the day. She bought this and a hoodie from the USA - through the One Year Adventure Novel curriculum that she did a while back. She is still on the forum and has contact with a few kids in the states as well as two girls in NZ who are also on the forum. She was very excited that they had arrived while she was at camp.
At 4:30, not long before we got home, Asher had a 1 minute Tonic Clonic. Brendon said it was really violent with her going very blue around her mouth, so I'm pleased it was short. We are also thankful that she didn't have a seizure yesterday. For the previous 5 Sundays (the day we do her medication decrease) she has had seizures. So although not totally surprised that she had one, it was great that it wasn't on the Sunday. It may still be related to the decrease, but we are almost there with getting her totally off it. So hopefully things will settle down soon. 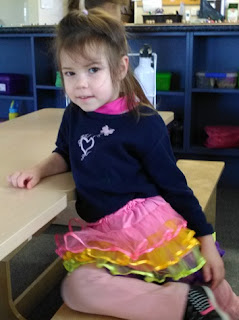 Tuesday 11th: When I collected Asher from preschool today she had this pretty little skirt on. She looked so cute. I didn't have my camera though, and I think this questioning look is because I was using my phone to take a photo. :-) 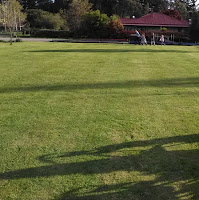 This evening we went to a family dinner at the farm. I again forgot my camera! This does give a nice idea of what a lovely evening it was though. 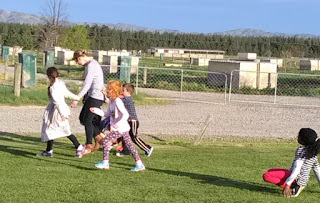 Holly ended up playing with some of the children which they really enjoyed. Hannah was thrilled to have Anica and Carina there too. They had a great time.
Brendon and I spent most of the time running around after Asher. There were a number of children present, and a whole range of ages. It was a reminder for me of how much harder things are with Asher. As her OT said on Wednesday "it's good to be reminded like this as to why you are so tired." 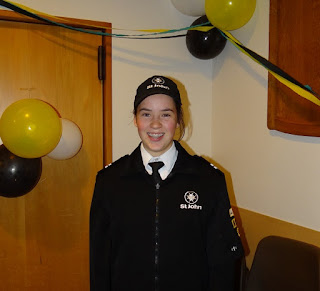 We ended up being one of the first to leave the dinner as Asher needed her evening meds and I needed to head off to pick Rachel up. Their St John Division was having a 10 year anniversary party, and so she had chosen to attend that instead. Later I found out that she was getting her promotion tonight, so I was glad she went. It was a pity I could not be there with her, but I made sure I had my camera when I picked her up so that I could get a photo there. 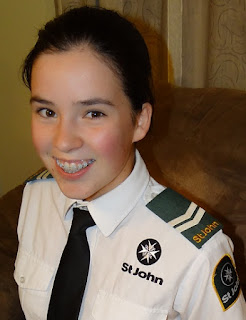 And another photo at home, showing her stripes on her top. She had finished earning the promotion a while back, but there kept being hiccups in getting it presented. So it was lovely that it was presented at such a special event. 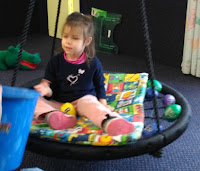 Wednesday 12th: Champion Centre again today. Even though she has had a 2 week break, she fitted right back into things. I just forgot my camera - AGAIN! 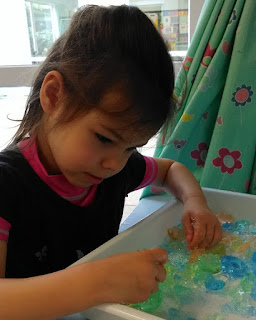 Emma had even bigger gel balls today (the size of an egg). Asher was last in the playroom, so she could squish them to her hearts content. Emma had specifically kept some nice big whole ones for her to break too. Emma got some photos of those. She enjoys it so much and when she broke the big ones she would look up at Emma and I with such satisfaction on her face. 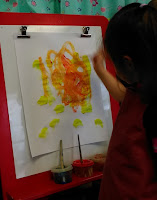 It was nice to see her spend a bit more time painting today. Lately she has only done a couple of dots and then moved on. 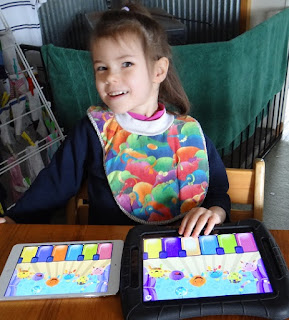 She has taken her "2 games at once" to another level. At lunch today, the iPad needed to reboot. So I got the mini for her while it restarted. Once it was on though, Asher decided to use them both. She had so much fun. 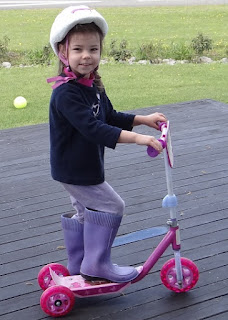 As Wednesday is the quietest afternoon, it's a good time for Brendon to BBQ some meat (especially with me being "home along" on Thursday morning with Asher - it gets Thursday's meat sorted). Asher always loves going out with him. It was lovely today to see how quickly she had adjusted to her scooter. Again she wanted Ruth's big boots, but she did really well on it.
Thursday 13th: The big news for the end of the week is about Hannah's school class. On Wednesday after school I went with Hannah to her class to find out more about her homework for this week. She had again missed some information that the teacher had given on Monday. So it was good to clear that all up. I ended up chatting to her teacher about some of my concerns with Hannah. She is in a very big class of combined year 4 and 5 children. I think it's around 28 children. So Hannah is just hiding in the crowd.
Hannah's class situation has been on my mind for a while now, so after chatting to the headmaster on the phone on Wednesday afternoon, and then seeing him on Thursday just before school finished - we finally had a conclusion on Friday morning.
To cut a long story shorter, a discussion was had between the headmaster, the primary head, Hannah's current teacher and the year 3 teacher. They are happy with my request that Hannah join the year 3 class for this last term. The class is so much smaller with just 16 children (including Hannah). There are 3 other year 4 children in that class who have joined the school later in the year (and could just not join the 4&5 class as it was too big). Annica was one of those new students. When I asked Hannah what she thought of my idea earlier in the week, she was so excited. When I got the go ahead on Friday morning and told her, she was ecstatic. We stopped past her "new" class on Friday after school and she was so excited. She will join the class from Monday and I know she will really enjoy the time she has there. I am confident she will benefit in many ways from the experience.