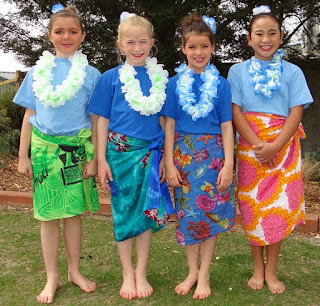 Monday 19th: Production day has finally arrived. Rachel and Hezekiah watch the production at 1pm today. I managed to get some photos before it started.
Don't they look great. 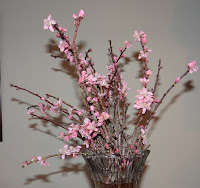 I only just managed to get this one of Ruth as she was in the main cast, and just about to go in. For some videos of the production, have a look here. I took them on Wednesday night when Brendon and I got to watch it.


Just look at how lovely those blossoms are looking.

With Brendon spending most of the day in bed today, he didn't go to karate this evening. Hezekiah got dressed in his gi as he often does when the girls get ready. So I asked him if he wanted to with them tonight. He was SO excited. 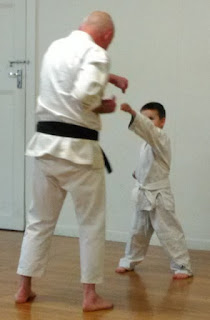 I expected to stay for just 15 minutes with him and then bring him home. He surprised me by staying really focused and listening so well.
Thankfully the 2nd sensei arrived and gave Hezekiah some one-on-one time while the others practised their complicated katas. 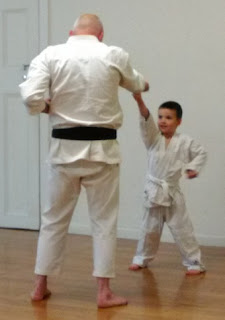 At one point Hezekiah was a bit distracted by their loud shouting (kiai) and so Bernie asked if he wanted to watch them for a bit. So he watched for a bit and then Bernie called him back to do some more work.
Bernie was so very good with him. 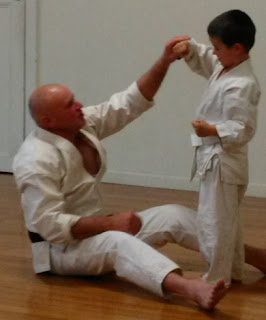 Hezekiah was struggling to stand on one leg for his kicks, so Bernie got onto the floor. I only got a photo of him explaining the blocks to him, but he also helped him so much with the kicks in this position. Hezekiah could hold Bernie's one arm while Bernie used his other arm to direct Hezekiah's leg and explain exactly where it was meant to be on each count.
It was a great first session and he is very excited about going with them next term (they will miss Wed because of production and then it's 2 weeks school holidays). 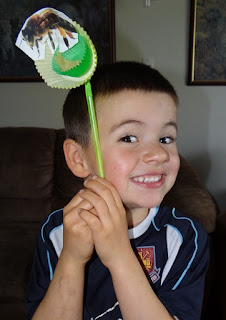 Tuesday 20th: Hezekiah is learning about bees and pollination (in a simple way) at preschool and so had this song to sing for us today. 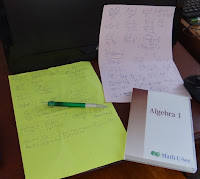 I'm having a Math week with Rachel. She has been plodding away with her Math on Monarch, but has some gaps. Unfortunately I only noticed after a couple of months of her struggling. So we got the Math-U-See DVDs out. I had bought the Algebra 1 by mistake when she was meant to go onto pre-algebra - but then started Monarch, so never used them. Already the videos she has watched have been a great help to her. So she is going back and filling in the gaps. 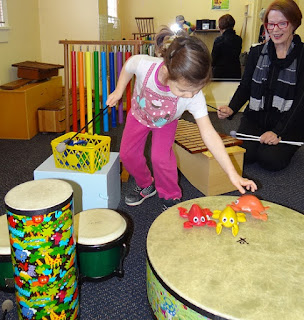 Over the last week or two we have been looking into Rachel starting with her NCEA Levels once she turns 16. She can do these through Te Kura - The Correspondence School for free from when she is 16. If she plans her subjects well, she can also potentially get University Entrance with her NCEA Level 3. She is very excited about it all and is motivated to get it done as quickly as possible. Now to just be patient as she waits for the next 6 months to start. 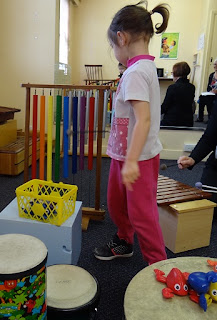 Wednesday 21st: I remembered to get a photo today of the big drum and the frogs. It was even better today as she included the vertical chimes in the pattern. She would make a nice long stroke along all the chimes and then place a frog. Ali sang a song along with her and really enjoyed it.
Ali explained to me that these music sessions are normally totally child led. She does however see now that Asher does get very stuck into routines. So she is happy for me to introduce new ideas (like the frogs on the drum) to stimulate her creating new patterns and games. I am so glad we had this breakthrough. I am so excited to see what she will come up with in the months ahead. 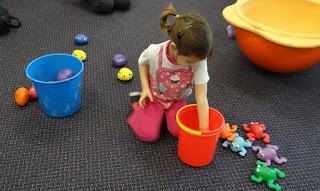 As it was the last day of term, a teacher was away, and Ali had to leave early, the whole day was a bit different. Most of the children just enjoyed free play in the two play rooms. Mariana is very aware though how much Asher enjoys routine, so she offered for Asher to at least have two early sessions - the one with Ali and then one with the speech therapist. I was so thankful for this. It did help Asher so much today. 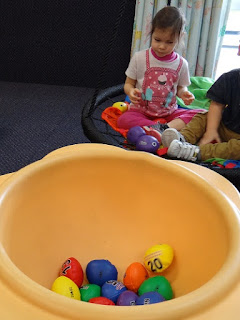 Once she had her two sessions she headed to morning tea. It wasn't long and she wanted to get out of that play room though. I wonder if it's because of how busy the room is. Not only with all the pictures on the walls and toys around, but also 4 other children with their carers. She was thrilled when she was allowed in the play room next door (where she normally does fun physical activities with Mariana). I think she thought it was just a normal session with Mariana, but then other children came in to join her too. It was great to see her coping well with changing her game slightly (like taking turns) when others came to play with. She had so much fun with the bean bugs and frogs. Asher and one of the boys sat for ages on that swing and threw bean bugs into this big bowl or a bucket that I had. At one point it was a game of throwing them bean bugs anywhere but into the containers. It was a really fun morning for her and wonderful for all of us to see her interacting so nicely with the other children. A clear benefit from her regular time at preschool. 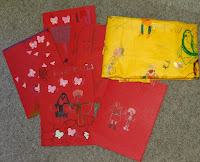 I got a lovely surprise this afternoon. Ruth brought a pile of cards and a present from the Whero class - for helping with making their tops for the production. So sweet of them.
In the evening Rachel stayed home to look after Asher and Hezekiah and Brendon and I got to go and watch the production. What a treat for us to go out in the evening, and wonderful to see the girls doing so well in their production. It's been a tiring week for them with the production on Monday afternoon and then the two evening performances which only finish at around 8:30. 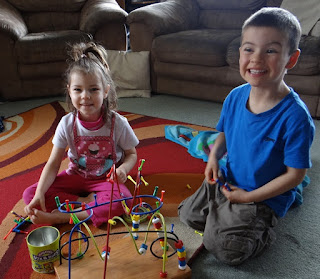 Thursday 22nd: I always have a big of a challenging morning on Thursdays at home with these two while Rachel is at work. Thankfully Asher is quite used to following me when I say I need to go to the toilet. She just knows to go with me (as I can't leave her on her own for even a couple of minutes). It's always lovely when Asher and Hezekiah get to enjoy a game together. I was hunting for something metal for them to use the magnets with, and this worked nicely. We are going to miss him next term once he starts school. 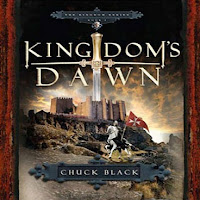 I'm starting to really look forward to the ballet travelling as we have started listening to the Kingdom Series. Rachel got these audio books ages ago (and I listened to them at the time with Rachel). It's so nice that Hannah and Ruth are enjoying them too now. Hannah especially enjoys telling me about all the biblical links that she picks up on. They are great books and I can highly recommend them.
Hannah is very excited as she is also going to join Ruth now in the opening scene at their production. 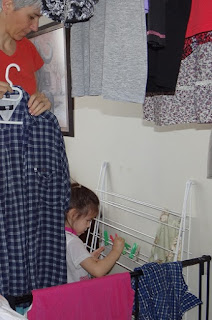 Friday 23rd: I often have washing to put up on a Friday morning and I try and get it done before Josie arrives to watch Asher - as Asher always wants to help. Today she was not happy to just pass me the hangers, she wanted a 2nd thing in the pattern and so started putting pegs on the clothes horse after each hanger passed to me. It's incredible how much she enjoys having 2 activities going at the same time.
I was especially thankful for the time that Josie was here today. Rachel and I had so much to do in the kitchen and got so much done. 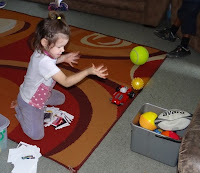 This afternoon I suggested Asher try throw the balls into a bucket (rather than just across the room as she does every afternoon). After our Champion Centre visit on Wednesday I thought it would be really good for her to work on her aim in this way. 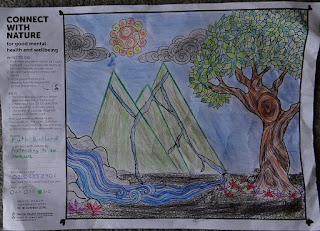 It was the last day of term today. The girls are looking forward to the 2 weeks of holidays. They both came home with colouring in competitions.
This was Ruth's creation. 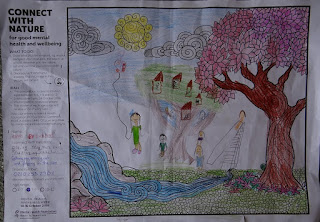