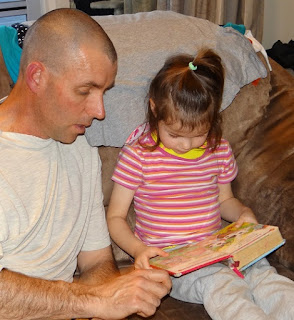 Monday 29th August: It was lovely to see Asher bring books for Dad to read to her this afternoon. Previously she would only page through this book quickly (never stopping for anyone to read anything). The only page she would stop at was Humpty Dumpty (her favourite nursery rhyme). 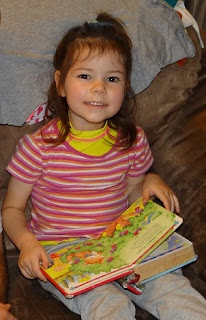 Today, she allowed Brendon to read from every page. Half way through he had to start going really quickly or just doing the first half - but it was still a huge improvement.
Tuesday 30: Asher was up early today and at 7am she had a 1 minute Tonic seizure. Thankfully she didn't need a full hour sleep and when she woke she happily ate her breakfast. She headed off to preschool but it was noticeable today that she was not 100%. She was a bit more rigid and not as caring with the other children. It seems she may have also had a tiny little vacant seizure while on the swing.

She got off and wanted a cuddle and just sat quietly for a little while. After her little rest she was up and off to the sandpit for more fun. On reflection it was interesting to note that we have never seen a deterioration in her behaviour after a seizure before today - but that made me so very aware of how much her behaviour has improved over the last months. Unfortunately she had another seizure at 5pm, 1 1/2 minute Tonic. Thankfully it was just the two though and she had a good sleep that night.
Exam day for Ruth today. I had to fetch her from school at lunch time so that she could shower before we left at 1:20. With her hair wet it made it much easier to get it into that bun. After we had taken the net off I realised I should have taken a close up photo of her hair. It looks so good. We put a huge effort into getting it all tightened over the last month in preparation for today - and it was worth the effort. It looked really good.
There was no crack in the door today, so I could see any of her dancing. I am sure she did really well though. I could see the nerves starting as the previous girls came out. I prayed with her and was sure she would relax within a couple of dances as she had with her practice exam. She did grade 3 today (after doing grade 1 last year). She got high honours last year - to the utter surprise and delight of her teacher who said she had never seen as high a mark before. Ruth is really hoping she can get high honours again. What made it harder this year though was that she was the only one doing this exam. I know she has done well. We all just excitedly wait for the official results which we should get in a couple of weeks. 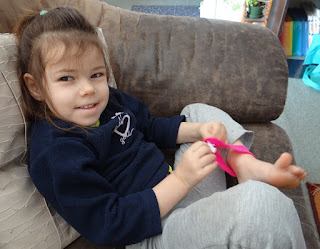 Wednesday 31: We had Asher's IP (Individual Plan) meeting at Champion Centre today. So Asher stayed at home today with Rachel, who had a bit of time off with Josie coming to help. I thought this would be easier for Asher and Rachel than having them do all that extra driving. Lynda (her EIE at preschool) and I had both written pre-IP reports and Lynda came for the meeting too. It is always great to be able to look back and see how much Asher has grown and how much she has learnt over the last 6 months. It was also good to talk about some of the challenges that she faces and what goals we can make. Some areas had multiple goals, to help her step by step through the learning. 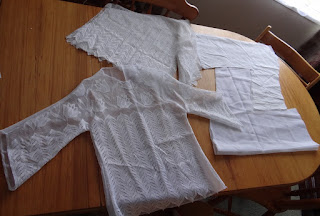 Jackie gave me some little felt strips with buttons for Asher to play with and she enjoyed putting them on her ankle. :-)
While Asher slept this afternoon I headed up to the school to help with sewing for the school production. One project I started working on was little white tops. I took the material home and finished them up on Thursday afternoon while Asher slept. They turned out quite nicely and I'm sure the girls will look lovely in them. 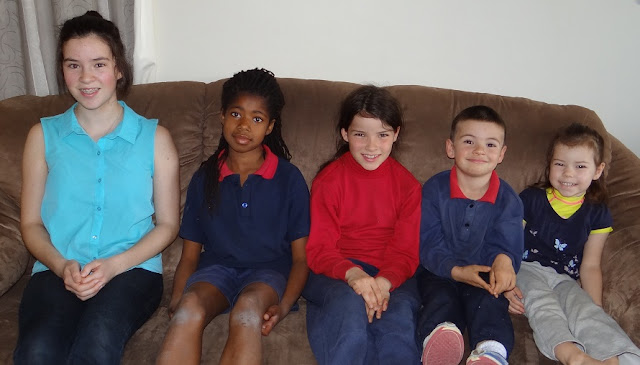 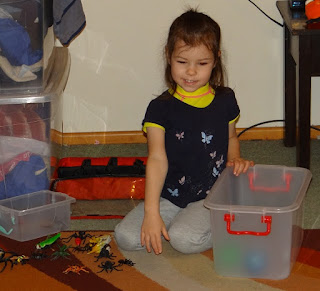 Friday 2nd September: It was too busy yesterday afternoon to take a children's photo as Ruth has started up with Jazz again (now that her ballet exam is over) and Hannah has joined in with the jazz classes too. We need to leave by 3:20, so it's a bit of a rush after school. So it was only Friday afternoon that I finally managed to get the children photo for this month. 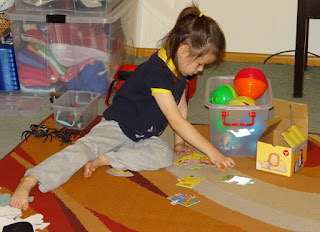 Hezekiah in school uniform today as he had a school visit again yesterday and today. With the production coming up at the end of term they are going to be rather busy with that over the next 3 weeks - so we decided to get the visits done now. He got to go to assembly on Friday at the end of day too. When we left the assembly he said "I want to go home now". Once we were in the car he said he didn't want to come back to school. We chatted through things through the afternoon and evening and eventually had him happy and excited about school next month. He was very excited to bring his book bag home with new books to read. Once we had dealt with all the social challenges he has already faced, that excitement was back.
Asher is back into her love for throwing balls. It has developed though and now she alternates with the balls and other games. She can have 3 different games going at once and diligently alternates between them all.
Eventually I got the puzzles out so that she could at least get some other specific learning happening. :-)
Posted by Buckland at 10:00 PM