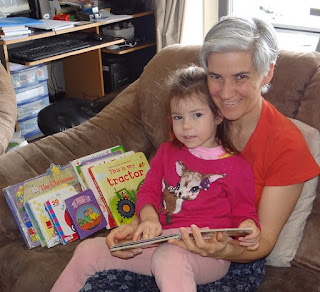 Monday 22nd: Recently I have been motivated to put an effort in to getting Asher to look at books. She would normally violently resist and so I didn't really bother. So this peaceful picture is not the full picture. This session started with me having to hold her on my lap and hold the book far enough away that she could not grab bit and throw it away. Once we were past the first 2 pages she relaxed and enjoyed it - and ended up going through 10 books (I asked Rachel to take a photo as it was such a shock to me). It's so unpleasant having to "hold her down" but it's worth it and I know I need to persevere. Once we were past those first two pages she had so much fun. 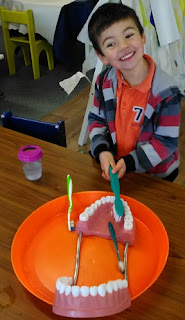 With Asher back at preschool today it gave me a bit of time to get things done. My first priority was vacuuming and mopping floors. It was only once that was done that I realised how much that being "undone" was affecting me. It was emotionally helpful for me to have those done. If I ever have a harder time again (like last week) I will try and remember to put a priority on getting the floors done. 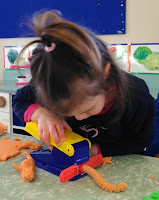 Tuesday 23rd: I took these two photos at preschool this morning. Hezekiah thought this mouth was so cool.
And Asher really dose love the dough table. She has learnt very quickly how to use the different tools and plays so nicely with the other children. It was such a blessing to know that she is learning to be aware of the children around her. One day she took two plates of of the cupboard and gave one to the other girl who was playing at the table. She is also learning the names of some of the other girls. 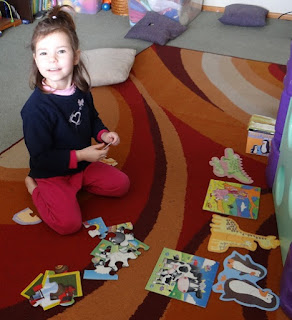 Another goal that I have in my mind for Asher is to get her onto "normal" puzzles (not just her wooden ones). This would help for when we are out and about - as the wooden ones are obviously NOT practical to use away from home. I was so impressed with her building today. A friend gave us the box with the shaped animal puzzles in ages ago - and those were the only non-wooden ones she ever did. I have now introduced the square ones (just 4 and 6 pieces) and have just put them in the same box. 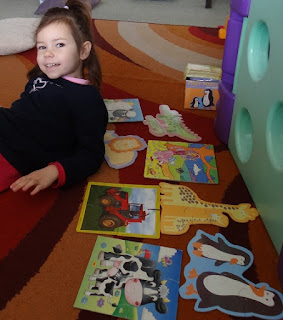 I think that helped her feel that it was more familiar.
I found some other 4 piece puzzles that I bought for Rachel when she was little and Asher has started on those too.
NOTE: Only on Sunday did I realise that I was causing a bit of a problem with having them all out as they were today. I took the box of puzzles with to church and Asher was happy to build them. The problem, was that she just wanted to push the finished one aside and build the next one. And there is no space on her high chair table for that. So when I put the puzzle back in the box, she got VERY upset with me. So there won't be any more photos like this with loads of puzzles built. I will get her into the habit of putting each one away once she has finished. Lesson learnt. :-) 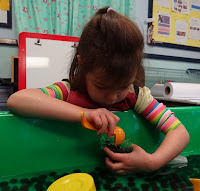 Wednesday 24th: Champion Centre today. Asher immediately started squashing these little black balls when she saw them as they are really soft and easy to squash into mush. Thankfully she was happy to take Emma's suggestion of using a spoon to scoop them into a cup. Emma even managed to get her to change scoops and cups which was great.

Enjoying the play dough as usual and working out how to use the new tools that have been introduced. 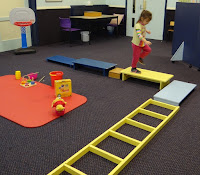 Then fun with her OT - Mariana. She had created a lovely path for her to walk over. First it was simply just walking the path. Then Mariana brought out the frogs and placed them along the path for Asher to pick up. All good. Then she placed some of the frogs just next to the path, so that Asher would have to bend down and lean over to reach them. Not so good with this one. Asher just went to each from that was "off" and put it back on. 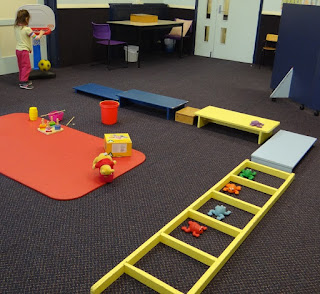 Then went to the start and walked, collecting the frogs. It's always amazing to see her accepting change, and then we get the reminder that some things are just too different for her.
She also just loves having different activities linked together. So she decided that she wanted to shoot a hoop before walking the path. And even in that the routine was that I would pick the ball up once it was through the hoop. When I came over here to take the photo, she was not happy. She threw the ball again and made it very clear that I needed to pick it up. Then the game could continue. 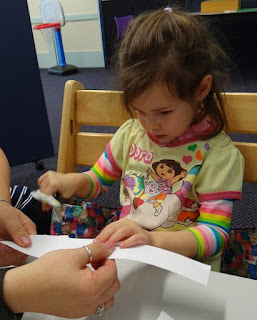 Jackie got Asher using scissors for the first time today. It was a huge fight at first but as she liked the feel of tearing strips of paper - she quickly realised that if she made a cut first - then it was easier to tear. So she got into a nice little routine of making a little snip, and then tearing. There was no way we could get her to make two snips at once, but we were thrilled with how well she did on her first go. 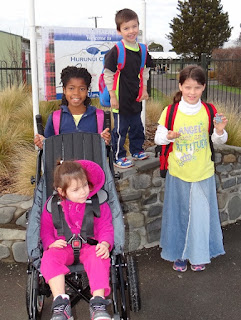 Thursday 25th: Hezekiah had his first school visit today and it happened to be on a mufti day. Yellow theme for daffodil day. This is the first picture I have taken of Asher's new buggy. It is nice and compact when folded, so fits in the car. I needed her in it today with taking Hezekiah to class and getting him settled in. Rachel works on a Thursday morning, so I couldn't leave her at home. We are hoping to get a tray for it, and then it will be a great asset for church too.
Hezekiah had a great day and was thrilled to be able to come home with a book bag and his first reading book. He was so excited about reading it to me. 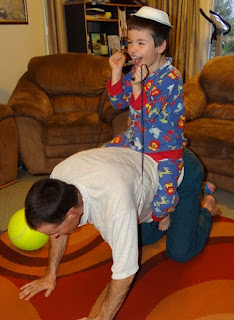 The girls had their last ballet practices this afternoon before their exams. Rachel on Sunday morning and Ruth on Tuesday afternoon next week. Such an exciting time for them.
Friday 26th: Fun with Dad this afternoon. I still have such wonderful memories of Brendon's Dad giving Rachel "horse rides" when she was little. Brendon had a wonderful example and is keeping the tradition going. :-) 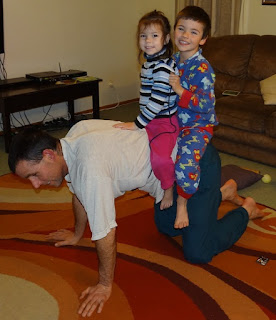 It didn't take Asher long to decide to join in on the fun. And thankfully Hezekiah was more than happy for her to join in.
This reminds me of something else that has been so special. During our evening prayer time Asher will sit on my lap. Hezekiah often sits next to me. Lately, half way through prayer time, Asher has gotten into the habit of lying down on Hezekiah. 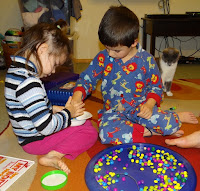 He is so patient and doesn't worry at all. The one night he even played with her hair a little as she lay there. It makes me so very thankful for all our children and their patience and understanding with Asher. She is so blessed to have such wonderfully loving siblings.
RIGHT: Hezekiah enjoying playing with Asher and her beads. Asher wasn't too interesting in threading them, but enjoyed putting them into a little bowl. 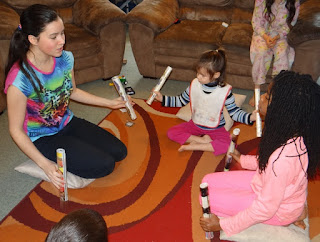 Saturday 27th: Rachel and Ruth were doing some singing and playing with their maori rakau sticks. Thankfully Hannah let Asher play with her set as she wanted to join in too. :-) 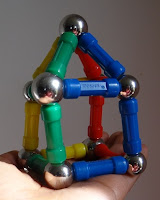 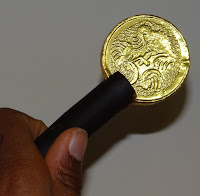 Ruth's 3D house creation with Asher's magnet sticks and balls. We have had to take the balls out of the tin lately though, as Asher has gotten into her ball throwing mood again and just wants to throw these every time she sees them.
Ruth was very excited to finally get the transfer done from the local Guide group to the correspondence group. Her weeks are just too busy to attend Guides, but she does have time on the weekends to work on badges. Today she was working on a detective badge and made this "magnifying glass". :-) 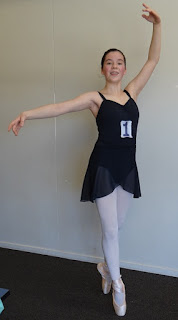 Sunday 28th: Rachel and I left at 7:30 this morning to get her to her exam on time. I think it went very well (especially from what I could see peeping through the door). We are just so very thankful that her ankle finally started recovering from the injury that kept her away from lessons through the whole of June and July. She started up again at the beginning of this month but had to do it slowly. She only got back onto point a couple of weeks before her exam, so she did really well to just pick things up where she left off. We really didn't think she would be able to sit these exams as the recovery was taking so very long. So we are very pleased. It will take a couple of weeks to get results, but I know she has done well.
We then met up with the family at church, had lunch together after church and then Brendon headed home with Hezekiah and Asher. I took the older 3 girls to a sibling afternoon at Clip n Climb organised by Parent to Parent. I will leave all those photo for their own blog post. :-)
Posted by Buckland at 1:00 PM