Thursday 16th - Asher and I

So Thursday morning ended up being a bit of a rush for Brendon. I only woke him at 7:20 - thinking that would be enough time as the conference only started at 9. He then told me that his bus left at 8am. He had set his alarm for 6am, but had forgotten to change the am / pm when he changed the time the day before. I think he also slept really deeply after taking the migraine medication earlier that morning.
So we quickly got dressed and headed down for breakfast. It was very busy as I think many others had left it a bit late too. It was a delicious breakfast though. Asher's favorites today were olives, grapes and the skin of cucumber. She took the little sticks and just ate along the one side - enjoying the nice dark skin. :-) I had bought a bottle of olives yesterday, but don't think we will need it this week as she is getting a wonderful helping at breakfast every day.
My favorites were the crispy bacon (I found some pieces that had been cooked that bit longer - just the way I like it) and salmon with Philadelphia cheese. Yum Yum. I know those will be on my plate every morning this week. :-) There are a few buffet tables with so many selections so that even avoiding any wheat you could not even try everything that was there.
Brendon then headed off at 8 and we didn't see him again until 10 that night. They went straight from their full day at the conference to dinner. The schedule showed dinner ending at 9 but Brendon just missed the first bus this time and so ended up being later. I am glad it didn't happen on his first night - as his energy levels were better already. I had the camera with me today, so Andrew (the guy who has been our contact through organizing everything) said that he would take photos and get copies to me. So at some point I will get those loaded. Brendon had a great day and many wonderful experiences (and was pleased to bring home some gifts for the children too). 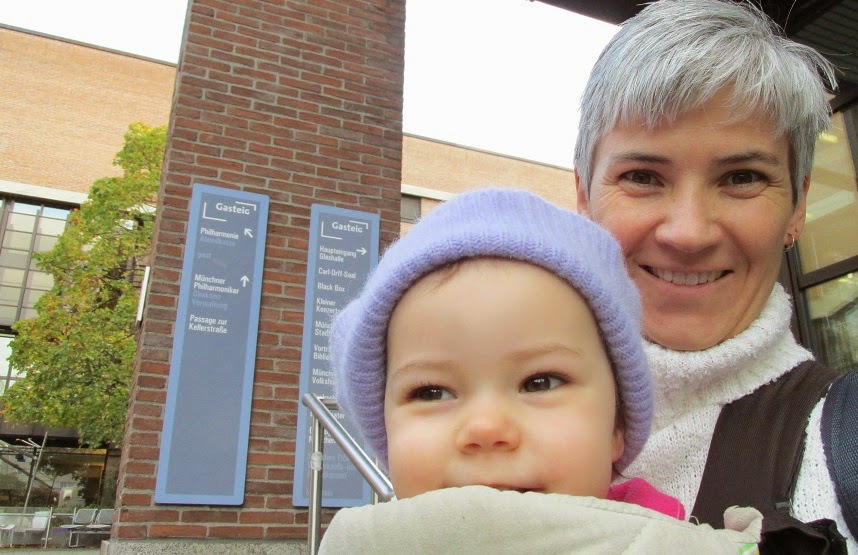 Asher and I played in the room for a while and then once the rain had stopped we headed out for a walk and to explore. I knew the library was just down the road - so at least had one clear idea of where to go.
It was quite intimidating through to look at the signs that were in German and not have any idea what it was saying. A great opportunity to take my first selfie with Asher. :-)
Thankfully the children's section was not far from were we arrived and my little bit of Afrikaans knowledge helped to at least recognize that. :-) Kinder being German and Afrikaans for child. 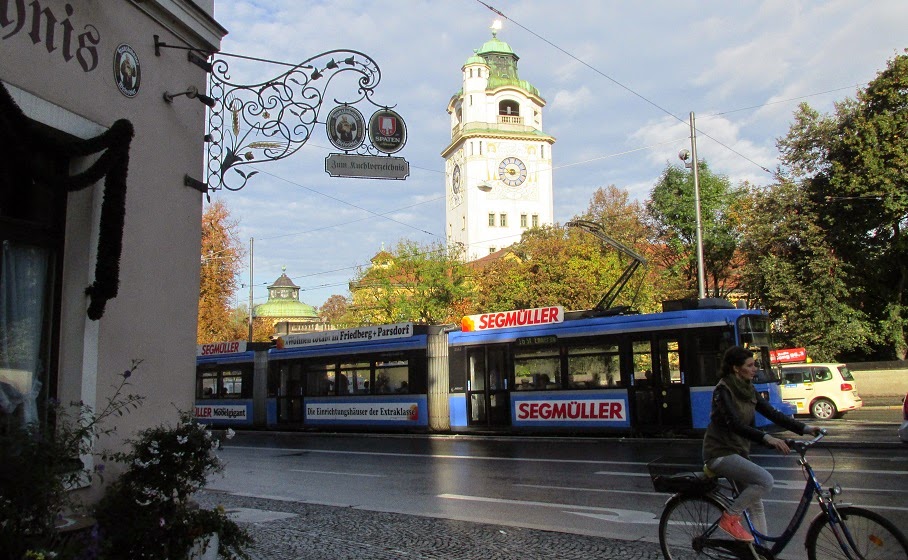 They only opened at 10 though, so we had about 20 minutes to wait. So we walked a little further and I took this photo which ended up being even better than I had expected. Not only did I get the nice old building, but also a tram and a bicycle. It also reminds me of how everything is written in German and it's quite an adjustment to be in a country were they drive on the right hand side of the road. There are a lot of bicycles around too and Brendon and I both learned today that the smaller cobbled path next to the road is not for pedestrians - but for bikes. There is actually a wider area for pedestrians. A lovely safe set up.

We also found an ATM and got some cash for buying dinner later. I took a photo as I was sure the girls would like to see a bit of the Euro money. 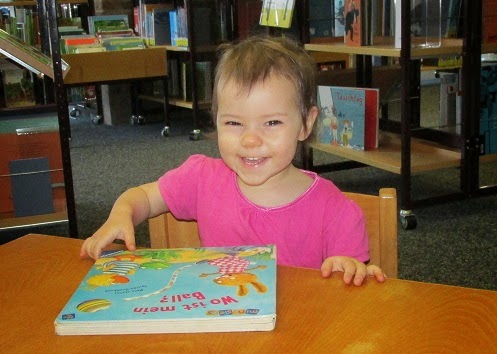 I have not worn a watch for many years now and hadn't even tried my cell phone yet (which does actually work here, to my surprise). That lovely old building had a clock on it though, so every 15 minutes I got a nice audible update on the time. :-)

So at 10 we headed to the library and Asher had fun at the little table and chair and checking everything out. There was a class of small children just finishing up an activity ans so she enjoyed saying hi to the kids too.
Just before we left she spotted this big teddy and immediately went over to give it a hug.
We then headed back to the hotel for some lunch and then Asher had a long afternoon nap. I remembered to take a photo of our room - as I know the girls would like to see it. 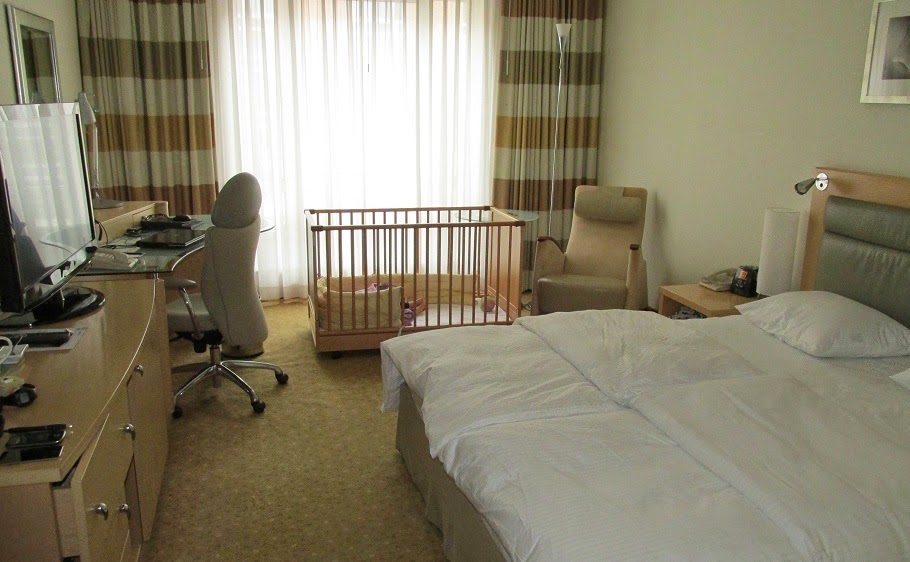 We headed out again after her nap to get some dinner. Asher is getting quite used to being in the front pouch now and is more than happy to get it all set up as she enjoys our new routine of a walk in the morning and again in the afternoon. She also pushes the buttons on the lift and helps with the card key for the room. She is thrilled that every time we go out now we get to go on an escalator when we return. It's been sweet to see these little "familarities" settling in and it makes me realize how much she likes things to happen in a predictable way.
Although she lasted longer than yesterday, she was in bed very early again as there was no way I was able to keep her up. I was feeling rather tired myself again but managed to just listen to a chapter of an audio book and then had energy to get some work done for the blog. I did all the writing for three blog posts and got all the photos sorted, shrunk, cropped and ready for when I had internet access. I had originally thought I would be able to quickly load them up when Brendon got home - but with him getting back much later than anticipated it was just a quick trip to the lobby to check for any messages. I am glad I did this because I managed to organize with Michelle for us to chat to the children the next morning.
I will put the photos of Brendon's day on a seperate post when I get them.
Posted by Buckland at 10:00 PM