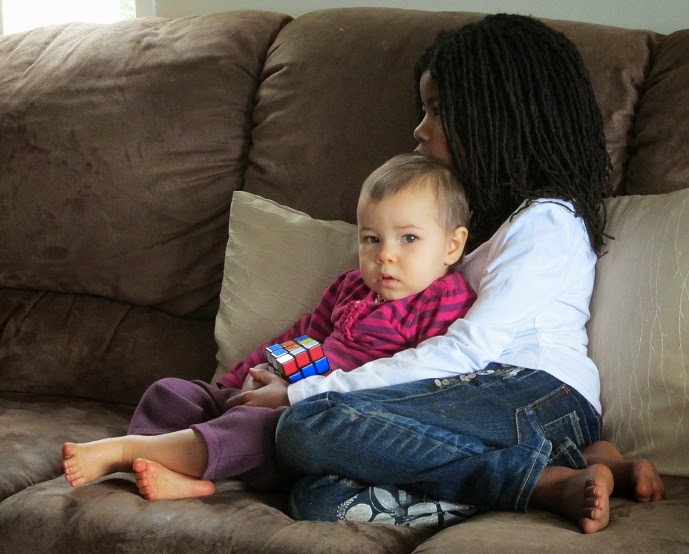 Friday 11th at 9:50pm Asher had a seizure in her sleep. I heard a noise on the monitor and assumed she just needed to go to potty as she often does between 9:30 and 10. When I got to her she was stiff. Perhaps when the seizure started she kicked the cot and we heard that noise. I was thankful that soon after getting to her and picking her up, she started breathing again. She was blue when I got there - so it gave me quite a fright.
I felt better having her in the bed next to me. At 10:30 she had a short 1 minute tonic seizure (again stiff) and stopped breathing. Thankfully it was really short and I was very thankful for the nice big breath she took when it stopped. I then gave her a dose of her "emergency" AED as they were so close together. Thankfully she had a good sleep through the night but at 7:50am on Saturday morning she had a long 7 minute Clonic Tonic (grand mal). As is our "protocol" I gave her another dose of the "emergency" AED at 5 minutes. I also then gave her some of the next medication we have at home to make sure that we put a definite stop to the seizures.
The photo with Ruth was taken later in the morning. You can see she was rather tired still. Thankfully the medication did work though and it's just one of those time that we thank the Lord for the medication that is available. We also thank Him for keeping Asher safe through them all. 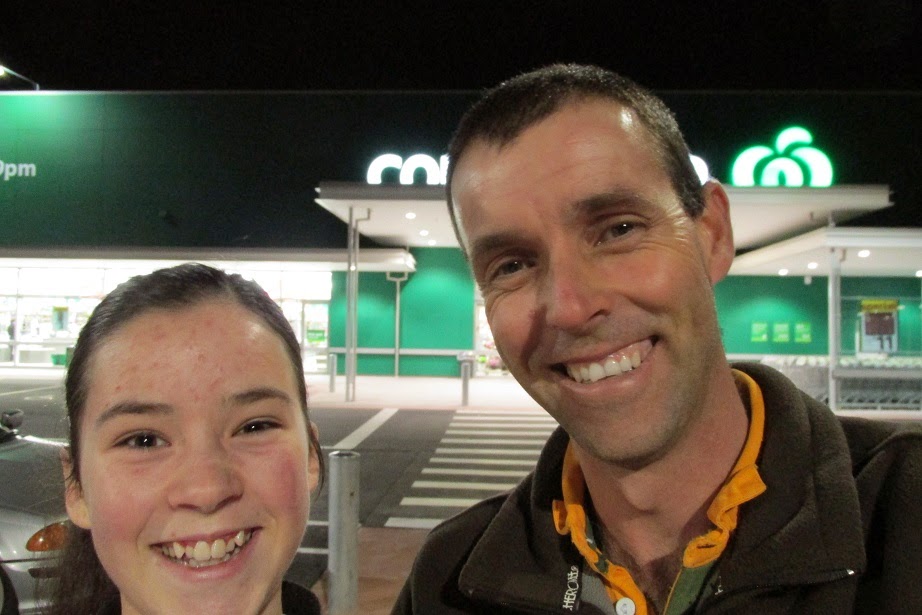 As a very strange "parent child" outing Brendon and Rachel headed down to Amberley to do the shopping on Saturday evening once the other kids were in bed. They made some fun memories taking this selfie outside the shop. They got a hook and smiles from someone driving past. :-) 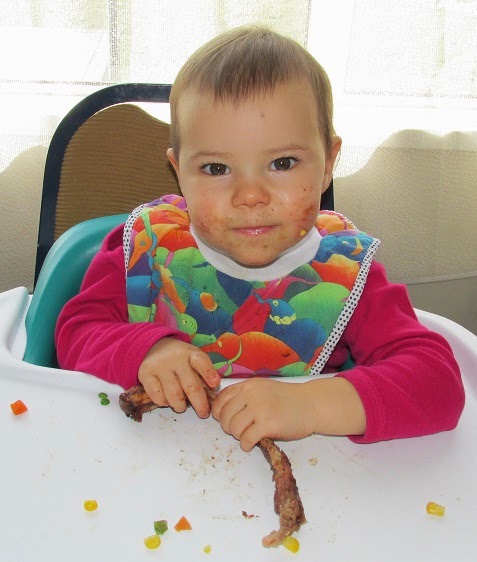 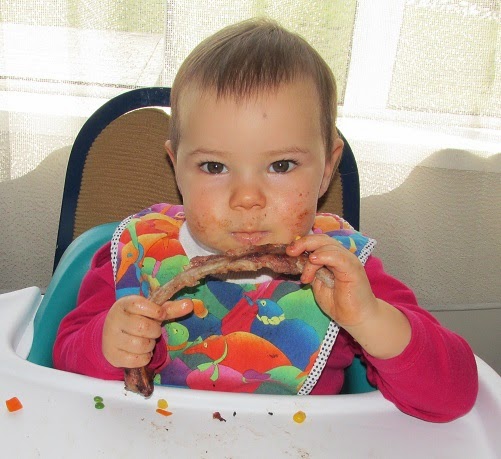 Sunday 13th - Briar joined us for lunch today and we finally got to cook up the packs of pork ribs we had gotten after getting bacon made.
Asher did really well in getting the meat off. And she does love meat. 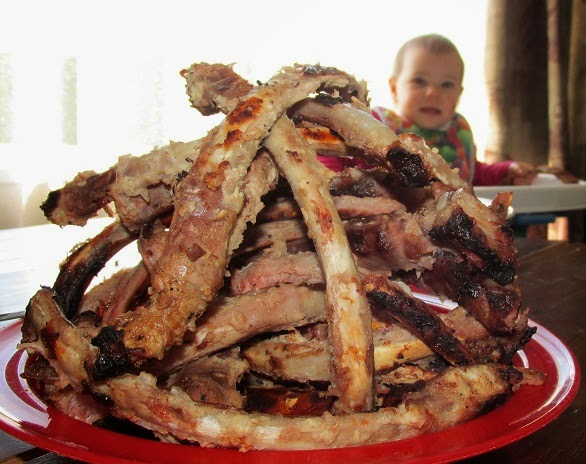 The other girls enjoyed the ribs too. Although Hannah said she didn't like the "sauce". She doesn't seem to like tomato sauce when it is cooked. She had a good laugh at Brendon and my "tower of bones". 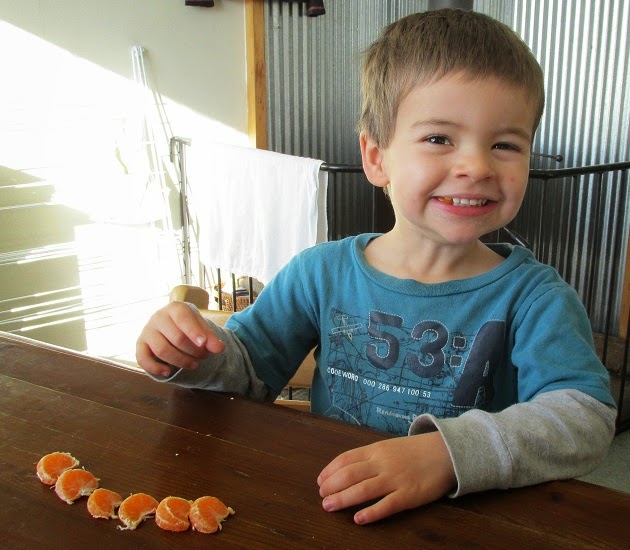 Unfortunately Brendon hurt his back really badly on Sunday morning when he returned a trailer we had borrowed. We were pretty sure he had slipped a disk. He got to the doc on Monday afternoon and got some strong anti-inflammatories. Our chiro was unfortunately away the whole week - so this was the best we could do to help him while we waited to get to town.
He didn't sleep well on Monday night and could hardly move on Tuesday morning so he stayed home.
Hezekiah has a very predictable way of eating his mandarins. He takes all the segments apart first before eating. 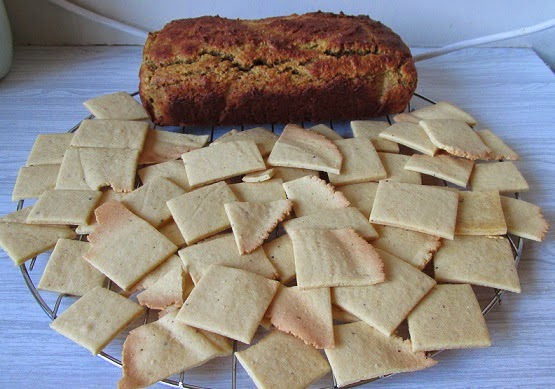 Tuesday 15th also saw me make a grain free bread for Asher and some grain free crackers for Brendon and I. We have been looking into getting her onto a gluten free diet and even better would be a grain free diet. For more info on this see Dr. David Perlmutter's book "Grain Brain". Through this year a lot of people have also mentioned the Ketogenic diet - but after reading about them all we believe this would be far too stressful. So I plan to just make changes as I can and keep things as stress free as possible. It was easy enough to get Asher off wheat because she hardly has any. She has never liked normal bread - so doing this research has just helped me to find more things to make that she does like.
On Tuesday afternoon Brendon was watching Asher playing on the deck and she had about a 4 minute Tonic Clonic and again she went very blue. She again took such a lovely big breath when it stopped but it took her a little while to pink up nicely.
She had only had a short nap previously and so she was rather tired and had a good nap. She slept in my arms and when I tried to give her to Brendon so I could hang the washing, she woke and was not happy and wanted to come back to me. So she slept a little bit more and then noticed Brendon starting to hang the washing. She decided she didn't want to miss out on that - so she wiggled off my lap and went to help hang up the washing. She always does like helping me and it was just so nice to see her back to being totally fine.
Thankfully it was only the one - so no extra medication was needed. Unfortunately I didn't sleep well on Wednesday night and I woke with a horrible spasm in my shoulder. Thursday was an incredibly difficult day for me. Added to everything else I get a phone call letting me know that one of our neighbours has put a complaint in that our dogs are "barking all the time". I know it was an exaggeration and the man said he will "monitor" things for a while himself.
I found myself at the lowest point I have ever been in my life. Thankfully the Lord helped me to learn over the next few days more about how my body has taken strain over the last few months, and different things that I can do to help get immediate improvement and then a long term solution to restoring my body and looking after myself better.
Posted by Buckland at 10:00 PM