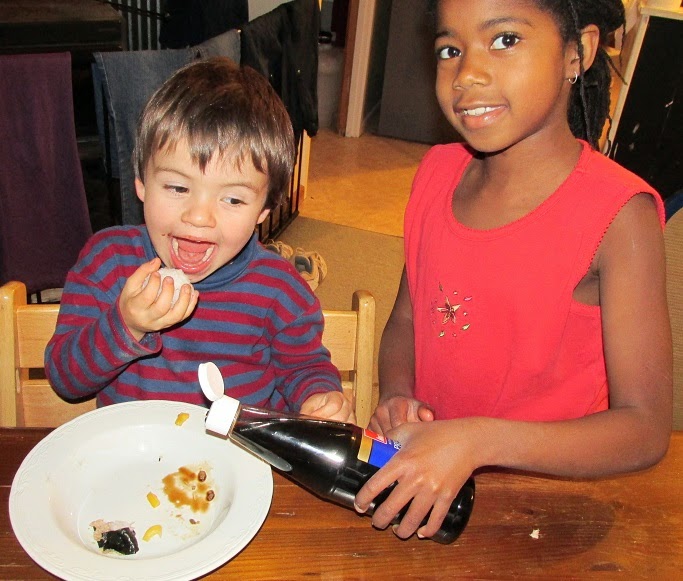 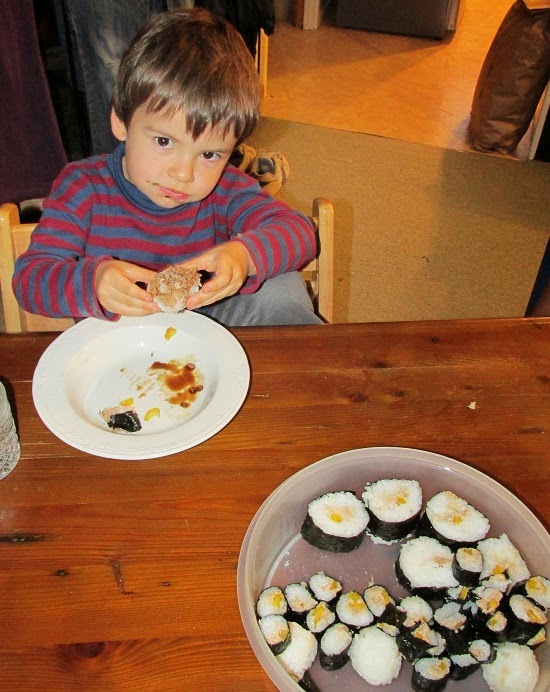 Saturday 21st - Rachel and Ruth made sushi for dinner today. Rachel had a great idea to make rice balls for Hezekiah (with tuna in the middle) as he does not like the seaweed. He decided he does like soy sauce though - so Ruth kept him supplied. :-) 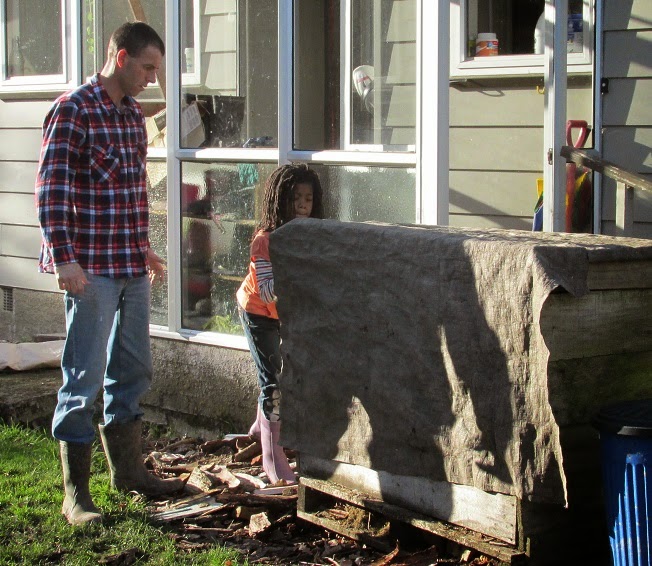 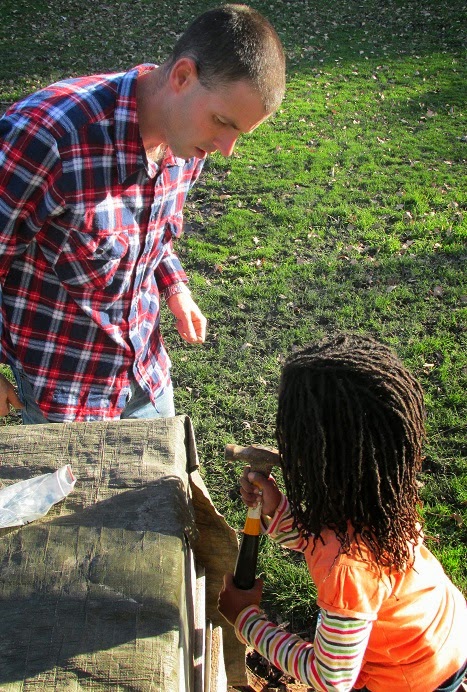 Sunday 22nd - This afternoon Brendon and Ruth waterproofed the woodbox.
Ruth always wants to try do things on her own. Once Brendon had the nail started she did a good job in hammering it in. 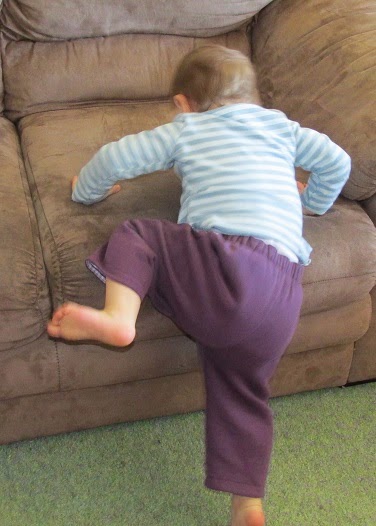 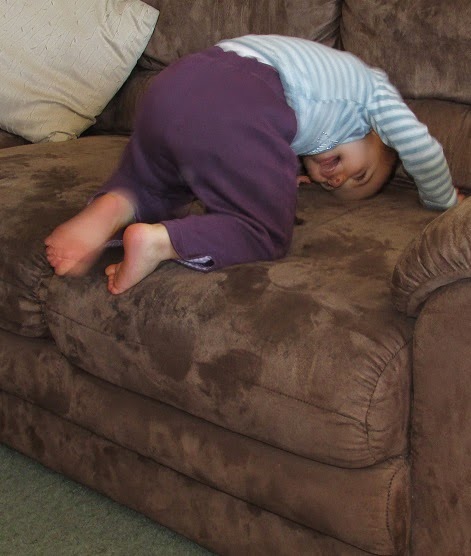 Monday 23rd. Asher is so pleased that she is now tall and strong enough to get onto the lounge furniture.
She is learning that she should not stand and she very quickly learnt how to get off.

Tuesday 24th saw Ruth start with Monarch - an on-line curriculum covering Language, Math, Bible, Science, History and Geography. I had been researching different curriculum options and after much discussion with Brendon we felt this was a good decision for her for now (and for our family). She has been wanting to be on the "same" curriculum as Rachel for a while - so she is thrilled and was so excited on Tuesday morning when it was all ready to get started on (final decision only made on Monday evening). At least now I can know that if by 11am she says she is done with all her school work - she has done enough.
Friday 27th I asked Rachel to go take a photo of Hezekiah. He spent ages outside today with his stick, his bike (named Bullseye - the horse from Toy Story) and his dogs. He doesn't care about the weather and gets out there for hours every day. 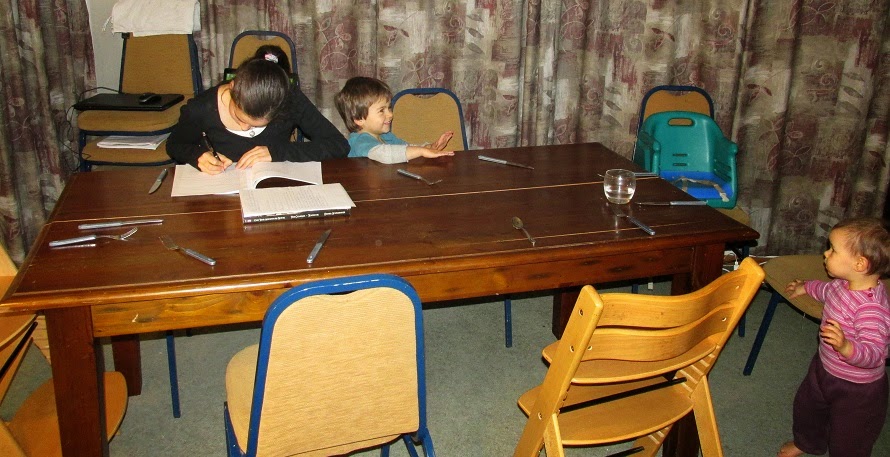 He is also always looking for opportunities to take on new jobs. He heard me ask Hannah to set the table and so he ran over and said he would do it.
Rachel is also very excited about some "school" work that she got started on Wednesday. It's a "One Year Adventure Novel" course that was ordered a number of weeks ago. (Postage from the States made her wait and got the excitement to grow.) She says it doesn't feel like "school" and it sure has motivated her to get her other work done quickly each day - as this is only done once the Monarch work is completed. 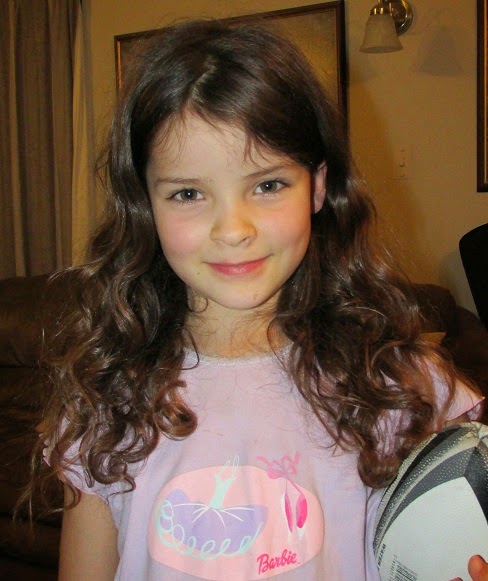 Hannah wet her hair in the bath tonight and got rewarded with all these wonderful curls. :-) 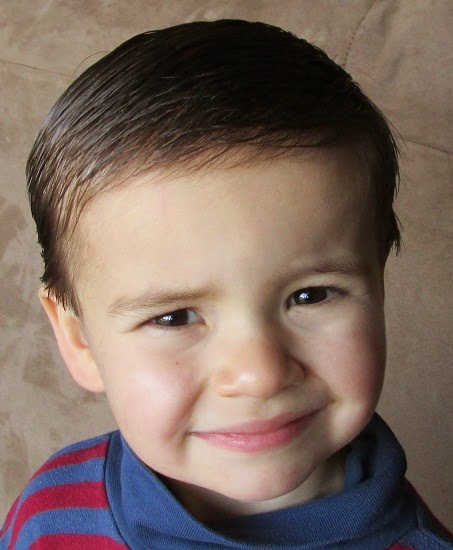 Saturday 28th: Finally I got around to cutting Hezekiah's hair. Hannah and Rachel got a trim too. 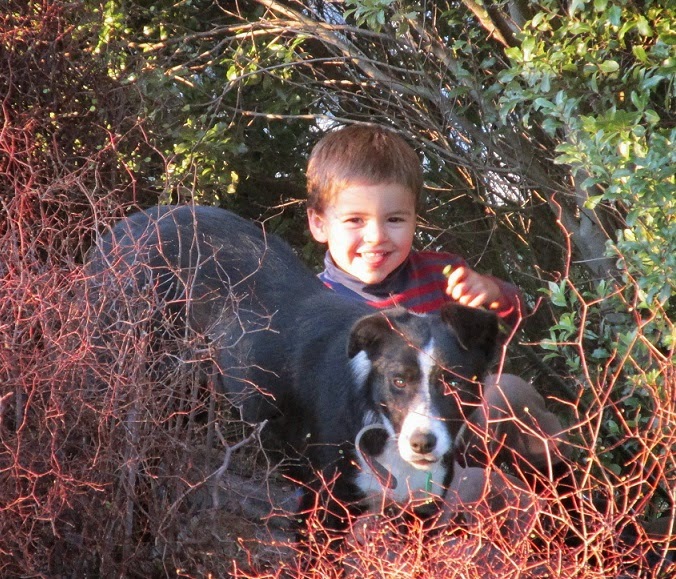 The dogs play so nicely with Hezekiah. The mountain of rocks is no longer "out of bounds" as there is just no ways you can keep this boy and his dogs off it.
Just after lunch on Saturday I went with Rachel for a walk as our "parent-child outing". I took so many photos that I will have to put them all in their own post. 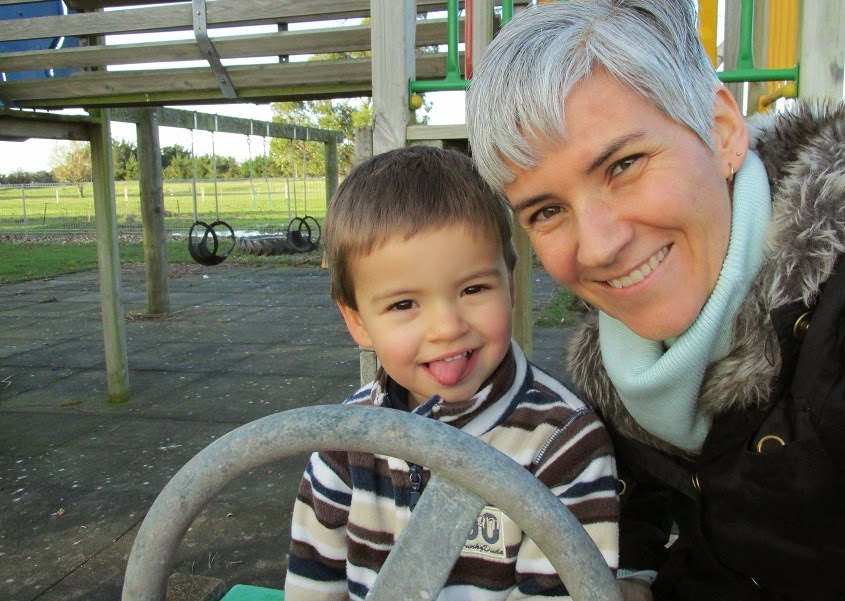 Sunday 29th - This afternoon I took Hezekiah for his "parent-child outing". As we all expected - he asked to go to the Play Centre. This was the only selfie with him looking at the camera. He took me in his car and made sure we buckled up every time. :-) 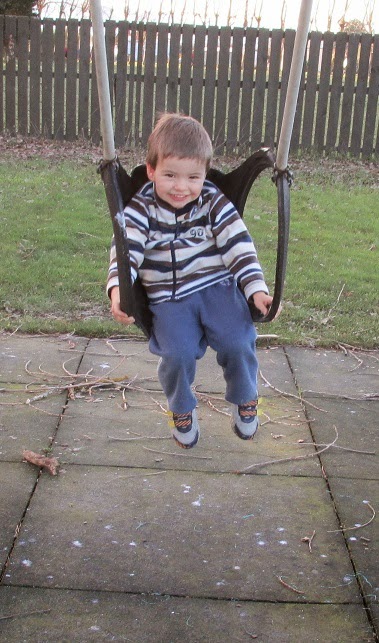 He then said he wanted to play Hide and go seek. It was lovely to have this time just with him - learning a bit more about him. He is still at the age where he doesn't quite get the game and kept copying my hiding spot. So I started finding better spots. With the first one he got a bit nervous. He was just about to call out for me when I moved a bit out so he could spot me. His face lit up. I assured him that I would not leave him - but that I was just hiding and he should just keep looking. So the next time I hid and he could not find me straight away - he didn't get stressed. He even went for a short ride on the car (buckling up and unbuckling when done) and then thought of a different area to look. 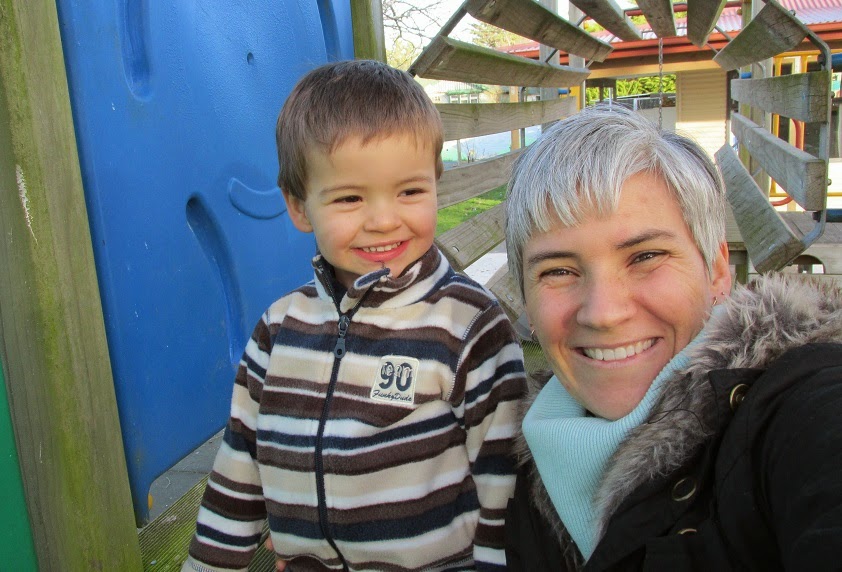 So he learnt really quickly to look harder and not worry about "being on his own" - because he now knew he wasn't on his own. He also told me about this "troll bridge" that he played with Dad last time. We had a great time together and when he saw these photos he just kept talking about going back to the play centre. :-)
On Sunday evening Asher had a very short seizure. It was a very strange one. She had gotten up and walked out the lounge - so I got up to take her to the potty. By the time I got to the room I heard the clicking noise in her mouth - the sound I have heard so often when she has a vacant seizure and is not breathing well.
She still managed to respond to Brendon by turning her head to him and she even said "hi" to me and gave me a hug - but it was clear seizure activity was happening and she went a little off colour. Thankfully it was really short and within a minute of me noticing it - it had stopped.
Thankfully she had a quiet night but on Monday at midday she had another one. She had been playing with me and I noticed that she started turning. 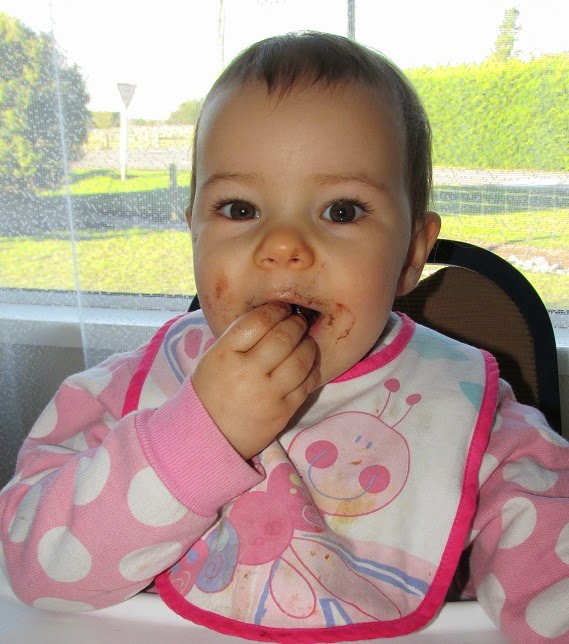 I realized she was having a seizure - with her eyes going to that side and her whole body just pulling around to that side. There was a little bit of twitching (something she has not had before - not full blown clonic tonic / grand mal). This twitching went on and off and she also had a time of not breathing well at all and going very blue. At this point I called the ambulance. It was really emotional to see it changing and not really knowing what was going on. It was good to know help would be on it's way if needed. Thankfully she pinked up quickly (the trouble breathing only lasted around 2 minutes) but it was about 8 minutes before I was sure it was totally over. The doctor phoned and we agreed that we didn't need the ambulance. The first response lady did arrive though and it was good to see that Asher's oxygen level was nice and high - so she had recovered quickly in that area.
She was postictal and sleeping soundly when I gave her the extra meds to stop a cluster. By the time I had gotten the 1ml all into her mouth - she woke up and had another 2 hours of being "drunk". This was very physically and emotionally draining for me.
I was rather emotional through the seizure and then even into the evening. I think it was a combination of it being such a different one - changing as it went - as well as the fact that it has only been 3 weeks since her last two seizures (and that I was physically exhausted).
I had already made contact with her homoeopath on Sunday evening to discuss looking at a new remedy for Asher. She had excellent success on the remedy she had last year - having 3 months seizure free. They have changed so much though - so it really is time to try something else. It helps that she is so much older now and has more of her own preferences and likes (or loves for her - she does clearly love so many specific things). So we are hopeful that this will help. 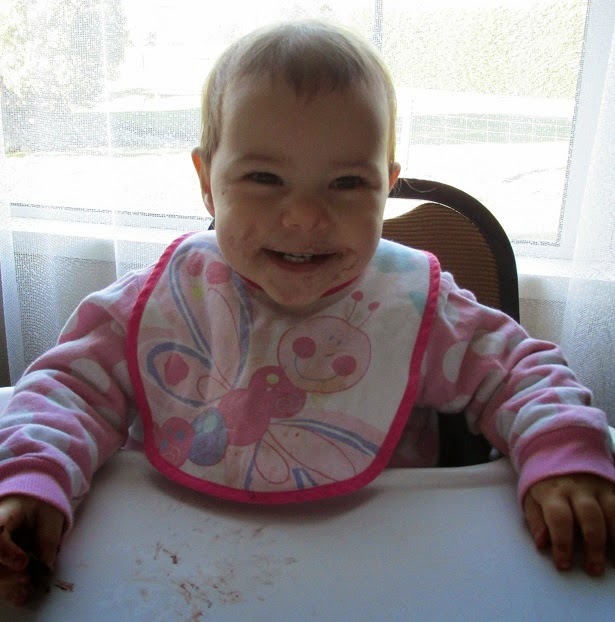 I have also had a lot of people suggesting diet changes over the last 6 months. The first 3 months of the year were just too full on (we were really just trying to cope) and then we felt that we were making such good progress (having 5 and then 7 weeks between). With this last blip I asked the homoeopath what she felt about diet. She agreed with me that the ketogenic diet was not necessary. It's when you eat only 3:1 ratio of fat to protein and carb. My biggest concern with this diet (from reading about it in January) is that children normally don't put on much weight on the diet because of the very low carb intake. I did a lot of reading on Monday and realized it is a very complicated thing to do to (to make sure you have the ration right all the time). I don't have the time to use a gram scale to measure every bit of food that Asher eats.
The homoeopath did feel that getting her onto a gluten free diet would be beneficial though - and even suggested I read up about "Grain Brain" which I now have and have started reading. So the plan for now is to get her off wheat - which is mainly a few of her breakfasts as she has never liked bread. I have also gone totally wheat free again (after slowly letting little amounts come back into my diet and then suffering because of it). Then in time I will see if I can get her off oats too. Thankfully she loves Quinoa (Ruth and her are the only children who do) - which is a lovely healthy seed carb (not a grain). And all the kids (but Rachel) enjoy their olives every day at lunch - so they are all getting love healthy fat in there too. Additionally Asher has been having Hemp oil for the last 6 months too.
So I have had to do a lot of reading and have had to work hard at not being overwhelmed by it all. It was good to eventually have a plan and just change things as we can, one step at a time.
The photos above were taken on Tuesday 1st July - Asher enjoying some "chocolate" made with coconut oil and xylitol (rather than sugar). It was lovely to see how much she enjoyed it (and it wasn't as messy as I expected it would be). It will be a nice way of her getting good amounts of that wonderful fat into her body.
Posted by Buckland at 10:00 PM