A mix of modifications 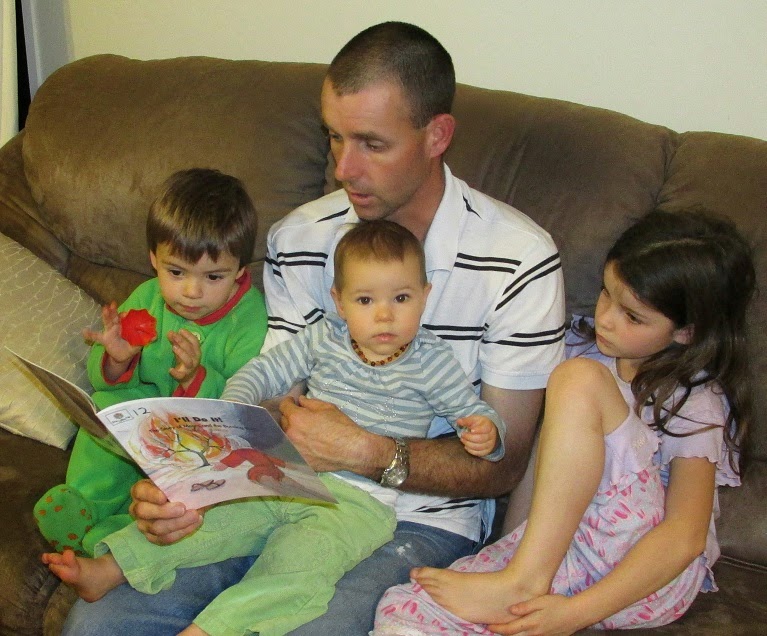 Saturday 7 June: Asher enjoying story time before bed with Hezekiah and Hannah. Just a bit distracted by the camera in this photo. 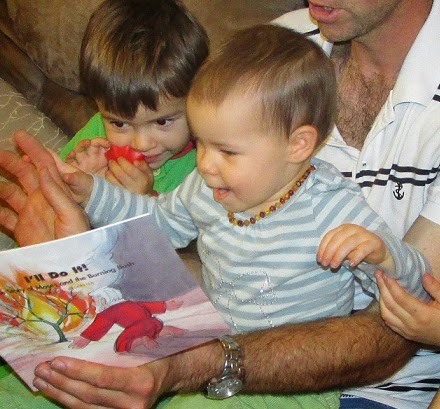 So sweet to see her enjoyment. 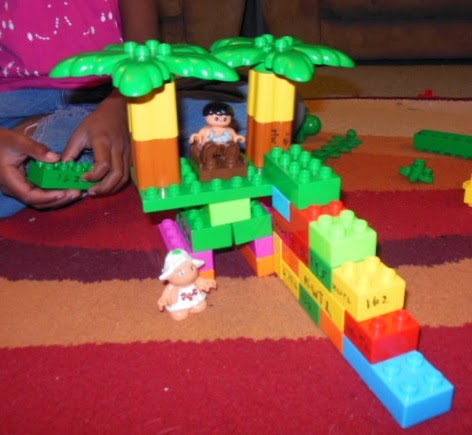 Ruth's lego creation today. She wanted a photo taken. :-)
Monday 9th June: At 6am this morning Asher had a grand mal clonic tonic seizure. It's been such a long time since she has had one of these (now 7 1/2 weeks since that big cluster).
Unfortunately she had another short vacant seizure just before 11am - and so I gave her some extra medication to stop a cluster from happening. It was very hard for me to watch her for the next 2 hours as the side effects of the drugs were that she was really "drunk" and not sleepy at all. 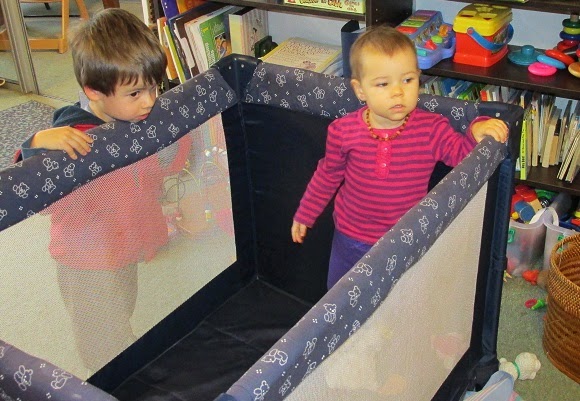 So she was really restless and falling over all the time. A friend suggested putting her in a portable cot rather than her wooden one so she wouldn't hurt herself when falling over. By this time she was at least able to stand (although her eyes were still half mast). For the first hour she kept trying to do things on her own but could not even crawl without falling over. Thankfully after having an afternoon nap she was looking so much better - just a bit wobbly on her feet. By the evening she was dancing and singing and having tickle time with Dad. We are so thankful it was just the two and we pray that she would have a really long break now before having any more. 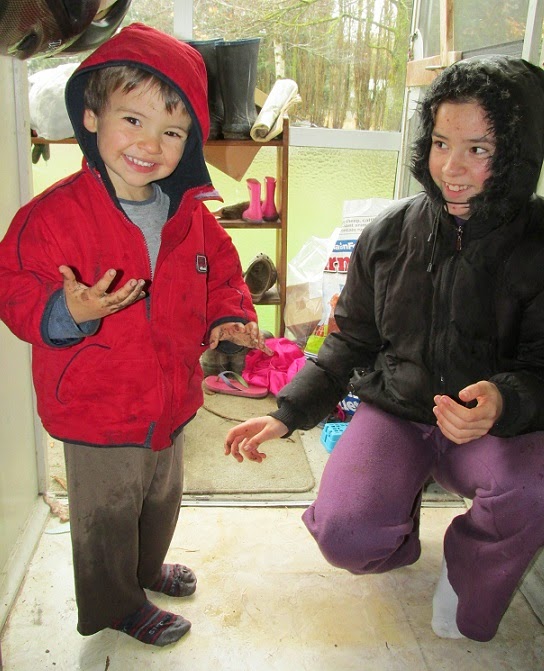 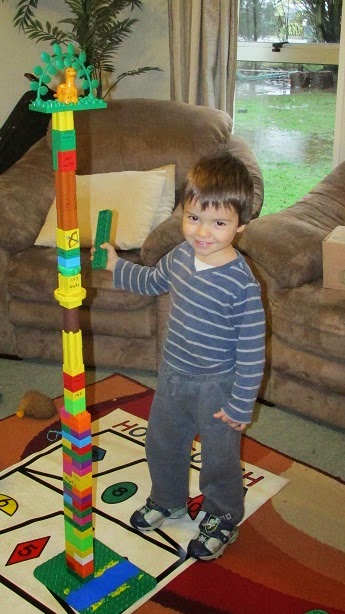 It's been so wet and muddy. Hezekiah still gets time outside - I just get a load of extra washing. ;-)
Tuesday 10th June was very wet. The garden was so flooded. We took quite a few photos of the garden - so I will put those in a separate post. 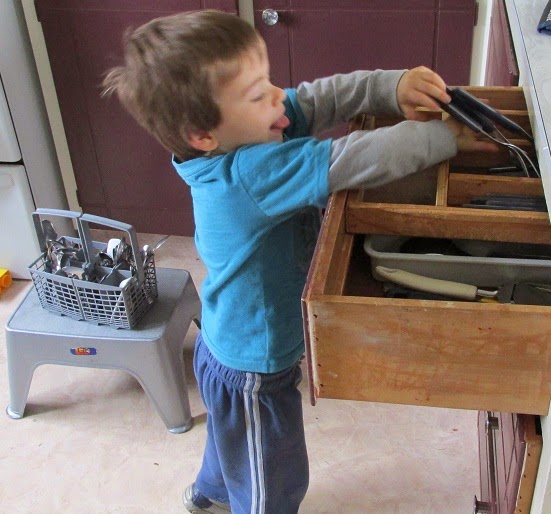 Thursday 12th June: Hezekiah is so pleased that he has been allowed to help unpack the dishwasher. :-) So Hannah has taken over doing lunch dishes (she asked to have that added to her chore list) and Hezekiah has taken over with this job from her. 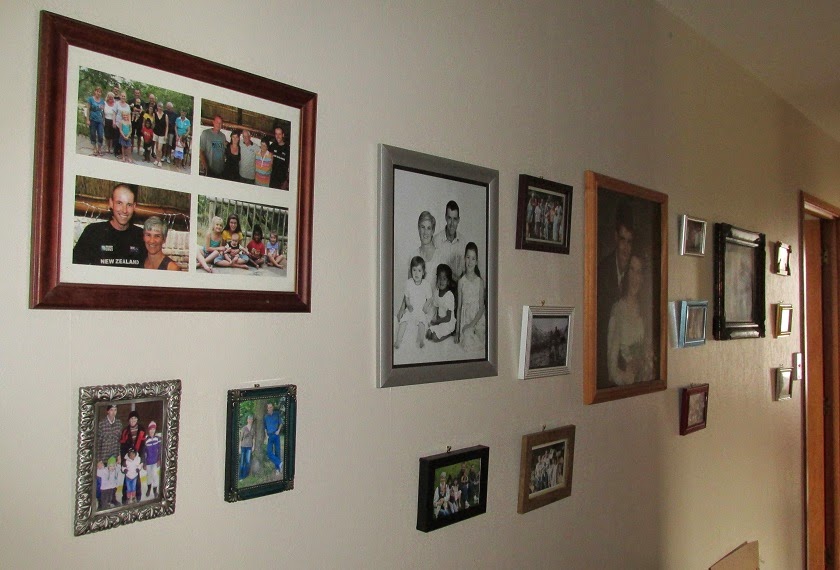 We also made a change with all our family photos. Instead of having them on our bookshelf we have put hooks on the back of them and hung them with the big family photos in the passage. 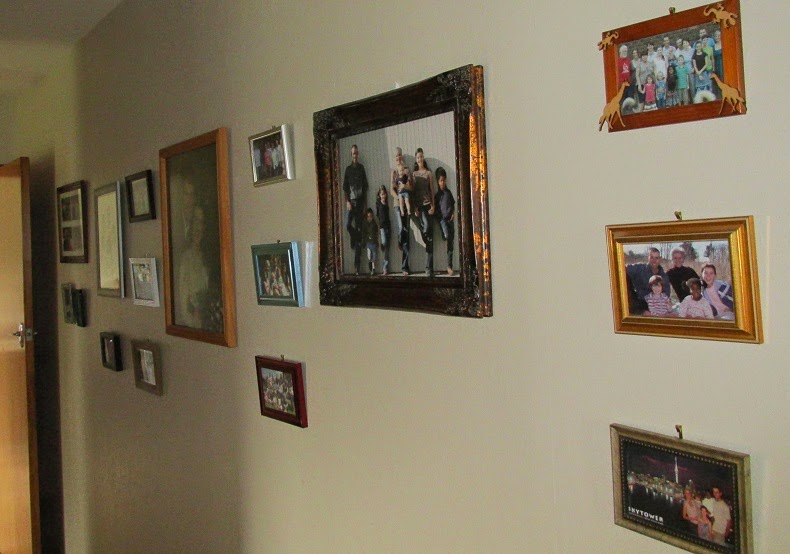 Difficult to take a photo of the passage - but it looks really nice and has gotten the children to look at the photos a lot more. It gets Hannah talking about different memories she has which is great fun. 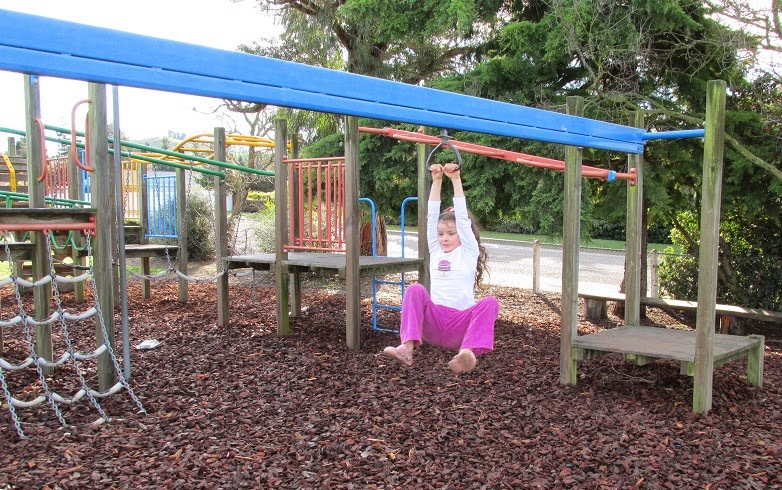 Saturday 14th June. We are making a bit of a change with our Parent-Child Outings and have asked the children to think of what they want to do.
Hannah decided she wanted to go to the parks. First stop was the school's play ground. We had a great time of chatting about different things while she played on almost every different thing. 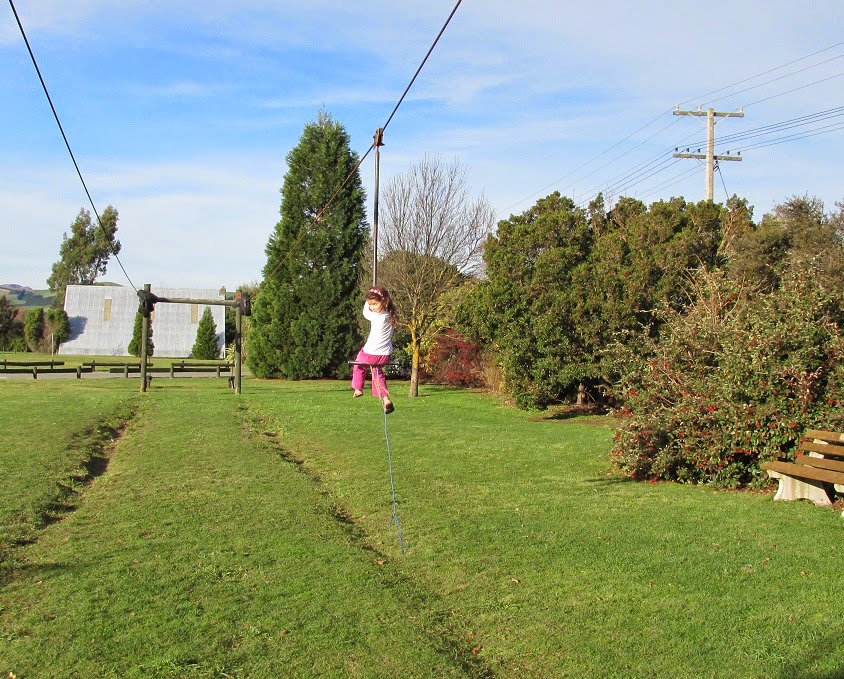 Then we headed over the road to the park with the flying fox. 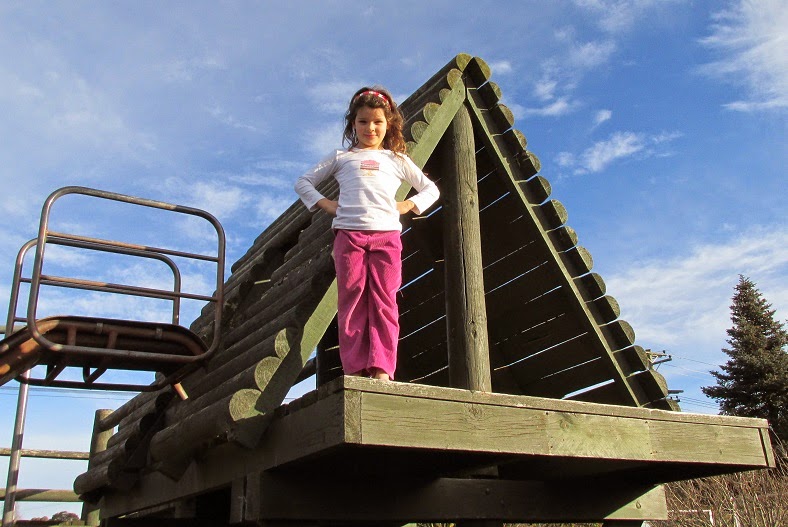 This "hut" way up high was a favourite spot to come up with some games.
And a new tradition started of taking a "selfie" while we are out. The first ones I have ever taken actually. 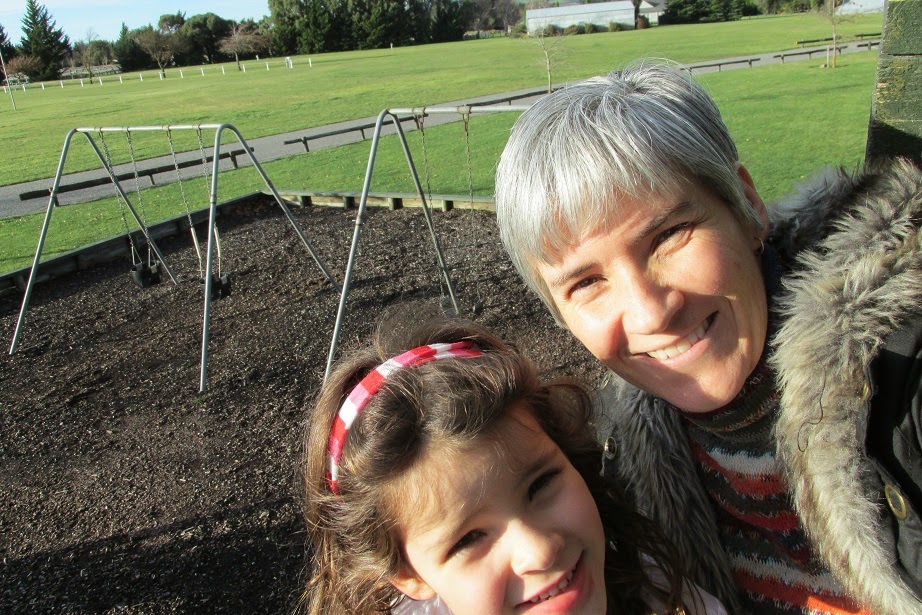 It's a bit hard using a camera for a selfie - but we tried a few. Our favourite was the one on the right - way up high in the "hut". 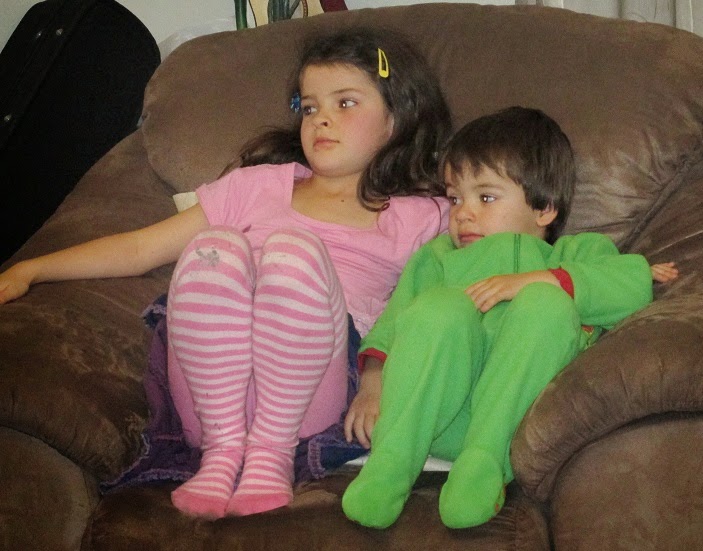 Sunday 15th - Hezekiah has decided recently that his "onesie" is the best option for bed - it is lovely and warm. So sweet to see these two sitting together watching something. It's a nice break for me from their loud and busy playing. These two just play so rough and make such a noise. They do get along so very well and are so similar in so many ways. 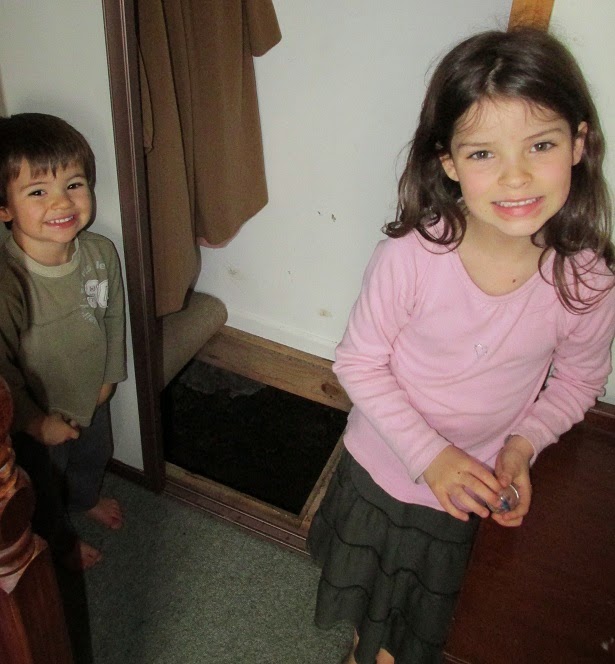 Tuesday 17th June: Today these two were tireless in asking the internet guy about exactly what he was doing and just chatting away with him. It was so funny to hear Hezekiah keep asking "what you doing boy". He was really friendly though and kept chatting away with them (which just kept them going).
They both wanted to follow him under the house. That was a definite NO WAY. Especially after all the rain last week. It was so wet and muddy under there.
The trap door is in their room (in the cupboard) so it did get me to give their room a good clean out. That was an added bonus. 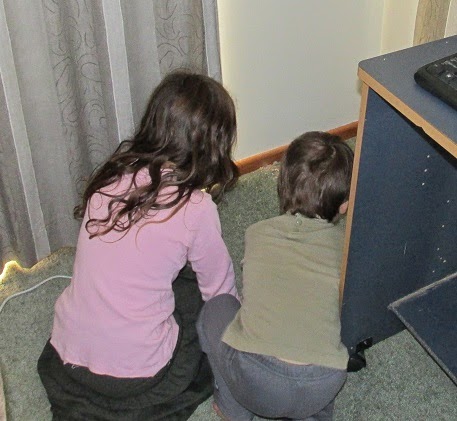 He moved the wifi router cable from our bedroom to the lounge. There were a few reasons motivating this change. 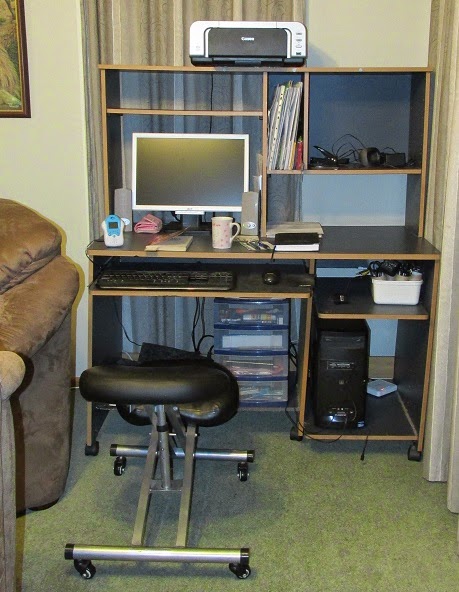 So now my computer desk is in the lounge. I was glad we tried to move the cabinet through on Monday evening as the whole thing almost fell apart. Brendon and I spent Monday evening nailing it all together.

Thursday 19th June: I finally made a batch of muesli for Brendon and I today. I adjusted this recipe and used coconut oil and xylitol instead of olive oil and honey.

I think I cut the nuts up a bit small. It will be nice to have a wheat free and sugar free muesli now. I was expecting our shop bought one to have sugar but when I checked the ingredients and saw that it had quite a bit of wheat in I realized I really did need to get back to making our own. 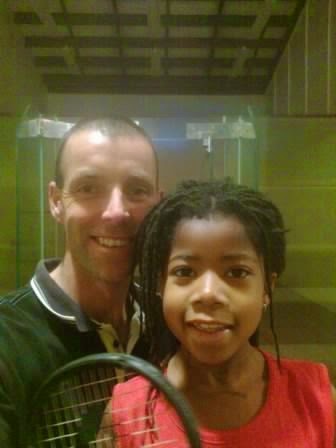 I have realized lately that I really do need to go back to being more strict about not including wheat in my diet. I was doing so well last year when I had cut it out completely and recently had let little bits come in more and more and was feeling the consequences of it more and more.
Saturday 21st June: Today's parent-child outing was Brendon and Ruth heading off to the squash courts. They don't get to actually "play" together but Brendon is helping her to learn by hitting a big bouncy ball with an old racquet of ours. We will probably have to look at getting her a smaller racquet for herself though if she does want to keep on with it.
Posted by Buckland at 4:00 PM