Tumble, tooth and tuck in

Saturday 12th: It was Hannah's turn to go to the tea rooms with Brendon this weekend. She is so excited for the whole week before it is her turn. So on Saturday morning she was asking when they would go. Brendon said that they could go in the morning if Hezekiah could come with - otherwise it would be in the afternoon when he was in bed. She decided he could come with.
Again he was just pleased to have a biscuit and a flake off the Ice-cream Sunday. He was not even interested in trying the ice cream. 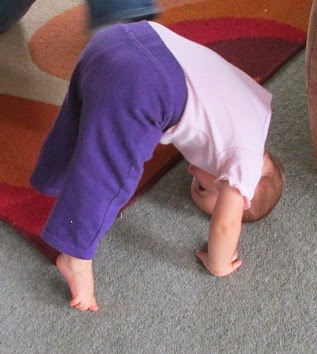 After lunch we were playing in the lounge with Asher and she decided it was time to practice her "rolly pollys". (What is the proper word for them?) Lately she has loved getting up onto her toes like this and looking back through her legs. 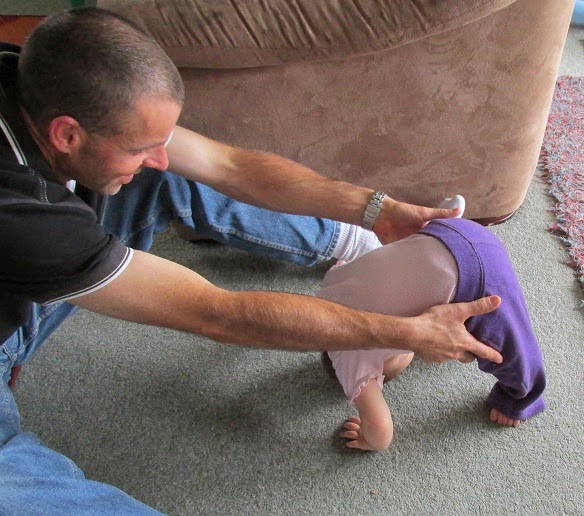 Today she decided it was loads of fun to roll over too. Brendon just there to make sure she doesn't hurt her neck at all. 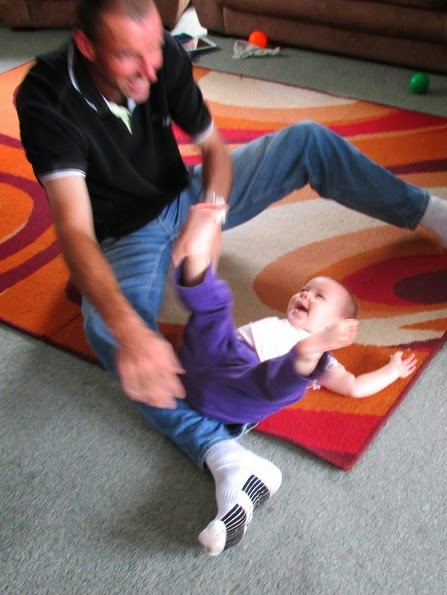 She had so much fun and had us all laughing with her. 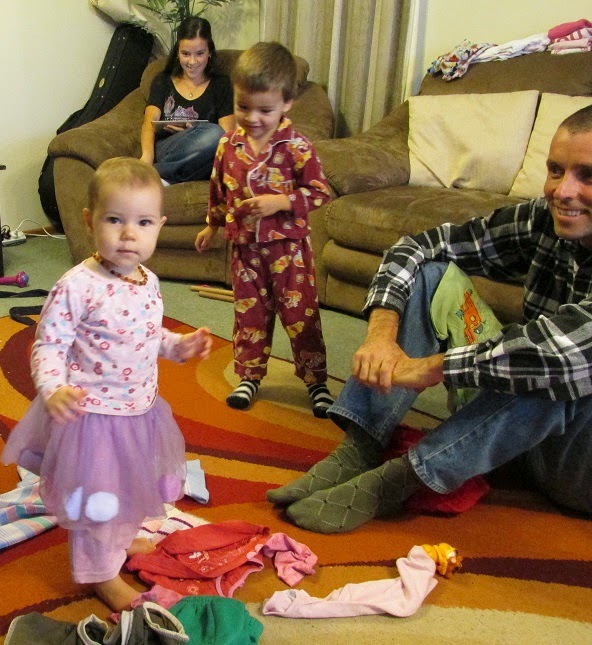 Sunday 13th. We had been given some clothes and to give Asher something to do in the afternoon I allowed her to unpack the bags for me. We then sorted them out and things got "tried on". She looked so cute in this little skirt. Other than for the odd photo I have realized that I don't put my baby girls in dresses or skirts much. :-) 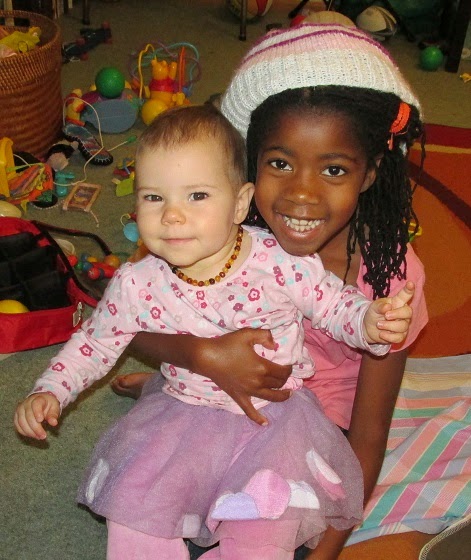 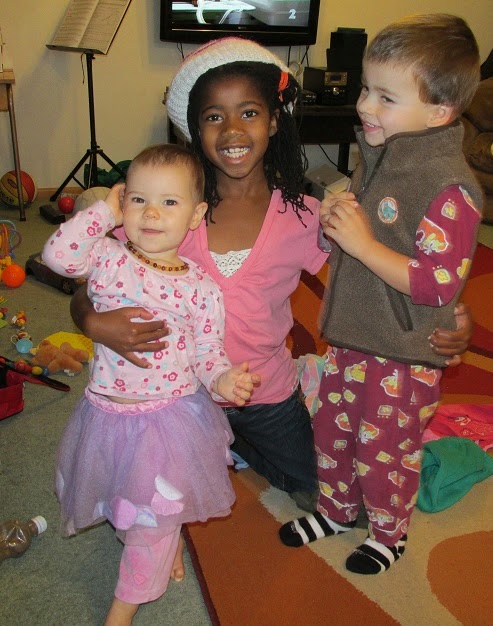 Hezekiah wanted to be in on the photos too. Trying out the pjs (top a little too small unfortunately) and jacket. 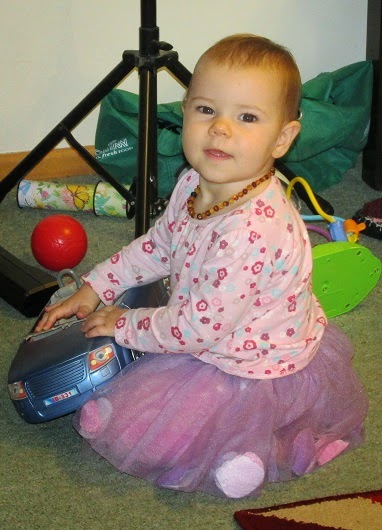 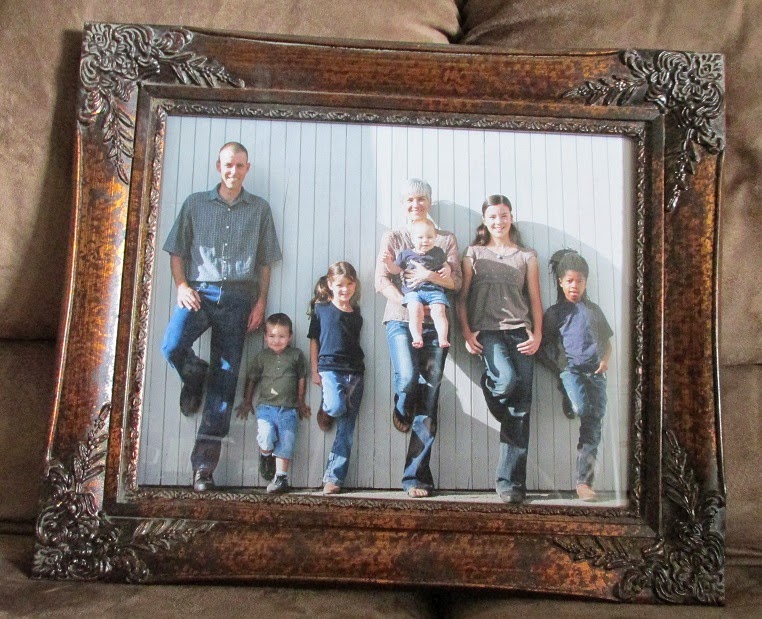 Monday 14th: I was so excited today to get 2 courier deliveries. One the large family photo print I ordered on-line and the other the frame for it. We finally have a new family photo to put on the wall (the previous one has Hannah as a baby - so after 5 years it was about time). I also got 50 free prints and so I got loads of birthday photos printed out for a small album Rachel has. The children have often wanted to quickly look back at previous cakes and now they can. :-) 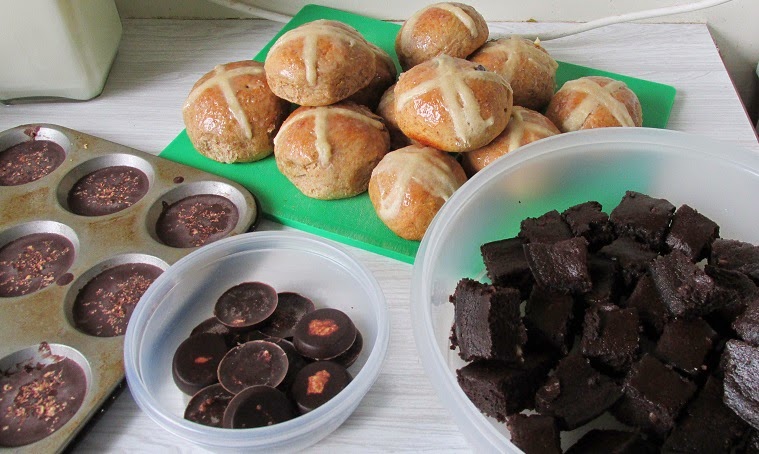 Tuesday 15th was a baking day. Rachel made hot cross buns and we attempted caramel chocolates (they weren't that great). I also made a batch of "Legal Brownies" (which have no flour and no sugar). They were delicious. I was glad I had something to nibble while the others enjoyed the hot cross buns (my stomach doesn't enjoy wheat all that much). 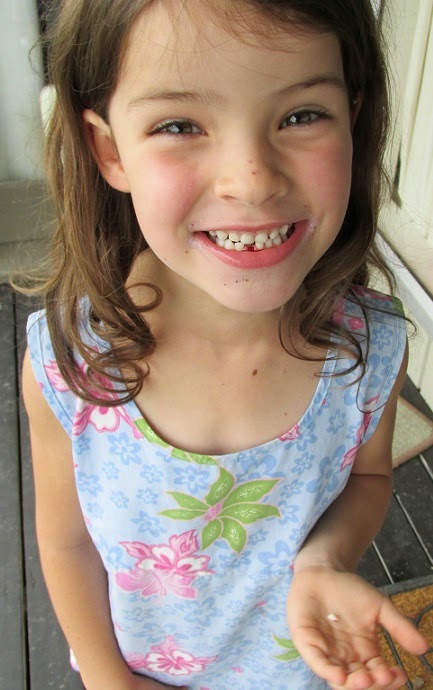 This afternoon Hannah finally lost her first baby tooth. It had been wiggly for a while and she kept biting on it and it hurt. So today she just decided she was going to pull it out. Well done Hannah. What a big girl you are becoming. 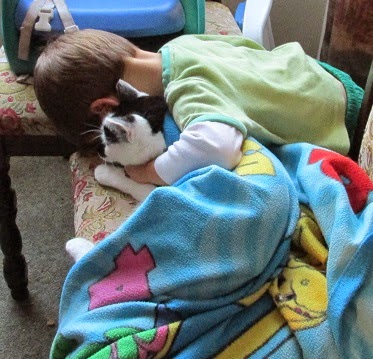 Wednesday 16th: Hezekiah really enjoys Patches and with the colder weather has wanted to "keep her warm". She does spend a lot more time near the fire place on the colder days and today Hezekiah decided she needed a blanket too. 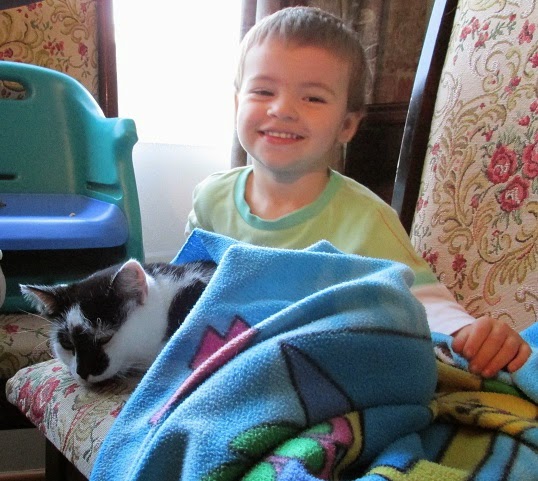 Such a sweet boy. He gets very excited when Patches decides to sleep on his bed. :-)

Thursday 17th: Rachel made another batch of hot cross buns today and they looked even better than her first batch. Well done Rachel. She also helped me make a batch of "Chocolate Brownie buns" which again have no wheat (almond meal / flour being the "flour" used). We enjoyed these after bible study and it was nice to put some butter on one and feel like I was getting a hot cross bun treat too. :-)
Posted by Buckland at 5:00 PM