From my heart: 5 weeks and a dozen in a day 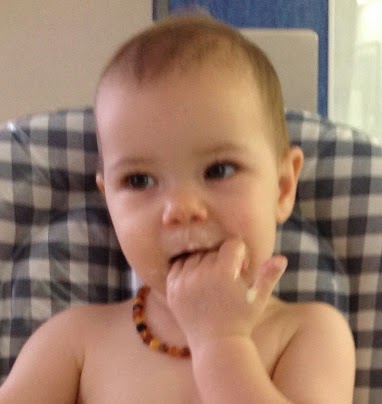 So by 10am she had a dose of Midaz and I was thrilled to see her up and she even had a lovely time of eating the pasta bake for lunch. I had her shirt off as she had developed a slight temperature through the morning (I can feel by touch and the nurses confirmed it was around 38). So although not a major concern - it was an indication that perhaps the trigger to this cluster was her body fighting off a small viral infection. Ruth has had a bit of a runny nose and what can often happen with epileptics is that when something else weakens their body - seizures just happen more easily.
No. 9. When it got to 1:30 I was starting to think about us perhaps being home for dinner. 4 hours seizure free felt wonderful. This morning I had unwisely not packed for overnight and not even put a short sleeved shirt in for Asher. So when she had another vacant 1 1/2 minute seizure at 1:50pm it really knocked me. I knew however that we would have to stay overnight and it all just felt a bit much. This also being the worst day she has ever day (the previous being 8 seizures on 5th Jan). Thankfully God blessed me with a lovely friend who even though too many hours away physically to visit - was still able via text messages to be a shoulder for me to cry on.
It was good to just acknowledge how hard the day had been. I really did just need to cry about it all. The one nurse came in to let me know they would be moving us to PHDU (Paediatric High Dependency Unit) for the Phentoyin drip (a very strong AED that would hopefully be enough to stop the cluster). She was very kind and understanding and it was a real blessing to have someone just take time out to sit with me and give what comfort she could.
No. 10. At 2:45 she had a 1 1/2 minute vacant seizure and she went very blue. It is really horrible to see her go so blue - even her ears went blue. I was so thankful that we were in hospital and the nurses were so quick and ready to help. As soon as the nurse got the oxygen in front of Asher I instantly saw her ear turn pink. What a blessing to have that physical support for her through the seizures as there is absolutely nothing else we can do.
We got her line in for the drip (bringing an oxygen bottle with us into the treatment room - just in case) and waited to hear that PHDU was ready for us. 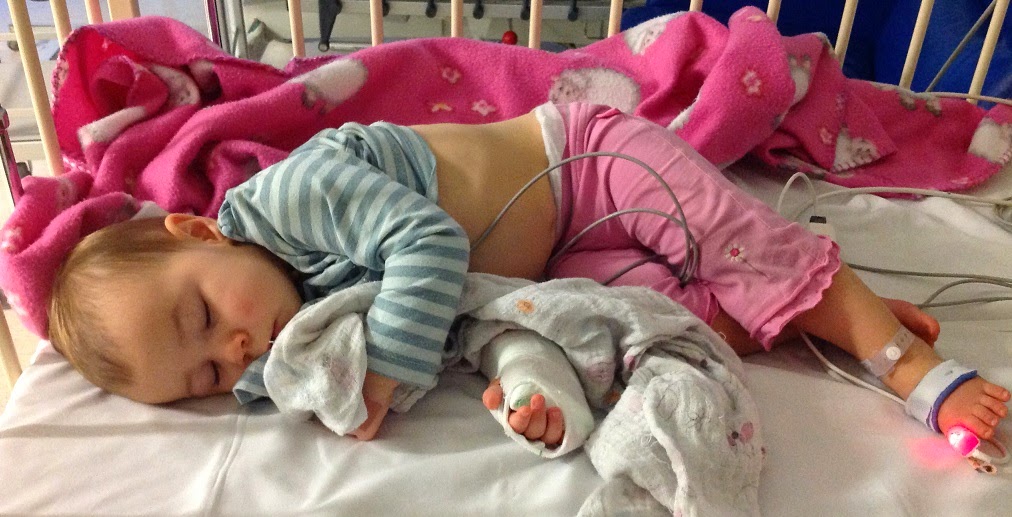 We got down to PHDU and got Asher all attached. She needed to be on proper heart and breathing monitors for while the drip was going (3 extra monitors on her chest and tummy as well as the one on her toe).
Thankfully I was feeling much better by now. Brendon had wonderfully managed to pack a bag for me with all the things I didn't bring with for an overnight stay and a friend of his who was heading into town dropped it off for us. 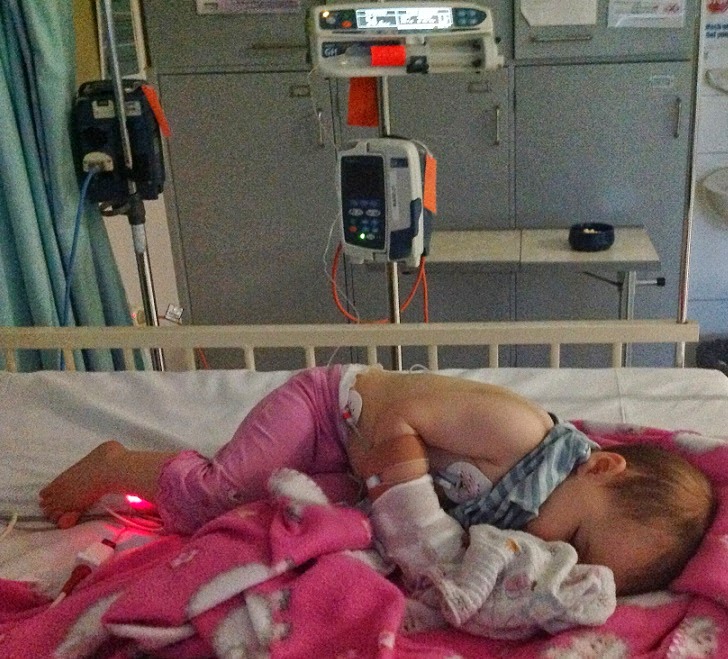 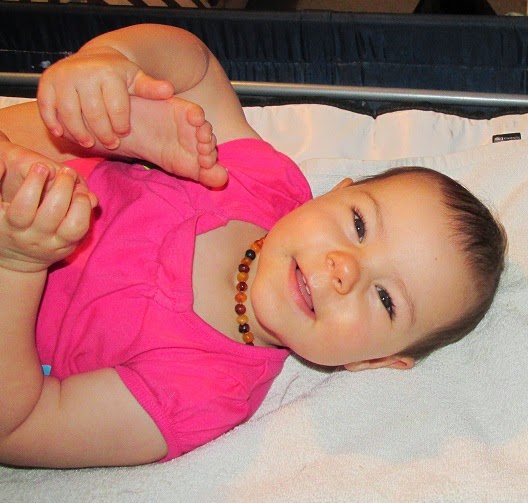 We praise and thank God for the times of smiling and laughing and enjoying things as she did a week ago. This photo was taken on Sunday afternoon and she had been laughing at Dad tickling her. Just two days afterwards. I can't describe the wonderful joy this brings to my heart.
As I write this on Wednesday evening I also praise and thank God that she has gone for 5 days now with no seizures and no extra medication. A double blessing.
A friend wrote today saying that my strength was incredible. This was my reply:
It's the Lord that is incredible. I know very clearly that it is only His grace and care that has gotten me through this all. It was the worst day she has had on Friday with 12 seizures eventually. On Friday afternoon I just spent a good time crying. It was good to just acknowledge how terrible it was to go through. It is a really horrible thing to watch, especially when it's your little baby. God faithfully comforted me in that time though and it wasn't long before I could smile again and see His many blessings and be comforted by His care and love. He has taught me to trust Him fully and to really rest in Him. It would be too much to bear otherwise.
All praise and glory to God who is my daily strength and comfort.
Posted by Buckland at 5:45 PM

Labels: Asher's epilepsy, From my heart