EEG and fun and games 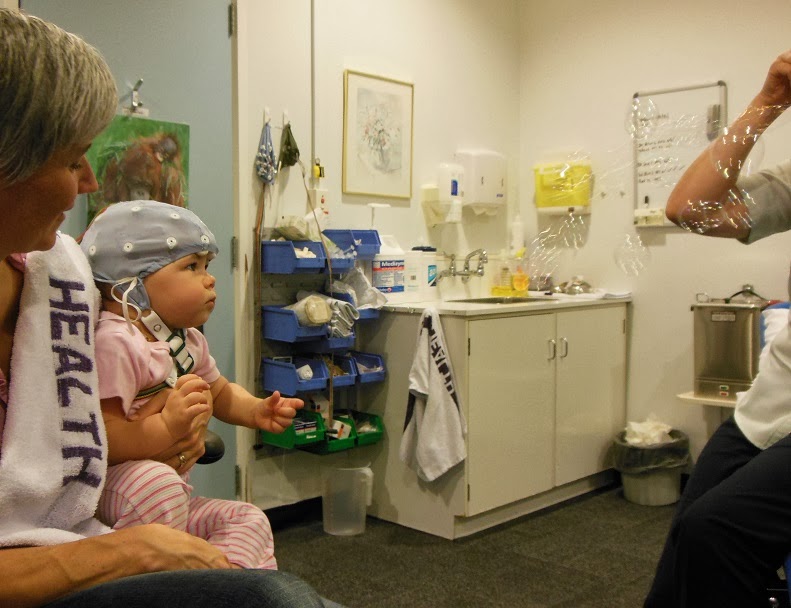 Monday 10th saw Asher, Rachel and I heading into town for Asher's EEG. The other 3 had a visit at Sarah's home and had such a great time.
When the cap gets put on it upsets the child as they have to scratch the scalp a bit with some rough gel so that the connections are all good. Then you ideally want the child calm so you can get a good idea of what "normal" brain activity is. Rachel helped to try and distract Asher with the variety of toys they had when the cap was getting put on and the bubbles were a great help too. The dear lady sat blowing bubbles for almost the whole test. I think I would have had a headache from all that blowing.
The results from this EEG will help the doctors to determine what AED (Anti-Epileptic Drugs) would be a good second choice. We know that the first choice has just NOT worked for her. 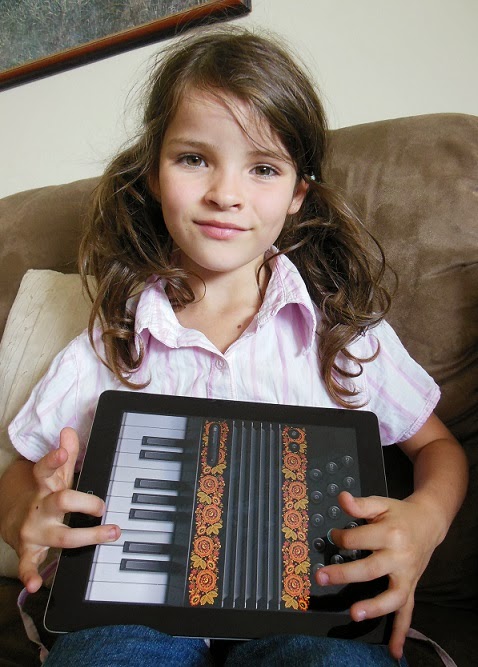 In some ways it was a blessing that she had a couple of her "twitches" while the EEG was being done. Her eyes dart (this time it was down) and her head goes with. Quick and often repetitive motions. She did it twice in a row and I pointed it out to the technician and then she did another. So at least they can see exactly what is happened with those. She did not have any of her big jerks during the test. Those are so unpleasant for me when I am holding her. So the less of those we can have the better. It get's my heart pumping every time. And more so when there are two right next to each other. It's a natural reaction to check that she is not having a seizure.
Tuesday 11th. Hannah enjoying on of the many free iPad applications I have downloaded over the months. This time having a go at playing the accordion. She is growing up so quickly. 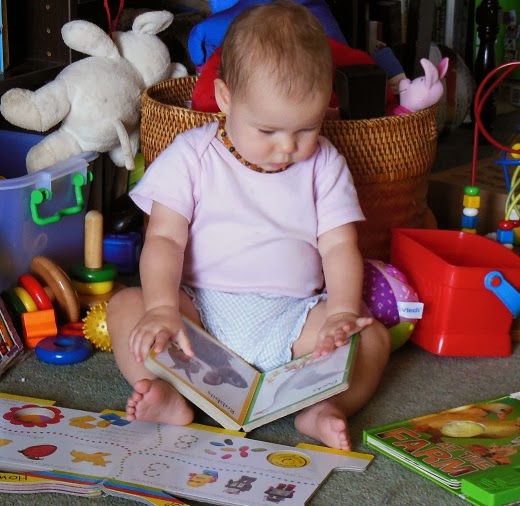 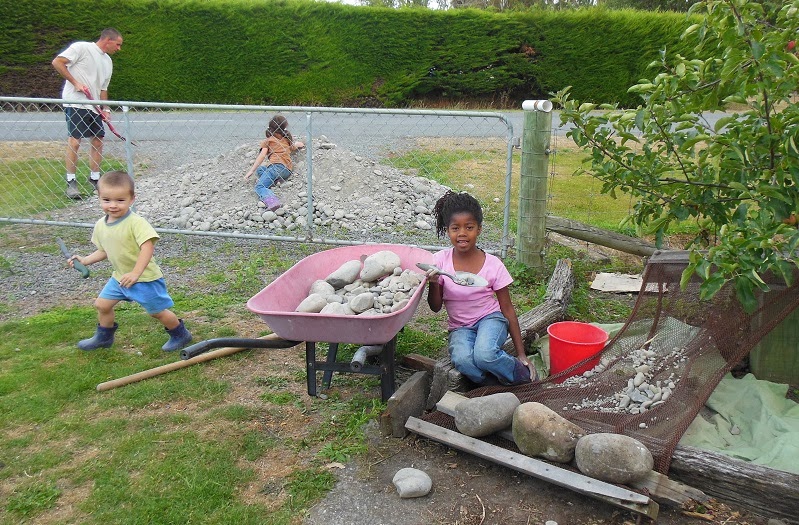 It was great to get a bit more work done in the garden after dinner. This old sieve worked nicely in getting the rocks and separated quickly. The only problem was that we forgot that it was Wednesday and had forgotten to have our Skype chat with Nana. Thankfully Ruth remembered at bed time and so Brendon and I got to chat to her a bit and just give her the reassurance that we were all ok.
Below are some of the photos I took at dinner - trying to get Asher's "piggy" face on camera. She makes me laugh so much with that one. 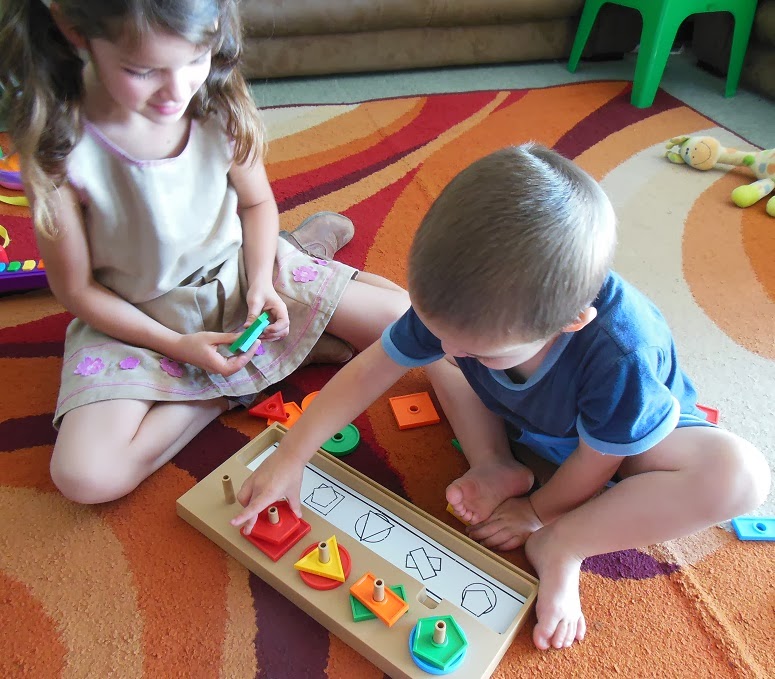 Thu 13th. Hezekiah  has played with this game often but I have never asked him to actually do any of the tasks. So today I asked him if he would copy the shapes on the pictures. I was impressed with how easily he did it. Seeing which shape was underneath and which one on top. He is already quite good with his colours and is doing really well in learning shapes too. It's always so much fun to watch how quickly children can learn things, just by playing. 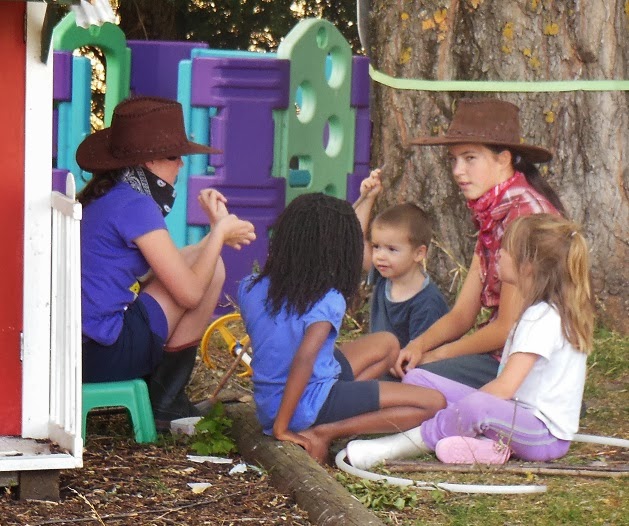 It's also so much fun to watch their imagination giving them so enjoyment. Briar and Brooke joining in with the fun this afternoon.
Below: Brooke gets to watch the play that the others have been working on. Rachel says that Hannah is a really good actress. This play has "The Milkybar Kid" adverts as it's inspiration. Anything with cowboys or cowgirls has been a favourite lately. And Hannah is thrilled because she got a pair of cowboy boots from Sarah on Tuesday. 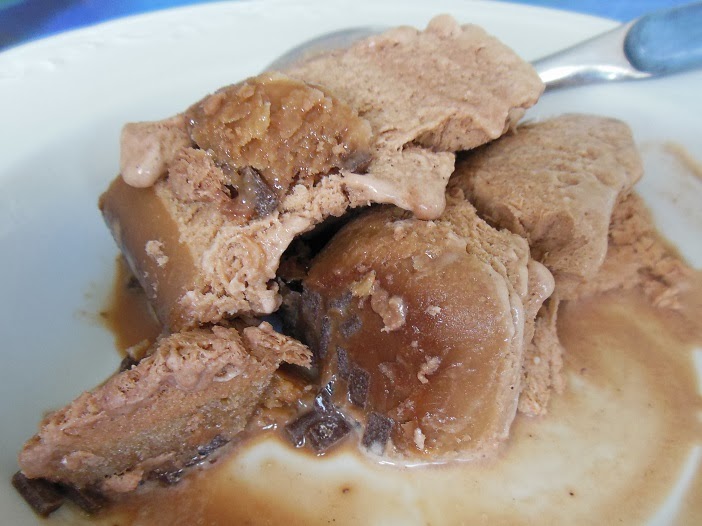 I had made chocolate caramel ice cream on Wednesday evening and we got to enjoy some of that for desert on Thursday. I knew I would have more than normal amount of "ice" on the bottom as I was making 6 litres. So to make that a "nice" part rather than the part no one really wants, I added chocolate chips. Now I have to make sure that when I dish up I give everyone their fair share of the icy bottom. :-)
Rachel and Ruth have said that this ice cream is even better than shop bought ones. :-) 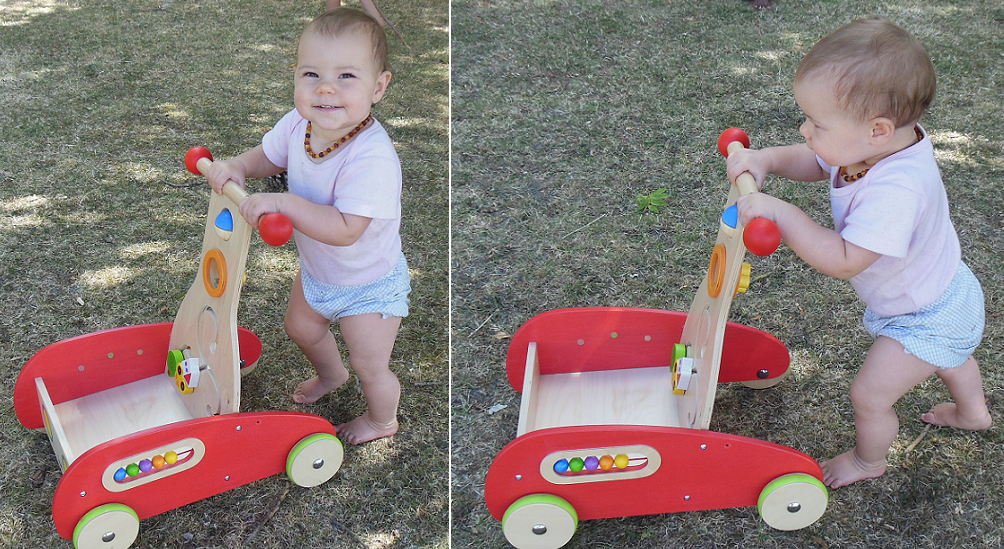 Friday 14th: Toy library opened today. I have been looking forward to borrowing a walking toy for Asher and she was thrilled with it. She walked back and forth across the lounge floor so many times that I thought I would give her a bit of a longer area to walk outside. Such a happy girl. I wonder if we had been able to have this toy for the last month if she would have been walking by her birthday. She is doing so well already with this. 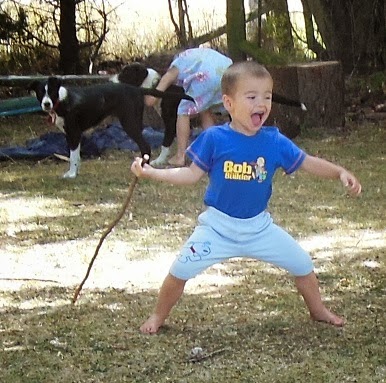 This is what was behind Asher on one of the photos of her walking. I don't know what he was up to but it makes me smile. Brendon says it looks like he is practicing the haka. :-)
Even though Asher had SO much extra exercise today she struggled again so much with her afternoon nap time. She gets so tired and needs to sleep but is just 'high' from her medication. So she spent an hour and a half playing in her cot. The video monitor is a blessing because I know she is safe and she can just play.

I do get to see what she gets up to though which includes: singing and babbling, playing with her toes, opening the curtain and looking outside, opening the draws next to the cot and unpacking the clothes, eating the side of the cot, swinging the picture on the wall, throwing her toys out the cot and the funniest one - putting her blanket over her head and bouncing (which I tried to get a photo of). She cried a lot before her morning nap, so I was thankful that she was at least happy this afternoon. I eventually gave up though and she missed her nap. I do pray that it won't be long before we can get her off the current AED with it's side effects. I phoned the hospital this morning about her EEG results and was told it could still take till next Wednesday or Friday to get feedback. That was hard to hear. I just have to keep my focus on one day at a time.

My valentines day fun was playing with these two before bed. Even with no afternoon nap Asher was still full of energy. Hezekiah getting more sleep than Asher at this stage. It was so much fun seeing the similar expressions on these two faces as I played "round and round the garden" on their hands. Click on the above photos to see them a bit bigger. The first waiting in anticipation. The middle one try both rolled over in the fun of the tickle. And the last showing how they both love grabbing my hair. Lots of fun and a mentally refreshing way to end a tough emotional day.
Posted by Buckland at 10:00 PM