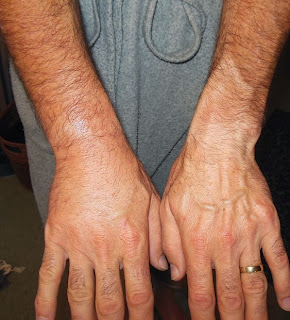 On Saturday at the pool Brendon got stung / bitten by something and the swelling got really bad. The bite / sting was around his wrist but the swelling went all the way to his fingers and almost up to his elbow. This was at it's worst on Monday morning before he headed off for a day of First Aid training. Doing CPR was no fun (and rather painful). Rachel had a bite / sting on her ankle and struggled for a few days with pain too. Thankfully they both healed without any infections and Rachel was fine for her ballet concert on the weekend.


Below: A sweet one of Asher sitting with the puppies.

You have to be up early to enjoy the sunrises now. It's already quite light at 5:30.

So sweet to see Hezekiah playing with the dogs (and a typical boy with a stick in his hand). They follow him around a lot and play so nicely with him. 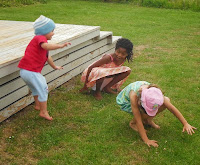 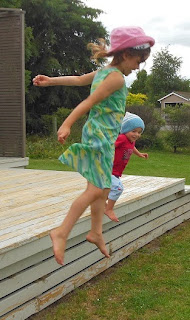 Just before bible study on Thursday Hezekiah got the courage to jump off the deck. He realized how easy it was and so just kept going and going.
Trying to get some nice mid-air shots. 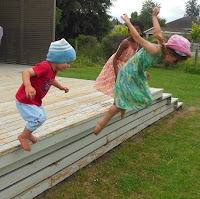 I had enough opportunity. Unfortunately (when I was not looking) he jumped perhaps too close and bumped himself. So he is back to being nervous about doing it. Hopefully seeing these photos will give him a bit of courage to try again. 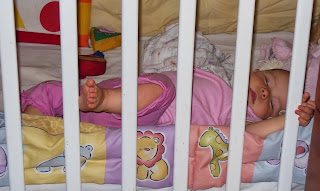 I thought this sleeping position was rather sweet.
One of the "little changes" that I have made is to try and get some "organisation task" done each day (that's the goal at least - even just for 30 minutes - or 10 if that's all I get to).
One of the things that ended up getting done was hanging Brendon's caps up on the wall.

He had wanted to sort out the top of his cupboard and so when I got busy doing that for him I noticed the caps and decided they should rather be out. He will use them more if he sees them and they won't take up all that space in the cupboard. Growing up Brendon had a rather large collection of caps.
So having just 5 (the 5th one being the one he is currently using) is quite a small collection. I have another spot on the wall already in mind for his collection if it now increases. :-)
Posted by Buckland at 10:00 PM