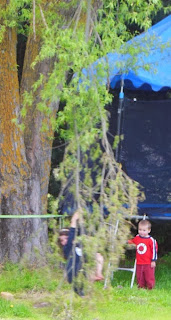 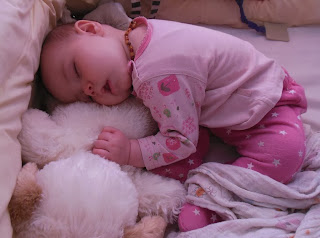 Left: I have been struggling with Asher with her evening feeds for a few days now and so decided it was time for the dummy to go. She is doing really well with adjusting to getting to sleep without it. Only 2 days of struggling really. I just love how she fell asleep here on the teddy that she was playing with.
Right: Wild winds around here broke this branch. It's not loose enough for Brendon to even pull down - so it made a great swing for Hannah. 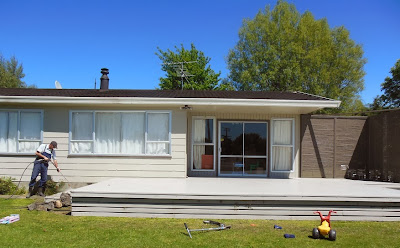 Brendon got started on the deck today with a strong water blaster. The paint is pealing off really badly - so although we have left it for quite some time now - we do finally have to get this old pain all off and re-do it. I know from here it looks nice - but it was getting to a point where I was concerned that the wood would get damaged with how much was exposed. It looks like we will stain it rather than painting it - but for now the big job is getting all the old stuff off.

What it looks like after the first water blaster session. The paint shop man suggested we do a quick water blast and then a week or two later do it again, and again if needed (rather than trying to get it all off in one go). So this is all the prep work for hopefully getting it all finished up in December when Brendon has some leave booked. 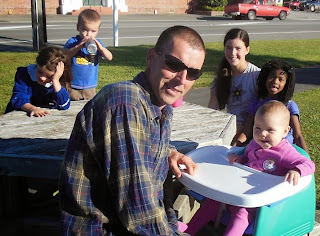 Waiau fireworks day again today and it is becoming a bit of a family tradition to get fish and chips in Culverden on our way up. I am glad we brought Asher's high chair (and I am so very thankful to Kerry for lending it to us) as it's just been so helpful.

The youth organized another obstacle course again this year. Here Ruth and Hezekiah are giving it a go. Ruth ended up getting a spot prize this year (Hannah won her age group last year while this year they did not separate the ages). 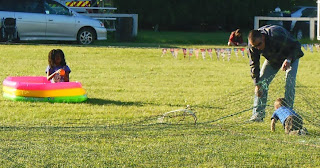 I was impressed with Hezekiah just heading under the net without reservation. No fear in this little man. 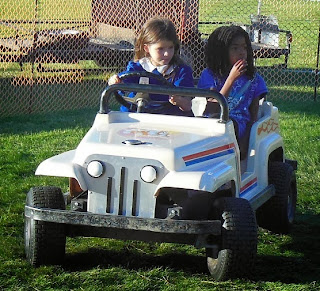 The girls had brought their money with and Hannah was very excited about going on these cars. We were amazed at how very well she did too. 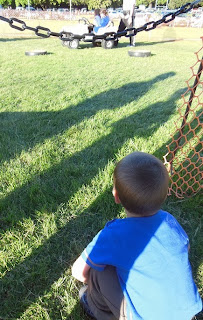 And I was so impressed with Hezekiah's patience as he had to wait for the next round for him to have his turn. The girls got the last of the 3 cars in this round. 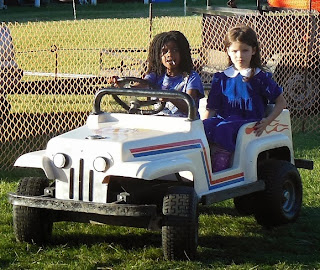 Hannah let Ruth have a turn at driving. Hannah had paid - so she could have driven the whole time - so that was kind of her. 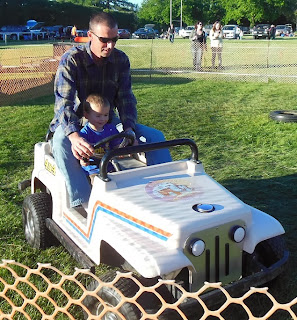 Hezekiah having a great time. 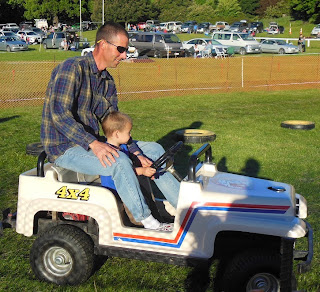 Brendon being so aware of things that he even put his arm down so that I could get Hezekiah in my photo. What a blessing this man is to me and the children. We all love him dearly.
We had front row parking again this year. It's nice for the children to be able to watch without having to look past other cars. 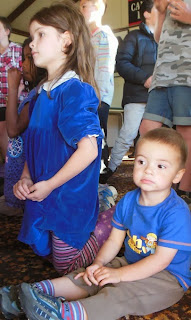 Hannah was very excited about watching the clown this year. I was surprised that Hezekiah watched for a while too. Even Rachel enjoyed watching the show as she picked up on a lot of the subtle jokes he made that went over the head of most of the children watching.

Hezekiah had a turn on the jumping castle and was not at all worried about being bumped over and the business of it all. Such a good jumper too (and nicely timed photo even if I say so myself.) 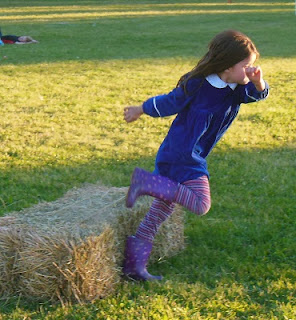 Later Hannah decided she would give the obstacle course a go too. Well done Hannah. 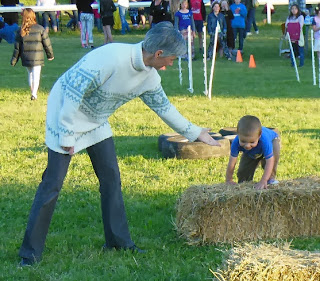 Hezekiah joined her and had so much fun he wanted to turn around and start again when he got to the end. 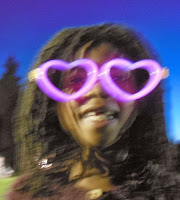 Ruth with some glowing glasses that Hannah bought her. 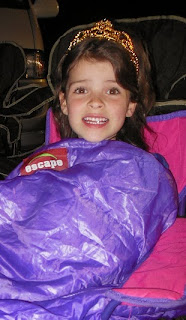 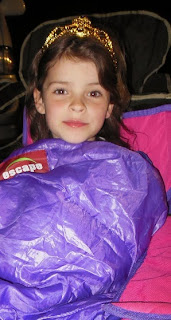 And Hannah with the crown Ruth bought for her. Apparently they had decided that they would buy something for each other.
I have to laugh at the first photo (on the left). She was trying to hard to smile that it actually looks painful. So I suggested she do a nice princess pose for me. The result the very elegant photo to the right. 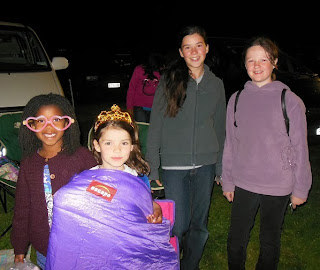 One of the girls from the school turned 12 this week and had a few friends join her at the fireworks for her party. So it was nice for Rachel to meet up with a few of the girls that she is good friends with - Bryer being one. They spent quite a bit of time together handing out tracts. Rachel and Grace did this last year and I was pleased Rachel wanted to do it again this year. She does like having someone join her though - so between Ruth and Briar she at least had company with it. Also a main reason this is the only photo of Rachel from the evening. 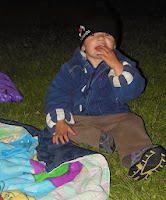 Rachel made some popcorn to bring with which was a nice distraction for Hezekiah as it's a rather late start to the actually fireworks show. This was already 9:30 - so he was doing very well. 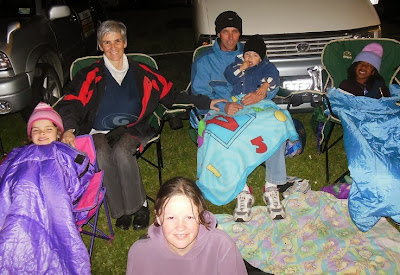 Rachel took this photo of the rest of us. Asher slept wonderfully in the wrap from about 8pm. This was a huge blessing. 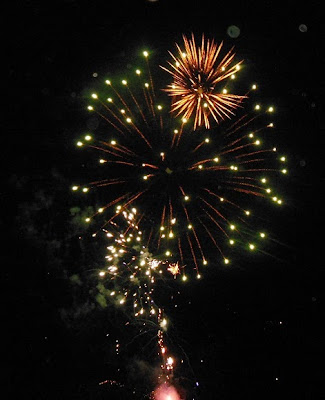 I managed to get this photo close to the start of the show and then spent the rest of the time holding my one hand over Asher's ear so that she was not disturbed by all the loud noises.
It was again a lovely family fun filled day with many wonderful memories made.
Posted by Buckland at 11:00 PM