Video monitor and peace of mind 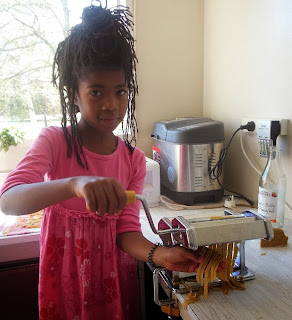 Saturday 5th - Ruth was so pleased when I asked her if she would make oat pasta for me today. Rachel made the pasta and then she rolled it out. She did a great job too. I am so thankful for the wonderful helpers I have (and so willing to help in the kitchen). 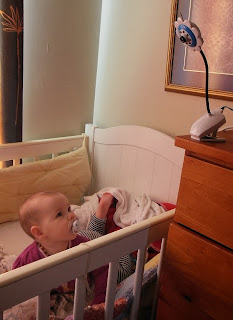 Our homoeopath has been in contact with us getting updates on Asher's epilepsy even though she is away on holiday overseas. Asher had a small vacant "episode" on Monday 30th with eyes pulling to the side again. So we were wondering if it would be a precursor to another grand mal (which has happened with the others) and it has made me more watchful of her. She had more of her remedy after the episode and so far things have been quiet (and this is still the case as I write this on 22 October - over 6 weeks of no seizures - PRAISE THE LORD!!!!). 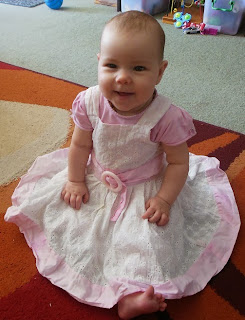 The homoeopath has been such a blessing to us and cares so much. She always asks how I am doing and I was honest with her and told her that it's hard to know how to handle nap times as I don't want Asher to be on her own if she has another seizure. Both the grand mal seizures were during her sleep time - so it may be likely that would be the time it would happen again.
She suggested a video monitor. I had not even though about that and was pleased to see they were not too expensive (not anything as much as I thought they would be). And the delivery was so quick that it arrived on Friday. Asher will take a couple of days to get used to having this funny flower above her bed - but it has already given me so much peace of mind. Now I can check on her as often as I like without coming to the room.
Left: All dressed up for the children's photos this month. 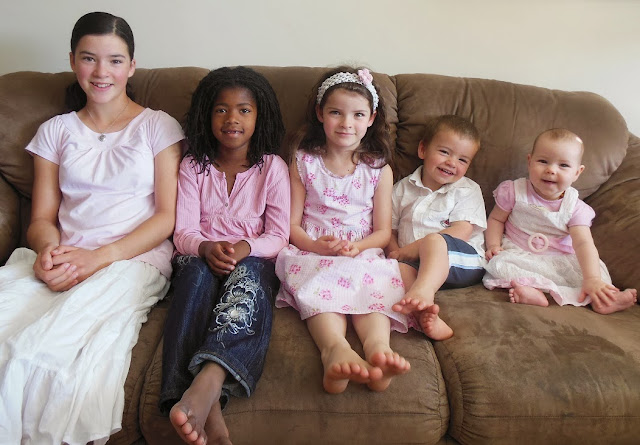 I left the feet in this one for you to see that Ruth is actually quite a bit taller than Hannah - but it's all in her legs. Their bodies have been the same size for a couple of years now - but Ruth has very long arms and legs.

What wonderful blessings these children are to us. Thank you Lord. 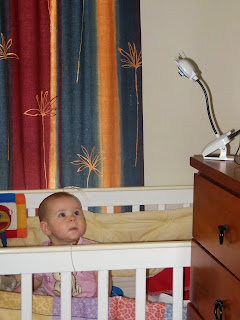 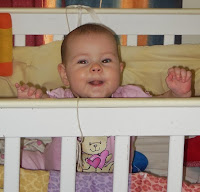 She is getting herself into a sitting position now though - so we will have to move the cot's mattress to it's lower position soon. 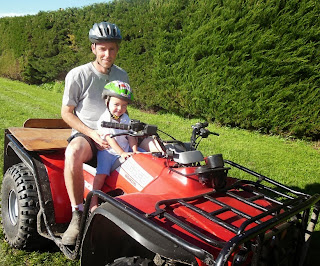 Christine came over to pay the girls for their weeks jobs and told Brendon she would leave her quad bike out for him to take the children for a ride. Hezekiah still remembers the previous ride he got on it and will always tell me when he hears "Christine's bike" around. So he was thrilled to get another ride. 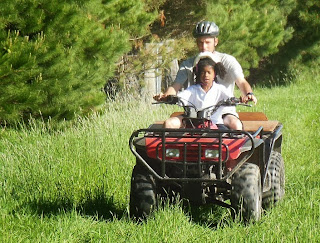 Ruth tall enough to hold on the handle bars with Dad. 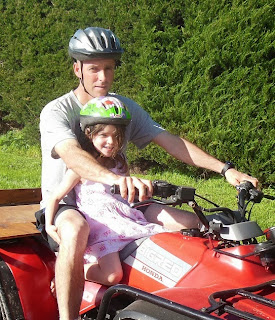 Photos all round. A nice memory for them all. 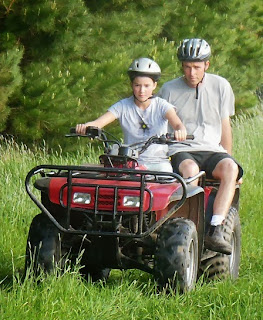 And Rachel now tall enough to ride on her own. Brendon just riding along with to help her with any advice along the way. 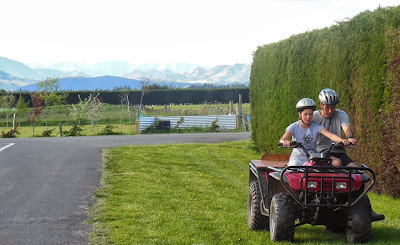 And this photo for Liz. She was just so amazed at our wonderful snow capped mountains. And although not the best photo - the snow caps are still at the back there. 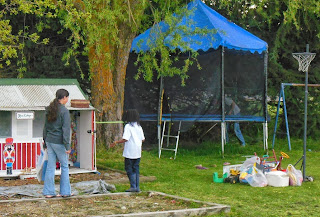 We are looking into getting two puppies but the condition is that the girls keep the toys in the garden all packed up. So they got started today by at least getting everything packed up into packets. A bit of sorting still has to happen. Brendon was pleased to get some edges done this evening too. I had to smile at the two girls out there though. They were singing away while they worked.
Posted by Buckland at 10:00 PM