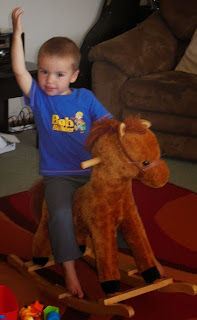 Today Rachel, Ruth and Hannah got to join the local school for their athletics. I was so thankful they could join in this year and was just disappointed that it got postponed from Friday to today. Brendon had taken Friday off for church camp and had planned to help out at the athletics in the morning. He would have loved to watch them run.
I ended up just staying home with the youngest two so that they could have their normal naps. I had considered going up with them in the morning and having Asher sleep in the sling, but I woke with a terrible spasm in my shoulder and knew it would just be too much strain.
I had a fun day at home with Hezekiah and Asher though (and got to catch up on some computer work when they slept after lunch).
Hezekiah has been a bit "Toy Story" mad over the last few weeks and just loves "Woody and Buzz Lightyear". I had to smile when I saw Hezekiah riding the rocking horse and now doing a nice big cowboy arm motion and "yeeha". Learning well from Woody. :-) 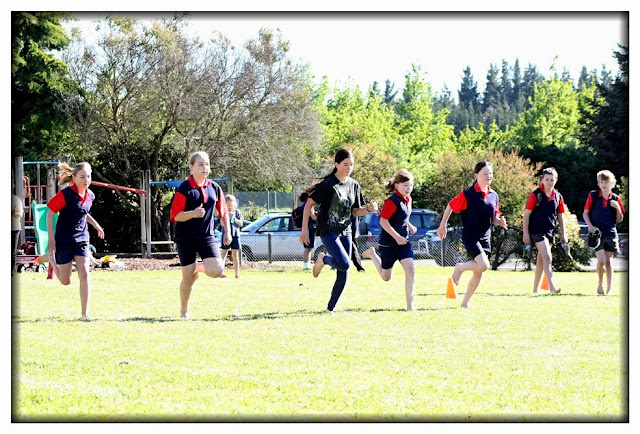 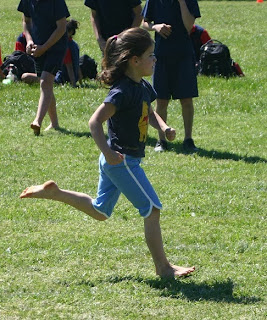 Above - a beautiful photo of Rachel and the other girls her age taken by Val (our one neighbour). There was a bit of a mix up with Rachel's grouping and when she did the 100m she was put in with the 11 year olds. She then ran back to the start and ran it again with the 12 year olds. It will be great to see how she does next year without the extra 200m. :-)
Unfortunately I did not get any photos of Ruth. I think her preferred distance is the longer runs but she was still thankful to be able to join in on the day.
Tina (our neighbour on the other side) took this lovely photo of Hannah. I think it took Hannah a bit of warming up to the whole idea of the day. When she got to the 300m race she ended up moving across the lanes and so they had to stop her and move her back to her lane. She had been in front and this apparently put her back quite a bit. But that did not stop her and she quickly caught up to the others and won!!!! It will be exciting to see what she can do next year now that she knows a bit more about the rules and the idea of going as fast as you can. Before hand she had told me about "running with" different friends as she remembers running with others at the cross country. I think she gets it now that you don't actually run with them, but you see if you can run faster than them. :-)
So a great day of learning, exercise, friends and fun. Exhausting for them all though as we had to leave for ballet not long after they got home.
Many thanks to the local school for allowing the girls to join in.
Posted by Buckland at 10:00 PM