Monday 9th: Our unexpected day in the hospital with Asher on Monday is recorded here for those who want more details. She had another seizure but all is fine and we count the many blessings from the Lord throughout the day. 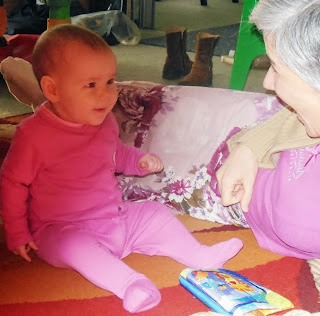 When she was in hospital after her first grand mal they made a note on her report that she was not sitting. So I have been making an effort to get her into a sitting position since then. And although Monday's report said "not sitting unaided"......
This was a photo Rachel took on Tuesday morning (10th). Not the best photo (the light was not ideal) but Asher is sitting so very nicely.

I still include this photo as it reminds me of the warmer weather we have been having. It's been lovely for me to have my summer skirts out with their lovely colours. Although I have had to made adjustments to my skirts now so that they don't fall off. :-) 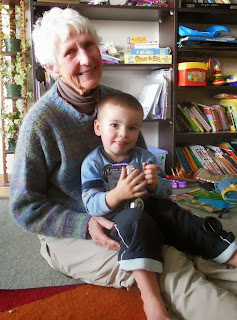 Such a strong girl. We have quickly been able to actually leave her sitting on her own now because if she does happen to loose her balance or lean back too far and roll back - she holds her head up so that it does not bump the floor.
Noortje popped in for a visit today and it was lovely to see how Hezekiah enjoyed the time with her. Another Nana for him to enjoy.
The photo below was taken on Thursday 12th. On Wednesday we had a bit too much wind again and the poor canopy got knocked off the trampoline again (and a few of the upright poles bent totally over again). At least the tramp itself was secure and did not go flying across the garden again.
We had to laugh though because the "tents" that the girls had made to the left (especially the far left made with just sticks into the ground) were fine. I think we will be moving the tramp into their spot now. :-) The gap between those trees in the corner is just too much of a funnel for the strong winds. 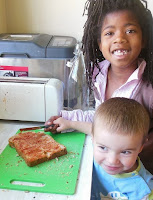 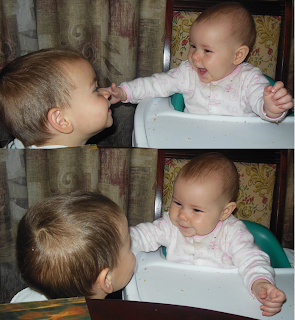 A favourite lunch for the children is "pizza bread". Today Ruth let Hezekiah help her make his. He just loved spreading the tomato sauce on. He now opens the fridge and gets the sauce out for his lunch. Then it's oregano sprinkled on and then loads of home made cottage / cream cheese and into the microwave for a minute. Hezekiah and Ruth specifically love my home made cheese and it's great for them to be getting something so healthy and filling.
Right: Hezekiah is enjoying Asher so much lately. And she is loving all the attention. 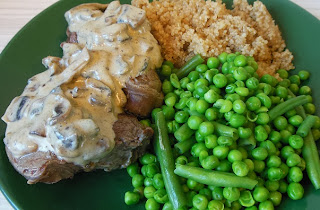 Friday 13th. Another first for me this evening was making a mushroom sauce for our steak. I can't believe I have not done this before. It was simply delicious. 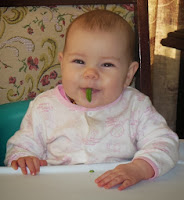 It made me think of Grandpa though. When Brendon and I were first married we would often go out for Sunday lunch with his parents. His Dad would almost always order mushroom steak. We miss you Grandpa.
Asher enjoyed chewing on a few beans at dinner.

Saturday 14th: We had the girls bible study again today and it was such a beautiful day for it. The other children had a great time playing with Brendon outside and when the study was done they all stood on the deck playing "catch" with him. Although we don't plan on Hezekiah playing rugby (we are both from soccer playing families) it was great to see how much Hezekiah enjoyed it and how the shape really helped with catching. Nice to get this idea with his birthday coming up. 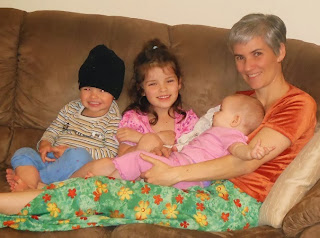 Fun with my 3 little munchkins that evening. Brendon had given Hezekiah this beanie that was too small for him and he just loves having one of Dads. 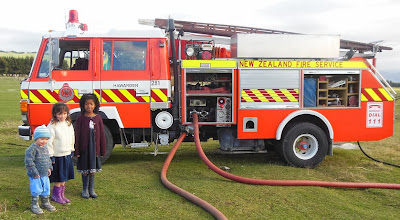 On Sunday morning Noortje called to let us know the fire brigade were doing a controlled fire behind her home. So we headed over to have a look. 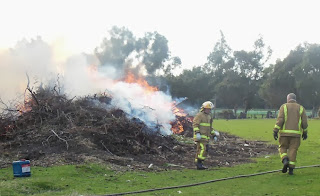 People have obviously been putting the garden rubbish here for a while and they want to get it burnt before the fire restrictions come. It was a great opportunity for the fire brigade to do some training though - so they made good use of it. 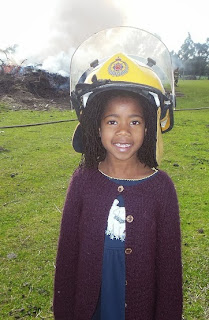 Sam was so surprised to see that his had actually fitted Ruth's head. She really does have SO much hair. :-) 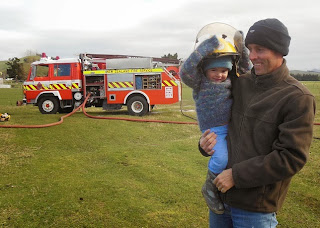 It's a really heavy helmet and Hezekiah decided to keep holding onto it. 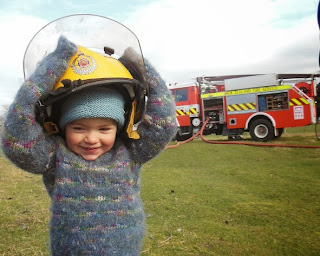 So much fun - especially for a little boy. He got to sit in the fire engine for a bit and it was a bit of a challenge to get him out when it was time to head home. :-)
Posted by Buckland at 10:00 PM