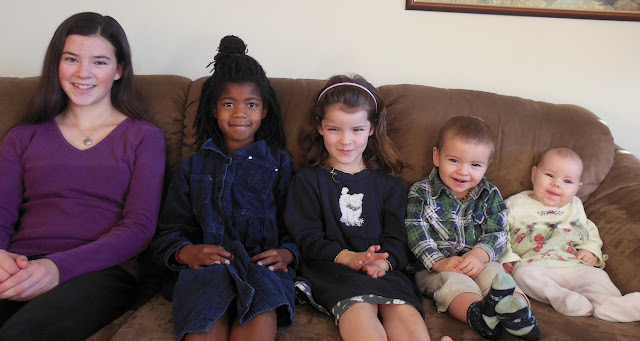 Monday 1st July: Wow - July already. Time for the children's photo again. Lovely to be able to get Asher smiling a bit for the photo. 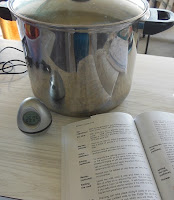 I get fresh milk on Mondays and Thursday as the moment (as the farm I normally buy from have dried off all their cows). I have been motivated again to get some cream cheese / cottage cheese made and so had a go with a different recipe today. The milk needed to be kept at 25 degrees and that was the temperature of the kitchen through the whole day - so that worked really nicely and I did not need to worry about actually keeping it warm while it set. 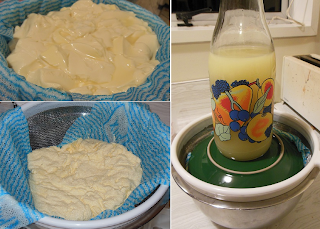 It's such a quick cheese to make and it's so rewarding to have it ready by the end of the day.
Top left - the curds starting to have the whey drained off. Right - using a bit of weight to speed up the draining process (just using the whey that has already come out to put weight on the curds). Bottom left - amazing how much volume that whey takes up.

Tuesday 2nd July: There have been some beautiful sunrises and although it's not nice having such short days (sunrise before 8am and sunset just after 5pm) it is nice that everyone gets to enjoy the sunrise. This photo captures a bit of the richness of hte colour. 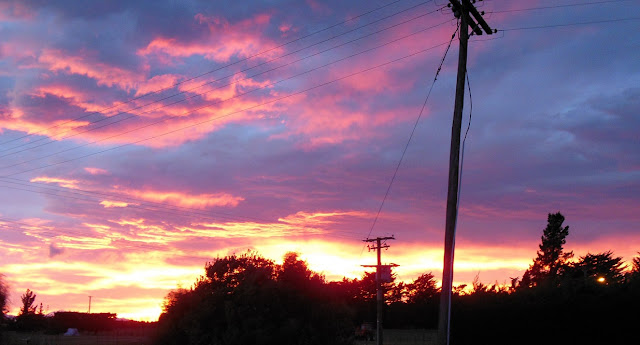 While this photo captures a bit more of that delicate beauty. It really is amazing to think about how much our eyes can take in. Photos (especially taken on such a simple camera and totally unedited) just capture a glimpse of the beauty that we get to enjoy. 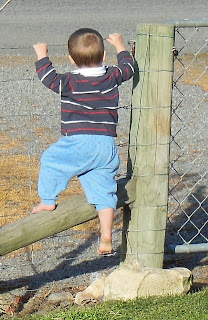 There was a tractor working over the road today and Hezekiah just loved watching it. Eventually he got frustrated with his view from the deck though and wanted to get closer. I watched him head over to the gate and try and open it. I am so glad the latch is on the OUTSIDE as he was not able to get it open.
He did let me know how much a monkey he is though on Saturday (sorry this is a bit out of order). Brendon and I were working on the chook run and the younger girls and Hezekiah had gone off to play. We assumed they were watching him and they just got distracted and thought he was around with us. I heard him calling "help me" and when I looked over I got such a fright. He was ON TOP of Brendon's shed.
I took a photo afterwards to show you. He was standing where that red arrow is and he was NOT asking for help to get down. He had followed Patches and she was on the garage roof. He was standing calling us to help him get onto the garage. 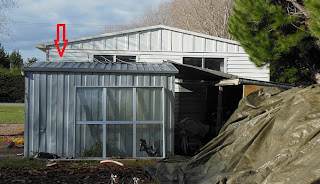 There is a gap between the shed and the garage - so I am very pleased he did not try on his own. Although I got a huge fright both Brendon and could not help smiling. A real little monkey with absolutely no fear.
We can only think that he climbed up the wood stack on the right, onto the little wood shed, over that thin piece of metal and onto the shed roof (navigating past the old antenna that is lying up there).
Thank you Lord for keeping him safe.

Wednesday 3rd: I bought a copy of Trim, Healthy Mama a couple of weeks back and have been trying out some of their recipes.

It's the first time I have every used things like Stevia, almond flour and coconut oil. One of the things that was a very quick success was their "bread in a mug". They gave the idea of using it as a pizza base and so Rachel and I spent a bit of time today making a stack of pizza's for Brendon's lunches. I cooked the "bread" in a frying pan, topped it with tomato sauce, bacon, pineapple and cheese and then popped them in the over to melt the cheese. How nice for him to have such a "treat" of a meal but it be so good for him. 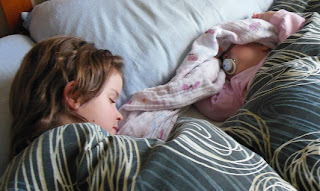 No carbohydrates in this meal - just loads of wonderful protein and fat. And all he needs to do is take one out the freezer in the morning and pop in on the toastie at work to heat it up for lunch. We were so pleased at how impressed he was with our efforts. :-)
Asher still stirs half way through her long nap after lunch. As I was so busy in the kitchen with Rachel I asked Hannah to lie next to her and if she started waking up - to just check that she had her dummy and help her get back to sleep. Hannah liked posing for this photo (which Ruth was so pleased to take). :-)

Thursday 4th: I try to find different things for Hezekiah to play with and give him different ideas. It's always lovely to see how the girls enjoy the fresh ideas though. Here is Ruth's creation with the Jenga blocks. 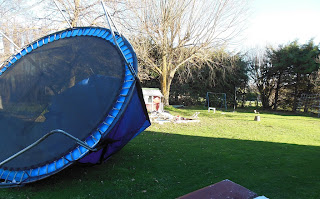 Friday 5th: We have been in this house for over one and half years and for the first time the wind was so bad that it moved our trampoline from it's safe spot in the far corner of the garden. Those big hedges had protected up till now - just look at the distance it has been moved. (And although we did originally have plans to tie it down we never got around to it and thought after a year that it would be fine.) 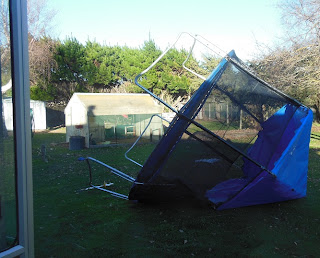 I got quite a fright when Ruth told me the tramp was outside the kitchen window. I was concerned that another gust would blow it into the glass around the back door so I called Brendon and asked if there was a chance he could come over and help get it saver. He was so surprised to hear it had moved because there had been no wind on the farm - and it's just 10 minutes from us.
Thankfully he could quickly pop over and with a bit of work we managed to take the canopy off (so sad as it was such a big job getting it on and we did such a good job of securing it this time). We then moved the tramp back to the corner and Brendon quickly used his straps to secure it to the boundary posts. It's going to be a big job getting it into a usable state again. 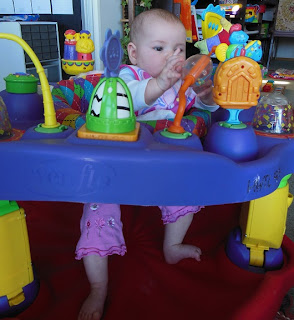 We have to take the net off and check the condition of all the poles. Some are bent but we will have to see if they can still be used. It's rather frustrating and sad as it's going to take a bit of time to get fixed and I had been enjoying getting out and playing on it with the children over the last week (which they had been absolutely loving too).
A friend had said she would pop in this morning and with all this drama I was running a bit late in getting to the toy library. So she stayed with all the children (she had her grandson with for a visit too) and I got to go on my own which was a nice break after a rather stressful start to the day. 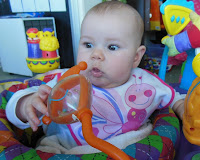 I had gotten this "exersaucer" for Hezekiah when he was a baby and thought Asher would enjoy it now too. She was thrilled and already has a few favourite toys. 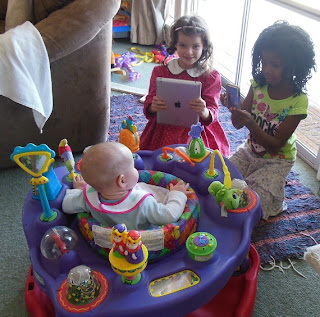 It was so funny to see Hannah and Ruth taking photos of her. Lately they have been taking a lot of photos and videos with the iPod and the iPad. Isn't it incredible how technology goes. They won't be asking for a camera as a present - it will be an iPod of their own so then they have a very multi functional tool.
I had a day of experimenting on Saturday. I had a packet of walnuts that I thought I should try and use up.

I attempted what looked like a lovely recipe for walnut and date biscuits (that had NO flour or sugar) but had no idea how HUGE dates were in America. 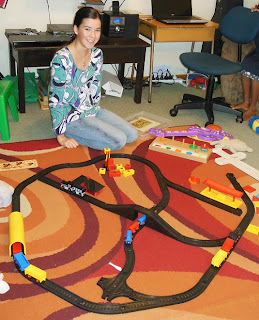 So when it asked for 10 dates I counted them out. Only when I looked at the next recipe I wanted to try did she say - 200g of dates - about 11 large dates (and she had a photo). My tiny 10 dates were only around 50g. So these unfortunately went in the bin and we will have to try again.
I did managed to make walnut butter - but that also confirmed for me that the walnuts were actually too old and needed to be thrown out. I now know what "rancid" tastes like. Yuck!!! I look forward to ordering almonds and perhaps other nuts on my next "bulk food" order and having a go at some nut butters and nut flours.
Sunday 7th: One of the other items I got from the toy library was this train set. Rachel had fun designing a track for Hezekiah today. Well done Rachel (she managed to use all the pieces and make such a fun track.
Posted by Buckland at 10:00 PM