Our weekend of waiting 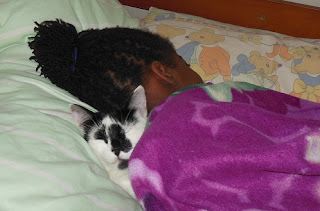 Friday 1st of February. Baby is clearly not interested in arriving on or near due date.
I had to smile when I saw Patches lying with Ruth this morning - under her blanket. And this was on the top bunk too. So sweet. 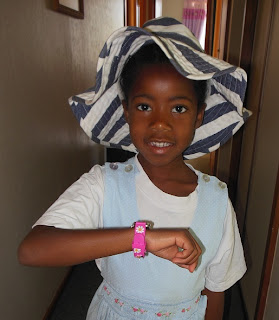 Noortjie had popped in for a visit yesterday afternoon and again invited the younger girls to pop over whenever they wanted for a visit (and to give Ruth some time on a piano). So we organized for this morning. Ruth got her watch on (that she got from Grandpa and Nana for Christmas) and asked what time they needed to be back. It's great that she just lives up the road and Ruth is responsible enough to get there and back safely with Hannah. They had a fun time and Ruth had an unofficial first piano lesson with the beginners piano book we have and got her first star. 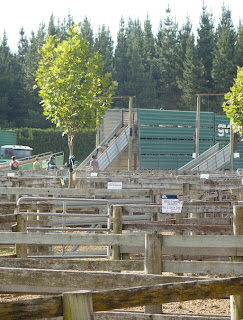 Noortjie then invited the girls to go and see the ewe sales later in the afternoon with her - when it was a bit cooler. So from 4 to 5 they were learning all about sheep and watching them get loaded onto trucks. A fun time out for them both. 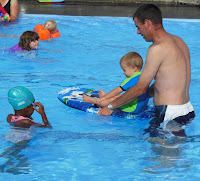 Then it was dinner and down to the pool to cool off again. It was a lot busier there today and nice that Rachel is starting to play with whichever older girls are there at the same time. Hezekiah got to borrow this board for a ride for a little while too. 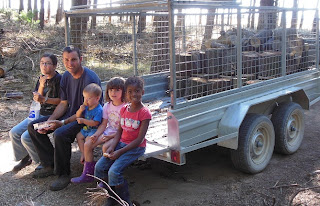 Brendon was up early on Saturday morning to go and get wood. He left just after 5 and was back before the younger children woke up at around 7.  After breakfast we all headed down to get some more. By our morning tea break we had gotten this much loaded. 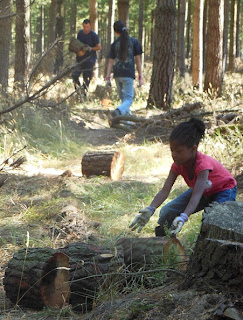 We had good team work going as the wood is not close to the road. Trees had fallen down in this area and so they have been cut up for firewood - just needing to be collected and then split. Hannah and Hezekiah spent most of the time in the ute as Hezekiah just loves playing in there. Ruth and I worked really well together. I would throw smaller pieces closer to the trainer and then she would throw them even closer - to be loaded at the end on top of the bigger stumps. When we had done all the smaller pieces we started helping Brendon and Rachel with the bigger ones. They would bring them to where there were no more logs in the path and we would roll them down towards the trailer. We managed to get so much loaded in a short time after our break. 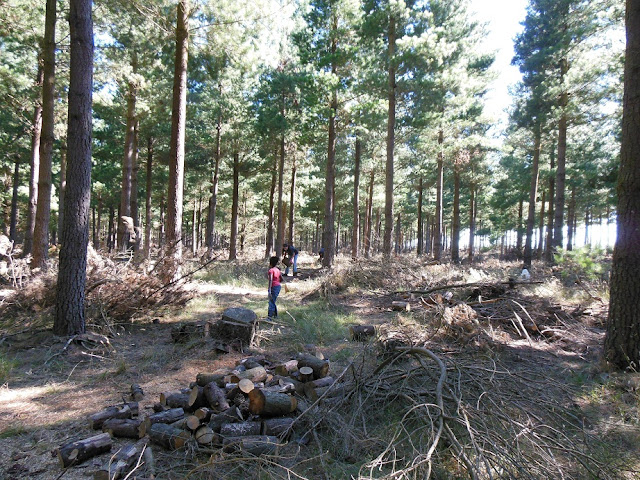 This gives you an idea of where we were working. Very beautiful and thankfully nice and shady so not too hot. This pile closer to the camera is the one that Ruth and I got stacked up - waiting for the bigger ones to get loaded. Even with loading it was team work - either Rachel or Brendon putting the stumps into the trainer and the other rolling it in and stacking.

A nice trailer load to bring home. Not full - but a good amount for our families team effort. Brendon and I had thought the physical activity might encourage labour to get started - but no - even with the bumpy ride there and back things are still quiet today. 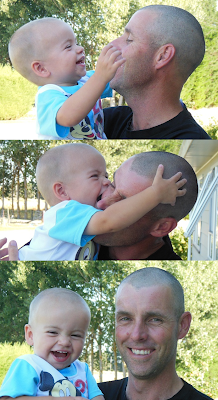 Once it cooled down a little bit in the afternoon it was time to get the "boys" hair cut. I thought I had used a number 1 on Hezekiah last time - but it must have been a 2. His hair is so short. Oops. I had a fun photo session with the two of them after dinner. 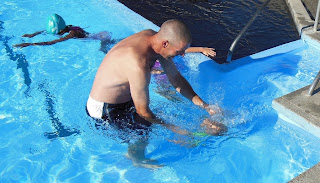 And then it was back to the pool to cool off again. Brendon has started letting Hezekiah go under for a second when he gets off the last step. He is getting really used to it now. It's great that he is so relaxed in the water and enjoys it so much. Hopefully he will join Ruth in never having a problem with getting his head under. Poor Rachel struggled really up until this year (she did it last year but hated it) and Hannah will I am sure hate it for a couple more years still. 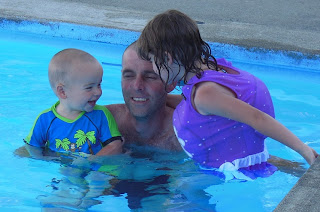 Hopefully Hezekiah's enjoyment will help her overcome her fear though. Already she was thinking about getting herself under. She has to jump off the bottom step to try and get under. She managed once - but that was more than enough for her. 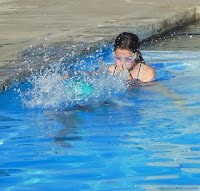 Ruth wants to jump into the deep end now that Rachel is enjoying jumping and diving in so much. They both wear goggles and so take turns watching each other under the water. Rachel is always there to help Ruth get back to the side once she comes up. 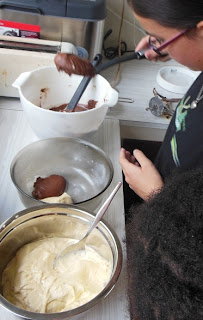 Sunday morning saw Brendon sleep in which was great. I decided to make use of him being home and the cooler start to the day and went out for a walk up to the shop and back at 7am. It was lovely and fresh out and I got some reading done on the iPad while I was at it. I even managed a 2nd walk at around 10 - just as the clouds were starting to burn off and the day starting to warm up.
Rachel had a busy morning in the kitchen. She made another chocolate thank you cake (for Sarah who had watched them on Friday and blessed Brendon with a meal that weekend) and then she made a marble cake. She had a lot of fun doing something different. Rachel is hoping baby will be born tonight as then it could be the birthday cake. If not she will probably just make another cake when baby is born. I am sure no one will complain about another cake to eat. :-)
Thankfully it was a cooler day and so Rachel got to take Auto for a ride up to the domain. She had a lovely ride and he cantered beautifully for her. After dinner it was lovely and cool and as Hezekiah was a little bit miserable I thought I would take him for a walk in the pram. The younger girls wanted to join me - so we all ended up going for a nice long walk around the block. 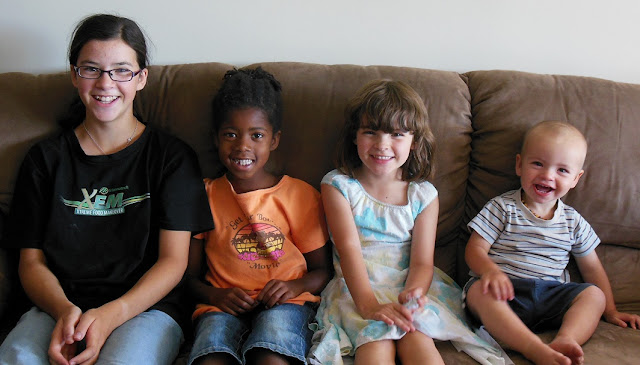 It's the beginning of the month - so time for an updated children photo. We have moved to the bigger couch now - and are just waiting for their brother or sister to join them.
Posted by Buckland at 8:00 PM