40 weeks and what a wonderful day 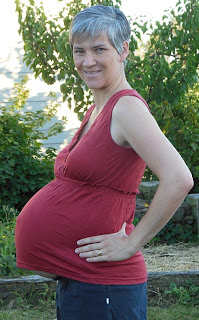 40 weeks today. Rachel took this photo early in the morning before the heat of the day drained all our energy out again. I can't believe it's Thursday already. The Lord has been so good and has really helped me this week in being patient as we wait for baby and just taking it one day at a time. Hannah was 4 days over her due date - so we could have a bit of a wait still. 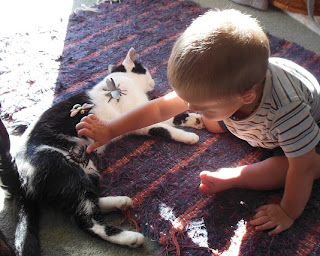 I had to smile at Hezekiah this morning - decorating Patches with his bugs. He really does love playing with his lovely bug collection. The only problem is that he loves chewing them and so when he sees a real bug in the house - the first thing he wants to do is pick it up and put it in his mouth. 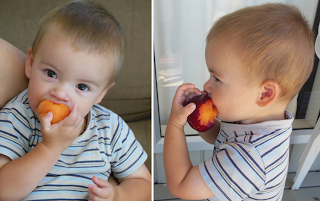 I was thankful for all the lovely fruit we got on Monday. In this hot weather it has been a real blessing. Hezekiah is really enjoying them and he gets through these huge apricots and plums all on his own.

Rachel and Ruth headed off for their sewing lesson this morning and so Hannah and Hezekiah had some time on their own outside. 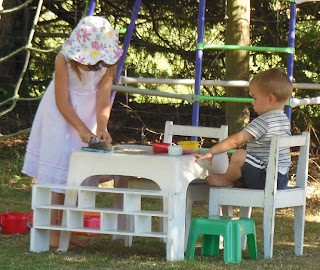 I am used to having one of the older girls "keep an eye on him" so it was a new experience for me. Every now and again I would just check that he was still playing with her and not up the climbing frame or into some other dangerous situation.
It was sweet to watch him quietly observing for the first few minutes.
Then he got into the swing of things and sat himself down at the table for their picnic. It must have been a mud cake today. Hannah cutting up the pieces for them. I was pleasantly surprised when they eventually came in that he had not actually eaten the sand.
Hezekiah then had a nice nap, Hannah watched a movie and I had my 40 week visit with Sandy.

Brendon was feeling a bit better today and so we headed down to the pool after dinner. You know how hot it is when the pool is 29'C and it cools you down. Brendon said his head actually felt a lot better when he was in the pool. A friend of mine had measured 38'C in the shade today and 52'C in the sun.

One of the things that Ruth struggled with in the pool was getting down to pick things up off the floor of the pool. She is not worried about getting under the water - it's just really hard for her to get down. Today she decided she wanted to try and do a handstand (as she had heard me telling Rachel about doing them as a child) and just like that - she could get to touch the floor. So perhaps the distraction of trying to do something else helped her. She is so pleased though.

Rachel's swimming teacher was at the pool checking the temp ect and so I asked him if he had any tips for Rachel with learning to dive. It was the one thing they did not get time for last week and Rachel knows it's just 1 of the 2 things she still needs to learn for the current level she is on. 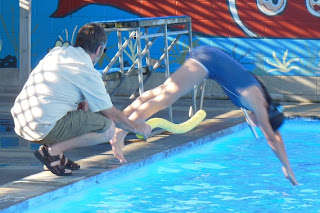 He said he had actually just watched a video this week on an idea of how to teach diving and so he got a pool noodle out the store room and spent a few minutes with Rachel. The idea is to practice diving over the noodle while you are in the water - moving deeper and deeper and so having to bend your legs more and really get high to get your body over it. After a couple of minutes he got her out to try from the side - and just like that she could dive. I checked the times on the photos - he literally taught her in 5 minutes. No more belly flops for Rachel. She was thrilled. And I was so proud of her and so thankful to Paul for the time he spent giving her this "extra lesson".

Hezekiah had been "jumping" to Brendon. This means him "counting" to 3 (so sweet to listen to) and then stepping off the side. Brendon then encouraged Hannah to jump in again. At first he thought he was far enough away but she jumped so far he still had to catch her. So he moved even further away. What a great jump. And under she went. Obviously her "Nanny Mac Fee" togs (as they are now called) meant she popped right up - but it was great for her to get her head under again. She is still not excited about the idea - but it's a HUGE improvement from last year for her to even get her head under once each swimming session - with no tears. 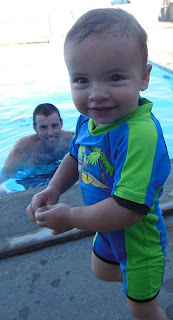 I had been watching that Hezekiah stayed back while Hannah had her turn but then I went to take a photo of Rachel diving. When I came back Hezekiah had obviously been under. Hannah had wanted to jump again - but too Dad and not go under. So they counted 1,2,3 and you guessed it - both Hannah and Hezekiah jumped in. 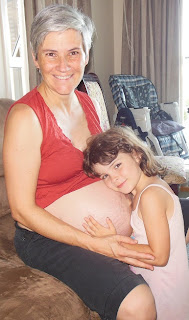 Thankfully although his leg looked scraped from stepping in, it must have only been red from bumping it and later you could not even see any red at all. Thankfully he was not too stressed about having gone under either. Brendon has decided to start getting him under a bit more regularly now so that he learns to close his mouth and not get scared about it. He loves the water on his head in the bath or shower - so we hope he can be relaxed about it in the pool too.
Every evening we will pray as a family and Hannah has her predictable things that she prays for. After that prayer though - when we say goodnight - she will come over to my tummy, kiss it, hug it and then pray for baby. 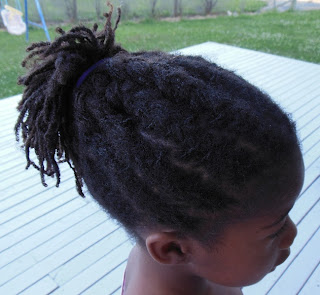 Before due date she would pray something like "please let baby be born in 3 days" but it has now changed to "tonight". As she was 4 days after her due date - she may have a few nights to wait.
Not only did I get all of Ruth's hair "tightened" before baby arrived - I even got it put up in this style this afternoon. When she goes swimming we have to put it up in a top pony so we can get the cap over - so this way we don't have to worry. It is a very helpful "swimming" hair style and looks really pretty too. 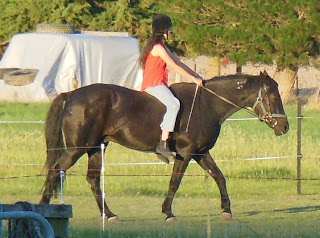 It was a long busy day and although Rachel got mucking out done early this morning (she goes out before 7am so she can get it done before it's hot) she has not gotten to ride much with these terribly hot days. I saw Christine out with the horses this evening so suggested Rachel go have a chat with her and perhaps get a ride on Auto. Christine suggested she bring Auto into the field to ride as they were moving the other horses around. It was nice for her to get out riding - but with Christine there Auto misbehaved quite badly. So she was a bit frustrated when she got back - feeling like she couldn't control him the way she used to. It's lovely that she could at least get out there at 8:30pm and enjoy the beautiful evening.

I had a great day too. Not only getting Ruth's hair done but actually getting to that final thing on my list - my desk. It's been far too long that things have been piling up on it and it was so good to finally work my way through everything and put everything "in it's place." 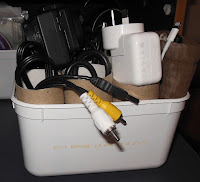 Part of that was also creating places for things including all the cables that were sitting on the one shelf. A great article went around fb a couple of weeks back and one of the ideas was using toilet rolls to keep cables neatly packed. It works really well - even though I have a couple with big ends that don't actually fit into the roll. It still keeps everything neat and tidy and makes it supa easy to clean around them now. So all in all a great day.
Posted by Buckland at 10:00 PM