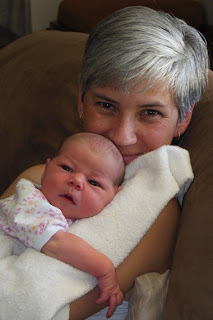 The camera seemed to be forgotten with me not using it - so eventually today I asked Rachel to take this photo of me with Asher. Thanks Rachel. It's a very special one.
And I got lots of other nice photos too. Enjoy those while I journal a bit about our first 3 days.
Asher decided she liked doing her wee once the nappy was off - so after that happening twice we got the potty out. So again - from just the first day baby has been on potty and it has been going really well. She seems to be doing even better than any of the others and she will even wiggle around and I can tell she "needs to go".
My milk came in last night (end of 3rd day) and I was preparing myself for a couple of uncomfortable days. It went really well though. I thought it was rather funny that after spending a few months not being able to sleep on my back - I would now have a night where I could do nothing BUT sleep on my back.

Through the night and today I have managed to get things really comfortable. While she feeds from one side I allow the other side to just flow (with a little bit of massage even to make sure I don't get any blocked ducts). It was a strange day with feeding like that - but it did the world of good and by this evening I knew the worst was already over.
I sleep really well at night between feeds and so I am feeling really rested. I also get to sleep until Asher wakes up in the morning - so that has been where I have been able to catch up on what I perhaps lose through the night. No afternoon naps this time around but I know I don't need them. I am feeling really good and I thank the Lord for that.
We have been blessed with meals from friends and so it's been a lovely relaxing few days. The children all love getting their time to cuddle Asher. I realize now that I don't have photos of Rachel but that's probably because I am "supervising" the younger ones when they have their turns. 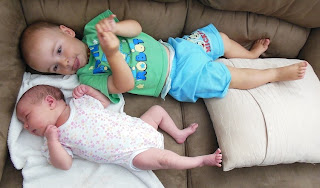 Hezekiah had a fun time on the couch with her today. He just looks so huge compared to her. He is really good and being careful with her and gives her so many lovely gentle kisses. I do wonder when she will be "Asher" and not just "baby" but at least he can say baby and so we know who he is talking about. He does not have a recognisable way of saying any of the other girls names (even though he knows their names) - so she will be "baby" for a while still. 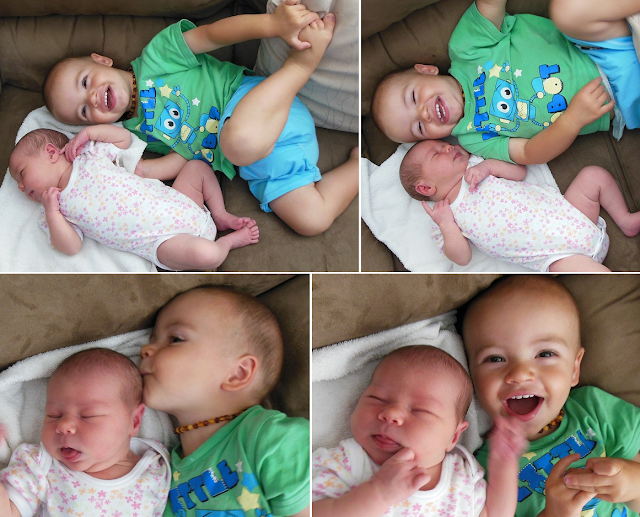 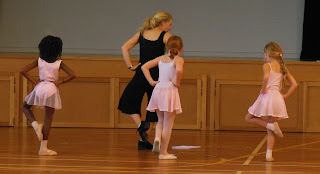 Last Tuesday the girls had their first ballet lesson with the new teacher. We were blessed to have 3 different ladies take the girls to their 3 different lessons (Hannah 3:30-4, Ruth 4:30-5 and Rachel 5:45-6:30). It's going to be a big adjustment with having to actually travel to lessons (and a good 30 minutes away too). This week Brendon took Ruth and brought the younger two home (thankfully Hannah can get a lift to her lesson every week but needs the lift home). So he got this photo of Ruth's group (yes - it's just the 3 of them). 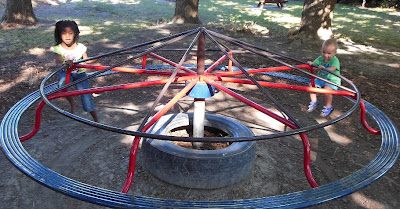 He spent the extra time at the park and they all had a great time. It was also a nice "time out" for me just having Asher at home. Rachel caught the school bus with a girl that is in her class and spent the afternoon at her home before they headed off to their later lesson. So it was a treat for everyone today.
Posted by Buckland at 10:00 PM