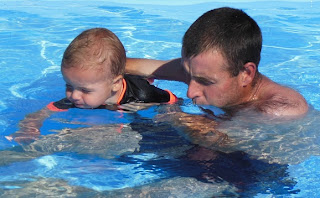 Monday 10th: Down to the pool this afternoon and a lovely 24 degree water temp today. That was high enough to even tempt me in. It still took ages to actually get myself in - but once I was in it really was lovely and the added bonus was getting 18 lengths done. A much preferable form of exercise for me - especially on these hot days.
Hezekiah already learning to blow bubbles with Dad. :-)

Brendon was back to work today. We really enjoyed having him home last week. Brendon likes to keep busy though - so it was a nice week for him too as we got loads of things done on our "to do list".

Thursday 13th: One of the items that we did not get around to last week was defrosting the upright freezer. I really wish I had made the effort as we discovered Wednesday evening that the door had not sealed properly and all the food was defrosted. Defrosting the freezer at 10pm was NOT what I had planned - but I did not want all that ice melted on the garage floor in the morning. Thankfully nothing was smelling really bad yet - but we just have no idea how long the meat has been defrosted - so we just did not want to take a chance. A friend with a few farm dogs took the meat (so that Brendon did not have the extra work of digging a whole for it all). It was so disappointing to have to through so much food out - at least 3 weeks worth of meat. And the worst for me were the 2 Chicken-a-la-King meals I had frozen in there. So much extra effort and ingredients and I was especially looking forward to enjoying those perhaps even after the baby is born. But I had a lot to be thankful for - so I did count my blessings. One big one being that we have a 2nd freezer that still had meat in as well as the other 9 frozen meals I had prepared. 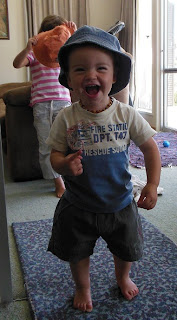 Friday 14th: When I bought the cheesecake ingredients I bought a 2nd tub of cream cheese and so today I made another cheese cake - this time with Mars bars in (and a bit grated on top). Yummmyyyyy.
Saturday 15th: Brendon was working this morning but Hezekiah still gets time outside with his sisters. He is getting really good at wearing his hat outside now (it helped that he sees Dad always has one on). It's quite sweet to see him when he comes inside - he heads for the laundry to hang his hat up with Dad's caps. I wish the girls would learn to put their hats in a specific place so that they can be found easily. :-)
Such a cutie pie. 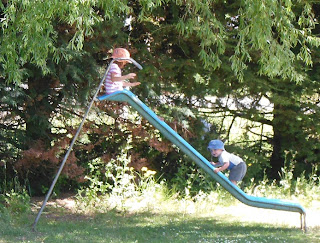 Playing in the garden again after lunch and this was where I spotted him. He has seen the girls climbing up the slide so decided he was more than capable of doing that himself. Brendon headed over so that he did not get much higher. I am beginning to wonder if I want this slide in the garden or not.
It's hard to know where the balance is between keeping things safe and letting them explore and learn. 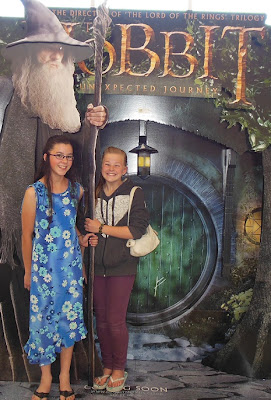 Just after 3pm Brendon, Rachel and I headed into town to watch the Hobbit. A friend's company had booked the whole 5:30 show and we were pleased that there were an extra few seats available so that we could book a place with them too. At only $8 a ticket (and they normally go for at least $20). It's been ages since Brendon and I went to the movies together (possibly even 3 years) and then the extra treat of watching a movie in it's first week of being released. That must be a first for us.
Rachel has been looking forward to this for weeks now. She even went dressed as an "elf" (although she was a bit too shy to have a photo with the man who was dressed up as Randolf).
Rachel and Rebecca are both Hobbit and Lord of the Rings fans - so it was really nice that they got to watch it together too.
It was a great movie and we were so pleased to have such a treat. Thanks to Holly for watching the younger three children for 7 hours so that we could go. 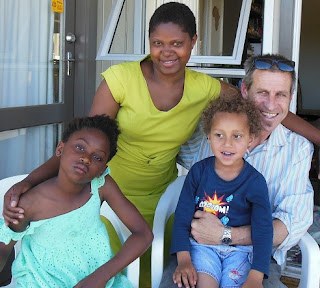 Sunday 16th: This day was filled with highs and lows. It was wonderful to have Regina and her family come for lunch. I met Regina when I was having blood drawn in town a few weeks back and so it was great to meet her family today. She met Bob (a Kiwi) when he was working in Malawi many years ago. They got married there and Diana was born there. They then moved to NZ and Joshua was born here. They plan to move back to Malawi in the next year or two to start an orphanage. You can read about their plans here: http://mphatikizo.org/
The low for today was when the slide (that I started wondering about yesterday) caused tremendous pain to poor Diana (thus the very sad face in the photo). She was just about to come down - with Hannah behind her on the top of the ladder - when the whole thing almost collapsed. I say almost - because Diana had her leg out on the side and the handle (attached to the ladder) came down and trapped her leg. She had her own and Hannah's weight squashing her leg between the pole and the slide. It was so very frightening - for her, Hannah and myself. Thankfully we had eaten outside and so we were really close and could get to her very quickly. It was very upsetting to me though (perhaps pregnancy adding to that mix). We got ice on it really quickly and I was very thankful so see the movement she was able to get in her leg as the time passed. Once the children were in bed that night I had a good cry about it all. I so thank God that even though she got terribly hurt - it was not as bad as it could have been. Understandably the slide is no longer in use and I am not even interested in seeing if it can be fixed. The memories that are now attached to it are far too emotional for me. :(

At least the day could end on a high with a nice refreshing swim.
I never feel wonderfully motivated to get in - so get a couple of photos of the rest of the family. Hannah also moves between the small pool and this big one quite a bit - so it's good to keep an eye on her.

Hannah can just managed to stand in the shallowest side of the big pool - so spends most of the time "on Dad" when she is in here. Ruth is just loving the water and really putting a lot of effort into trying to get this swimming thing sorted. At least she has got quite a bit more space "to play" now that she is so much taller than last year. I remember her just managing to stand in the shallow end last year. 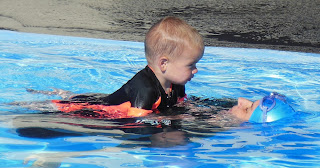 I did eventually get in again and had a lovely swim. I hate the chlorine on my hair - so was waiting to use Ruth's cap (our 2nd one got moldy last year). I have just had to accept that Ruth is happy with her hair in the water - so until we get another one will just try make sure she rinses her hair after each swim. Eventually Brendon was ready to get out but Hezekiah wanted to come to me. So I did two lengths with him. I think that worked out to about 10 lengths for effort though - it was a lot harder than I thought it would be. :-)
Posted by Buckland at 10:00 PM