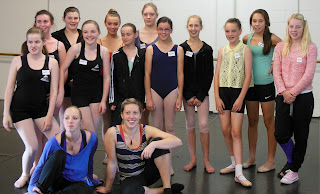 Rachel and I had an early lunch so that we could be at the Dance Workshop in town by 1:30 (and it was right in the middle of town - so a good hour and a half was needed). Rachel was so excited about this. It really has been a full on ballet weekend.
Lana (the instructor sitting to the left) was looking at her mother - waiting for her to get their camera sorted out - so I apologize for not getting another one with her ready for it. (At least I got a really nice one of her and Rachel later). 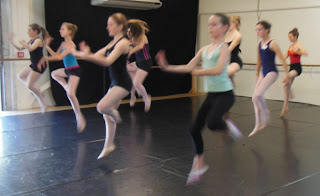 The first session was all about injury management and warm up and stretches. They got a really good work out with Kate and that alone would have created some stiffness for the next day. This was the only session I got any reading done - it was just too much fun watching them the rest of the time.
2nd session was Senior Pop Ballet. The video above and this photo are from that session. It was fun to see ballet to Pop music. Rachel was a little "in over her depth" today as it was actually a session for 12 and over. It was great for her to get the challenge of new things though and she did really well and learnt so much (not only about ballet but about facing challenges and dealing with the feelings that came with - for the first time in ballet - not being able to just "do" everything everyone else was doing).
This first video is part of one of the many routines that they learnt on the day. It was just amazing how much they did in one day. Rachel has never been in a situation where so much is taught so quickly as in her own lessons the girls often need many repeats before the "get it". So it was a real eye opener for her as to what it would be like if you were performing in a ballet and how much you have to learn in a very short space of time. 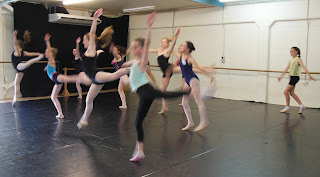 The 3rd session was Senior Contemporary with Kate. The above video is just a part of one of the routines they learnt which they did in groups at the presentation that evening.
Photo to the left was from the 4th session after a dinner break - Senior Neo Classical with Lana. It was really lovely for Rachel to dance with girls who have so much more experience than her. It really showed her what is possible (and encouraged her to do more stretching and work at getting kicks higher). She did a nice kick but as it was not as high as the others - but the time I took the photo her leg was already down. You can see that she was not the only one who felt like a "beginner" though. So she was not alone - it was just the adjustment for her from being the top of the class to being one of the juniors who is just managing to keep up. 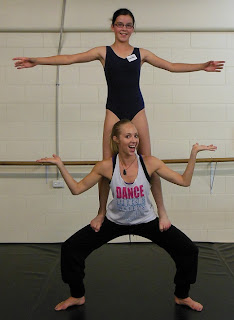 The video above is from another one of the ballet dance routines they learnt on the day. It was just amazing how much they took in - in such a short period of time.
The 5th session was Senior Contemporary and partnering with Kate. Rachel was pared up with Lana as there was an uneven number of students. Rachel had so much fun with her and Lana was just such a wonderful encouragement to Rachel throughout the whole day. Rachel will have very special memories from the day and really hopes to be able to attend again next year.
The video below is one that Rachel will probably hate for you to watch - but I took the video for a reminder to her of what she accomplished today. This routine was all about pirouettes. Rachel had NEVER done a pirouette before and so it was rather overwhelming for her. She got some tips from Lana on how to do them though and when it came to the presentation (which I filmed) she did such a great job in just giving it a try.
Well done Rachel. I am so proud of you.