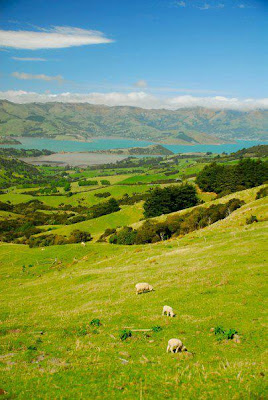 For the first time church camp was not in the same spot. The main reason perhaps because of having Conrad Mbewe come out and with that - more people at camp than normal. So we headed off to the YMCA in Wainui, Akaroa. I could not resist showing you Lynn Clevely's beautiful photo of the valley. Doesn't she just take postcard perfect photos. :-) I think she needs to start putting her signature on the bottom of her photos - don't you. :-) 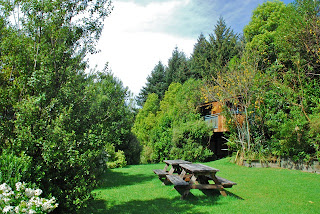 And another one taken from Lynn's blog of some of the campsite. Our rooms were part of that section you see. It was lovely accommodation and beautiful surroundings. 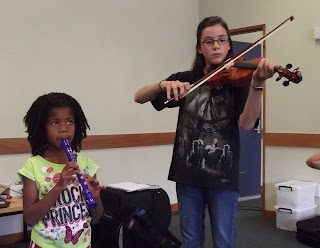 The afternoons at camp are kept open for "free time" and so the girls made a bee line for Aunty Lynn so that they could play their song for her. They have been practicing it for a couple of weeks now. I bought Brendon a cd (well - I bought the songs on iTunes - don't actually have a cd) called Hymn Styles: Cello Hymns and even though Cello and then violin are the main instruments - the girls changed that to violin and recorder. The specifically practiced "Come, Christians, Join to Sing" and have really done well. They don't have any music - Rachel just worked it out herself on the violin and then worked it out on the recorder and showed Ruth. I think they plan to practice a few more for next year. 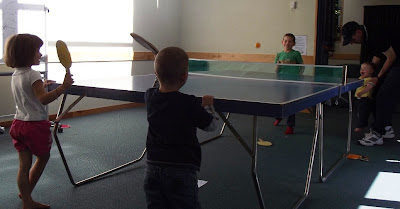 The table tennis was very popular and although this was not a great shot (my flash is not working) it was still a lovely one of the absolute joy on Hezekiah's face. You will have to double click on the photo to see his face clearly. Such excitement. 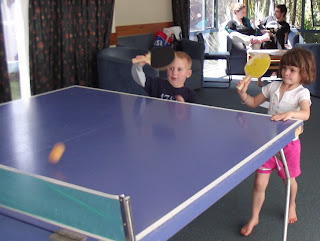 It was so nice that the younger children also go to try. Even if they missed the ball most of the time. 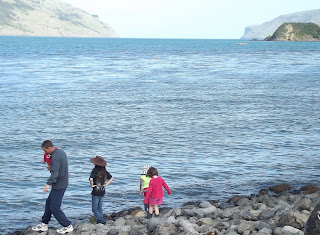 We thought we would take a walk down to the "beach". With all the stones we felt that was not quite the right word. It ended up being a bit chilly and after realizing quite soon how far it would be (especially for the little legs of Hannah) Brendon turned back and brought the car. So although the rest of us almost got to walk the whole way - it was great to not have to walk back - uphill.
The car also meant I could use it as a camera stand for the above self-timer family photo.
So how many of you think of the Knysna heads when you see this? :-) 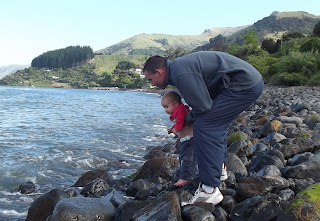 Another good reason we had the car with was because Hezekiah's pants got a bit wet. He just loves water and so was pleased Dad let him at least get his feet into it.
Posted by Buckland at 10:00 PM