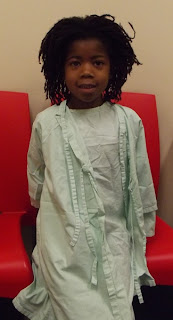 Ruth was booked in to have her umbilical hernia fixed again on Thursday morning. We had to leave at 6am - so it was a really early start for the two of us. Noortjie had said she would be able to come over at 7am when Brendon had to leave for work. She suggested that I call the hospital and at least ask them to put Ruth as early as possible as it is a far way for us to travel and I do have other children (including a baby) at home. Well - the request was heard and Ruth was scheduled to be the first. We had to be at the hospital by 7:30 although the first op would only be at 8:30. Ruth was a little surprised at having to put on these hospital clothes. At the other hospital for her first op - they just did it in her own clothes. It just came out because when someone asked her "was everything the way you expected" she said "no - I had to change". So it made an impression on her - although it did not worry her at all. 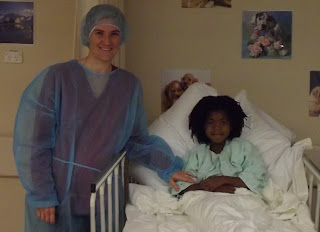 I even had to get dressed up "like a smurf" to accompany her until she was asleep. So that made it more fun. She was not the only one getting dressed up. We had a little wait in this room but thankfully there were so many pictures on the walls that Ruth's suggestion of "I spy" kept us busy and laughing. 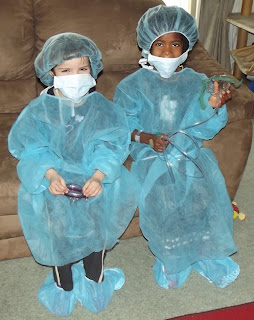 The nurse was very friendly and when I came out and she showed me where to throw all my blue clothes - I asked if I could keep them for the girls. She insisted I throw the "slippers" away - but she made sure I had at least two of everything. Hannah was very pleased.
Ruth took a little longer to get the "all clear" afterwards from the anesthetist. He stayed with her for a while longer as he was not happy with her breathing. She was struggling quite a bit and they had to keep her on oxygen and wait for her chest to settle and her breathing to get back to normal. Although she has not had any indication of any sickness - Hezekiah did cough yesterday - so perhaps the start of something was there and the anesthetic just upset it all a bit. It took her a bit longer than last time to feel well enough to leave recovery - and then we headed back to the ward. 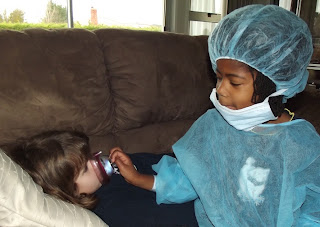 The policy in this hospital was that you stay in the ward for 2 hours though. Ruth was eager to get going though - as she wanted us to have enough time to get Chinese food on the way home. I had been hoping to get home before Noortjie had to leave at 1 - but when I realized they wanted Ruth to stay longer we let Joyce know that she would indeed be needed for an hour or two. So we did get the Chinese food on our way home. And Joyce had enjoyed the time she had spent with the children too. It was reported that Hezekiah was as happy as could be the whole time. I am very thankful it all went so well.

I really have had to adjust to leaving Hezekiah lately as I had to take Ruth into town to get her gum checked on Monday. It had been hurting her for a while and because it was a different colour to the rest Brendon was concerned about an abscess. I had phone the dental nurse and she suggested we rather get to see a dentist. So at very late notice Nikki said she could pop over and watch the others while I headed in. Nikki is the Play Centre lady and Hannah really likes her. So she had a lovely time and Hezekiah was a happy little boy for her too. Thankfully Ruth did not have an abscess. The dentist just suggested using a really soft toothbrush and being extra careful in that area for a while. I think the gum was just healing still from the baby tooth Ruth had to pull out - almost out the front. 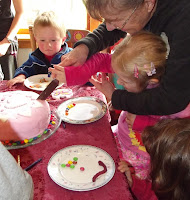 On Saturday we headed up to the Spencer's home for Katie's 5th birthday party (up because they are 30 minutes drive UP into the mountains). It's always amazing to think how quickly time flies when Katie has a birthday. I was already friends with Kerry via e-mail before we left South Africa and Katie was born just before we arrived. So it's always a vivid reminder of how long we have been living in New Zealand. It was hard for Ruth to not be able to run around with the other children - but it was still special that we got to spend the day with them.
Posted by Buckland at 10:00 PM