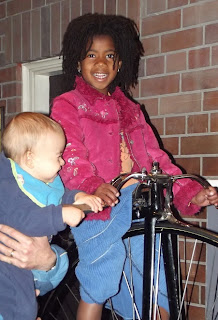 I had a meeting planned in town on Tuesday so Brendon took the day off so that we could just enjoy the day together. We had tried to plan it all out nicely so that Brendon could be with the children in the Discovery section of the museum while I was at my meeting - but only a small part of the museum was open so we ended up getting through it all in a very short time - before my meeting was even due to start. 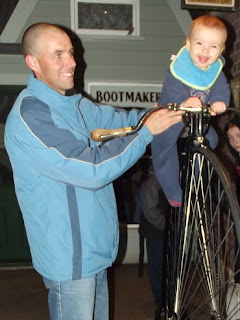 Thankfully the family could just come with to the meeting and it was not too long. It was still a nice day together and it really has gotten Hannah looking forward to going back when the "Discovery" section is opened. She looks forward to all the things she can touch. 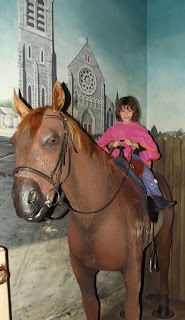 The penny farthing and the horse are always highlights with the children. 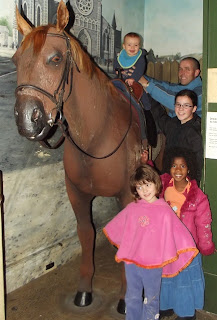 I only realized when I looked at the photos that they had a picture of the cathedral behind it.
Almost a family photo to the right (I am generally missing in these) - at least a nice record of how big all the children where at this visit.
The girls also enjoyed the old toy shop and the other shops with old things on display in this area. The old clothes were also lots of fun for them - Hannah especially liked the "marrying clothes" (wedding clothes). 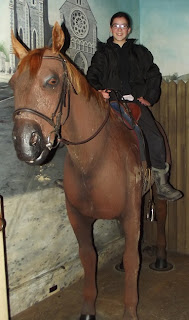 Rachel was pleased that she was able to mount the horse on her own. I think they leave the strip nice and long for the older children. It really is a big horse.
Hopefully we can get back to the museum again soon (as Hannah keeps asking). And to think - Hezekiah will be around the age that Hannah was when we had this visit to the museum with Grandpa and Nana. Gosh - she looks so little. 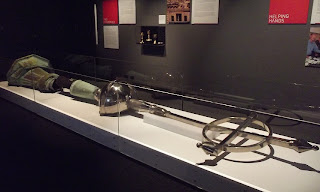 A new section of the museum is about the earthquakes. With lots of videos and photos it is a good record of all the events that took place not that long ago. This is a photo of the Cathedral's cross. I should have had the girls standing behind it so that you could see how big it is (it must be close to 10m long). 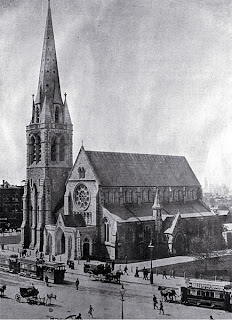 To the left is a photo of the Cathedral before the earthquakes of 2011. It's incredible to think how high this cross was. And for those of you who were wondering or who had perhaps not noticed. That top green looking section..... It was a replacement after the first spire was damaged in an earthquake in 1901.
To the right is a photo prior to the 1901 damage.The cross so high the photographer did not even manage to get it in. 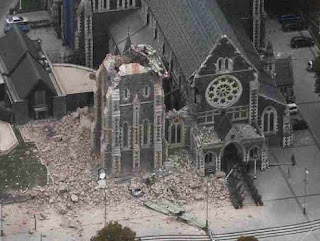 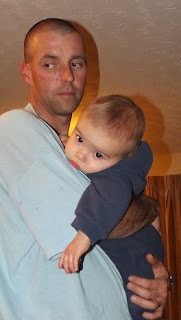 And on the sad note - look at this sad little face. It's not often Hezekiah slows down this much. And so not often you get a bit of a cuddle from him (a cuddle would only normally last around 2 seconds). He was off to bed after the photo was taken. One tired little sausage (and this was taken on Wednesday - so not the same day as our long day in town). 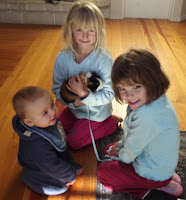 And now to end on a happy note. On Thursday the children and I visited the Fawcett family. The children had a wonderful time. They have 7 children and so many pets I would never even think to try and count them all (although I am sure they could tell me exactly how many there are). Hannah and Madeline hit it off really well and loved the fact that they happened to be wearing matching clothes. Rachel spent ages with Serita and the horses and Ruth had great fun with Zac. Hannah came in to report that Ruth was climbing ON TOP of the play house. It was obviously something that Zac was allowed to do and so I explained that it was ok - they were allowed to climb on it. Little Miss Police woman wanted to just make sure no rules were being broken. :-) 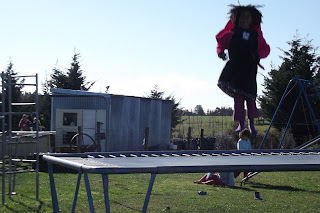 I had an appointment not far from their house and so for the first time left Hezekiah with someone other than Brendon. I only realized when I left that I had not left him with a "baby sitter" before. Although he spent almost the whole time in a cot having his afternoon nap. :-)
Here is a photo with all three children. Ruth enjoying the tramp, Hannah and Madeline were between the slide and the swings and Rachel is in the background with Serita checking out the different rabbits and Guinea pigs. What a fun time we had visiting. I must make sure I get us over to this side more often. As it's a good 40 or 45 minutes away - so it's not a trip I do often. It was so worth the drive out though and we all look forward to our next visit.
Posted by Buckland at 10:00 PM