Catch up the new normal

Time really has flown and so let me do another week in one go. This one taken on 9 July - Hezekiah loves playing in this little "hiding spot" with the younger girls. Just enough space between the two chairs to crawl through. Sometimes they put a blanket over the top and make a little tent too. Here he is sitting with a pair of toy keys - playing with the one peace that goes round and round. Happily sitting spinning it and making his little car noises. :-)

4 Square birthday time again and so that means colouring in competition time. For every picture submitted you get a little cool drink - so at least they all get something for their efforts. I was really impressed with HANNAH's creation this year (at only 4 years old). She worked so diligently and carefully. Good job Hannah. 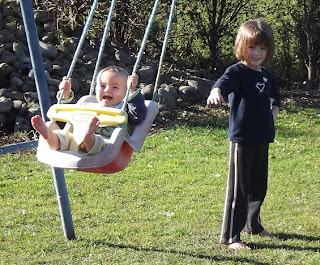 15 July: Hezekiah enjoying some sun in his swing.
Something we have not kept you all up to date with is Tiger's wanderings. He had been missing again for months but we got a phone call over a week ago to say that he was at our old place. Brendon quickly headed over and returned with a VERY friendly Tiger. 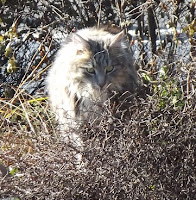 We were thrilled to see him again and even more pleased to see how friendly he still was. We kept him locked indoors (with the cat flap locked) for a number of days before we started letting him have supervised time outside. Eventually he was looking so relaxed that we started leaving the cat flap open at night. 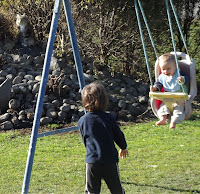 Unfortunately a few days after this photo was taken - a neighbourhood cat came INTO our house during the night and I think that frightened Tiger just too much and he made a dash for it again. Such a pity that he can find his way to the old house but even though he misses us after a while - can't find his way back again.
You can see Tiger on the left there - happily watching the girls outside. Whenever the girls were out he enjoyed walking around with them. He will again be very missed. 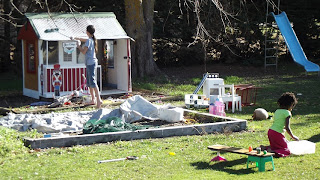 The girls got into a bit of a spring clean mood with the lovely sunny weather (and with Ruth's birthday part coming up). So they did such a good job of cleaning Rose Cottage. Rachel was such a great help to them. Especially as she can't really plan much with them in there (it really is getting a bit too small for her). 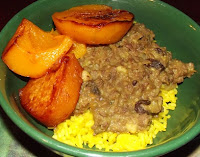 It was lovely to do a meat swap with someone and get some beef mince. A big batch of bobotie got made (with 4 meals going into the freezer). Thankfully Hezekiah loves bobotie as much as the girls. This was Hezekiah's bowl of food before it all got mashed together. The sweet potato and pumpkin (yes both are orange) worked well in softening it a bit for him. He does not really like the texture of the rice - so the veg helps hide that a bit. 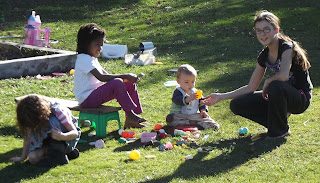 16 July: Enjoying some time in the sun and getting more cleaning done outside. Hannah got very upset about how "dirty" Hezekiah's pants were. I assured her it was fine. I agreed that we should have put darker pants on - but he had a wonderful time with them.