The local school's cross country race was scheduled for last Friday but due to bad weather was postponed to Thursday this week. This was great for us as it allowed us to organize for the older girls to take part. Ruth was invited to join the 5, 6 and 7 year olds for their practice on Monday.

She was in the group as they ran across the rugby field but by the time they had turned the first corner she had worked her way up to 6th position already. 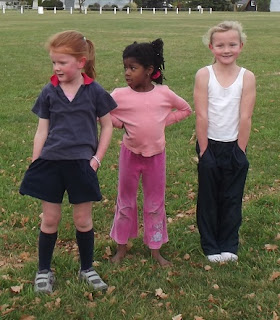 It was just lovely watching her run. At one point she was a little unsure of where to go but she was too far from me to be able to shout any help. Once the next runner came around the bend she worked it out and then quickly overtook her and came in 3rd. Well done Ruth.

Rachel decided she also needs to get some practice in - so she had her first run on the treadmill on Monday evening. 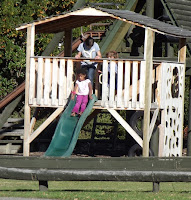 On Tuesday the Juniors had another practice and as we arrived a little early the girls got to play at the park a bit first.

I think Ruth wanted to do even better today but went out a bit too fast. She was in first position for a good way and came in 3rd again. The 1st and 2nd from yesterday did not run today - so it was good for Ruth to realize there are a few really fast girls that she is running with. 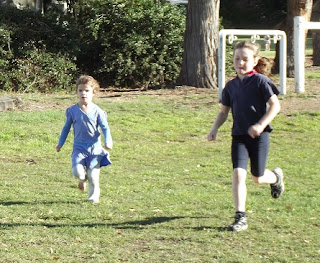 Hannah and Rachel ran as well on Tuesday. Hannah did really well but said "I ran out of energy". Even though she was asked if she wanted to join them on the actual race on Thursday she declined. I am sure she will join in next year though. 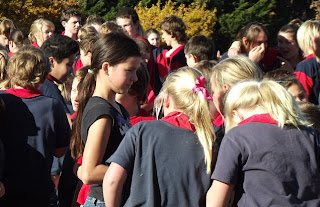 There was much excitement on Thursday. The older children had practiced the run on Wednesday (and the Juniors had run again too) but we decided to rather let the girls rest. I think next year they will try and practice for a few weeks before hand. Thankfully Rachel knows a lot of the girls - funny that this photo shows how many of the girls have light hair. ;-)

Ruth wore black today so that she would not stand out as much. We will try organize for the girls to borrow a school shirt for next year. The race was also different to the practices as today they let the boys start at the same time. Previously they let the girls have a bit of a head start - but today it was a huge group heading off. Ruth did really well and came in the 8th girl. I think she is really tired from the runs earlier in the week. It will be interesting to see how she does next year. Rachel and her have already started talking about running up to the post box - rather than riding - so that she can get fitter. 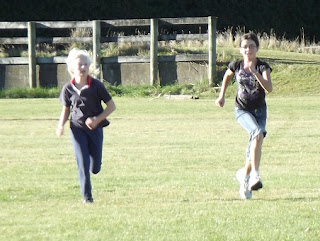 Rachel's course was just short of 5km - so although we did see them walking for most of the last 500m - they did give a good sprint to the end. I forgot to check the time when she came in and when I remembered it was 40min. So she must have done it between 35 and 38 minutes. I think that's brilliant for her first time. And the hill that they ran up and over was really high and tiring. So well done Rachel. Her two best friends are super fast (the younger one the fastest). So it will be interesting to see if Rachel can keep up with them next year.