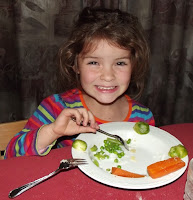 On Monday it was lovely having Hannah ask for more veggies after dinner. Trying to hard to smile for the camera though. :-) 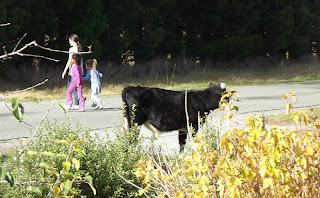 On Tuesday I was reminded that even though we live in the village now - we still live "in the country". I spooted this calf out on the curb and so the girls walked over the road to see if they could find out who the owner was. He eventually made his way home on his own though. 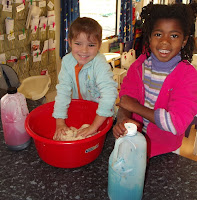 On Friday we headed off to play centre. There was no play dough and so the one mother said she would make some and asked my girls what colour they wanted. They decided on purple and even helped make it. 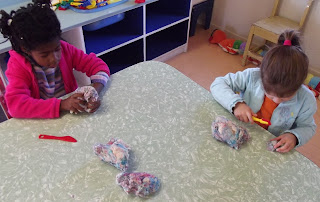 Instead of mixing the red and blue in completely she let the girls have fun seeing how the colour was created.

I love this painting that Ruth did last week at play centre. Anzac day was not too long ago and so a field full of poppies was a perfect choice. 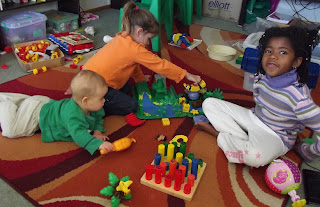 I had to return things to the Toy Library today and there were a few toys out that they want to sell as they have not been used in a long time. The girls were thrilled with what I came home with and it was even better that it now belongs to us.

And nothing like new toys on the floor to encourage Hezekiah to crawl nicely so that I can get a video. He has just taken off this week and is on the go. 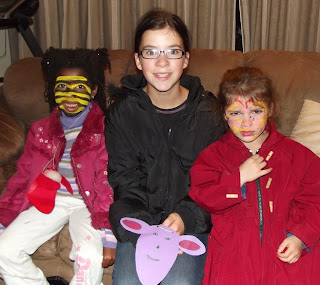 The girls then went out for a children's church activity with the theme of The Lord is my Shepherd. Hannah was a bit tired by the time she got home - so I don't know if she will go again.

On Saturday Brendon took Rachel to finally get her birthday riding boots (they had to order the size for her as she has such big feet). So they had their Dad and daughter morning tea at the same time and did some shopping for me while they were out. 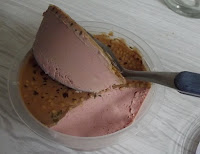 One of the items on the shopping list was chicken liver pate. I had noticed this week that Ruth's energy levels are really low again and I am sure it's due to the fact that we have not been eating as much beef since we got back from SA. Our beef supplier only has calves at the moment so we will have to look at other options till we can stock up the freezer again. Chicken liver is a great quick fix though - so she has been eating tablespoons of the stuff again (followed by a mandorin or something else rich in vit C). I am sure her low iron levels and energy levels did not help with all the running she did this week. It will be interesting to see how she does next year - just with better energy levels. 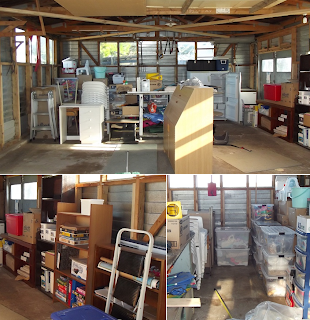 The weekend saw Brendon and I spending a number of hours cleaning in the garage. Now that the walls are done we could start cleaning properly. We cleaned loads of cobwebs and dirt off the walls and floor and had at least 3 buckets full of cobwebs and dust to take out. I really should have taken a before shot so you could see the transformation. It was great to have the walls clean so that we could start packing agains the walls and finally get some organization out there. It's great to have the extra bookshelves now for extra toys (untill we build on an extra play room) as well as all my food storage boxes with a lot of my bulk purchase stuff in them.
My job tomorrow will be sorting our my room so that my sewing cabinet can finally come inside. It's so heavy though - we will have to get some help in moving it in. 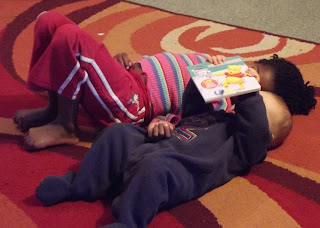 And a nice photo of Ruth and Hezekiah looking at a book together. Apparently they each had a side when Brendon first saw them and was hoping to get a photo of that. This one is still special though. After all our cleaning in the garage I got to unpack 3 more boxes which helped us uncover a number of extra board books for him. He does so enjoy books already and definately has his favourites. :-)
Posted by Buckland at 9:00 PM