Lynn and the boys 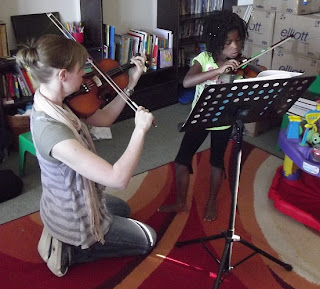 The girls were so excited when Lynn asked if she and the boys could come for a visit. They arrived just after lunch on Monday and it did not take Lynn long to get everyone's violins out. :-) 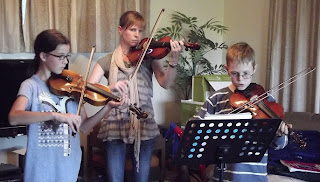 She very quickly got both Ruth and Rachel really motivated to play again. Rachel has not played more than 2 or 3 times since December. Lynn and Caleb where happy to learn some of the pieces that she knows though - so they could very quickly have some fun playing together. It did not take Rachel long to get back into it though and soon she was learning loads of their songs too.

What a beautiful sunrise on Tuesday morning. The Clevely's were sleeping in (as you do when you are on holiday) and so missed it. It really was a beauty. Rachel and the boys had gone to visit the horse on Monday afternoon and ended up bring Auto down to give the younger girls a ride. They were riding bare back though and as I was busy with Hezekiah at the time I was not there to supervise with Hannah and she "gracefully slid off". The poor girl got quite a fright though. Thankfully when Rachel brought Auto down again today (this time with a saddle) Hannah was more than happy to have another go. Even Lynn had a go today. 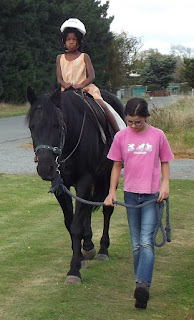 The accident today however was when Rachel had Hannah on and did not notice Ruth giving Auto a pat. She started leading him off and he stood on Ruth's foot. I watched him put all his weight on her tiny little foot as he s..l..o..w..l..y walked off. I got such a fright. I quickly got her inside with an ice pack ect. I am very glad she was standing on the grass and not the drive when it happened. No bones broken but another big fright for me. 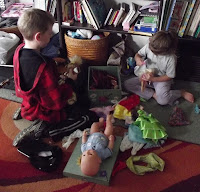 I had to laugh when I heard Hannah say "I don't know what to do" and his reply was "there are barbies". He did a great job in the "big brother" role and played with her for a while. 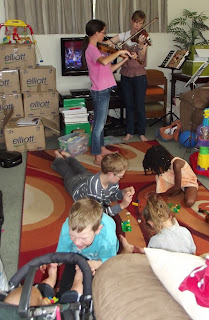 I think he was very glad when I brought the box of lego out. And although Caleb did play quite a bit of violin today as well - he got a lot of lego time in too. And yes - still a few boxes to be unpacked. We were excited about getting the extra pegs on the weekend only to find that on one section of the shelving there are about 10 holes that are just off position. So we will have to get that fixed before we can have it all finally done (and all the boxes unpacked). 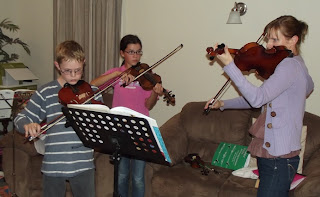 I suggested the children enjoy some of the sunshine outside and knew that it would not take long for them to create some game that would be enjoyable for them all.
Music again in the evening. At one point Ruth and I had joined them too.

What I love about this is that it's from one of Rachel's books but one she has never tried before. Lynn is really quick with picking up new ones - so all Rachel had to do was to watch Lynn's hand. It amazes me how Rachel plays. And I won't let her be discouraged about playing by ear. The music teach in our area told her the other day that she spent quite a while just looking at the finger numbering when she played. I think the main thing is to get her loving it again and playing regularly. 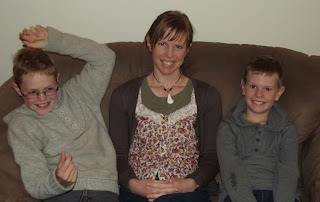 It was great having Lynn and the boys stay over. They left earlyish on Wednesday morning as they had people coming to stay with them from Wednesday evening. I am so glad they got to fit us into their holiday plans. I did not take a photo of the BOX FULL of books they brought up for us to lend. Rachel is already flying through them and is so thankful for that aspect of their visit too. 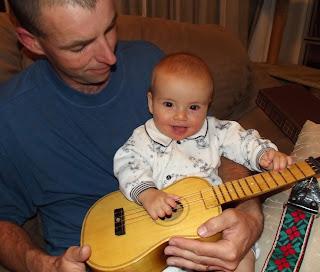 After Lynn's stimulation to get everyone playing violin again the hope is that I can start practicing with Rachel in the evenings. I got to spend a bit of time with her this evening which was great. And while we were busy Hezekiah enjoyed playing on Rachel's ukeleli.
Posted by Buckland at 9:00 PM