Our weekend away begins 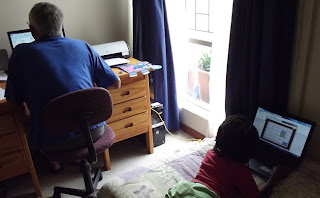 Grandpa and Ruth both on computers this morning. Thankfully they have an external modem so we can just plug our laptop in and the girls can use their on-line games while we are here (and I can work on my blog). 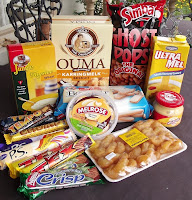 We walked to the shops this morning and got a few SA things for the girls to try over the next couple of weeks. 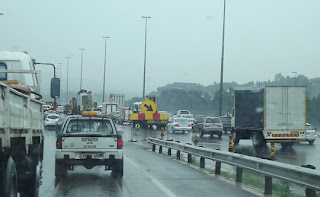 Just after lunch (once Hezekiah was up and fed) we headed down to my parents for the start of our weekend away with them. It was a bit of a rainy morning even though it's still hot. It was quite a surprise for the girls to see SO MANY cars. There were some roadworks on the highway which caused this back up as well as Friday afternoon traffic I suppose. 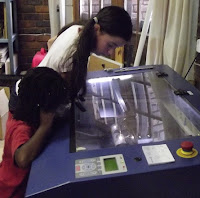 The plan was to leave my parents place by 2 and we did not do to bad as we were away by 2:15. We had borrowed Grandpa's trailer for the weekend and so there was a bit of extra packing that needed to be done once we got there. The girls enjoyed watching my parents new lazer in action and all the lovely things they have been making. It gave me some ideas of making a nice South African photo frame for a new Collins family photo. I will hopefully get something made before we leave and you can get to see what it does. It seems they can almost "print" on anything though and what we have seen is really lovely. 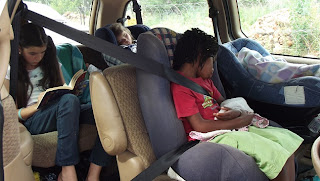 The place my mother had organized for our weekend away was not far - only about an hour away. The younger three had a nap on the way though - which was great. And Rachel read - no surprise there. :-) 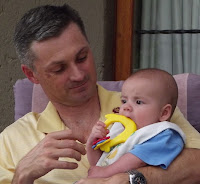 Craig enjoying some time with Hezekiah. Both my brothers really like babies. 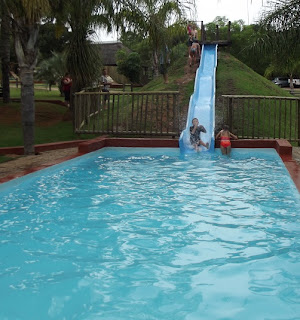 Once we were unpacked everyone headed over to the pools. It was great that we had two 8 sleeper units right next to each other and really close to the pools too. What a lovely water slide. It did not take Matthew long to have his first go. 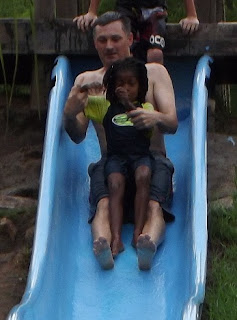 And not surprisingly Ruth was ready to have a go too. First she had a go with Uncle Craig. 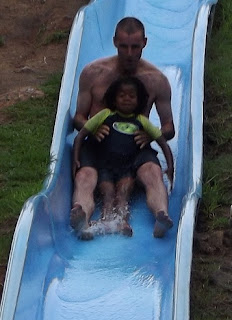 I think she ended up going down with Dad a lot more though as he was able to hold her up a bit higher when they hit the water. 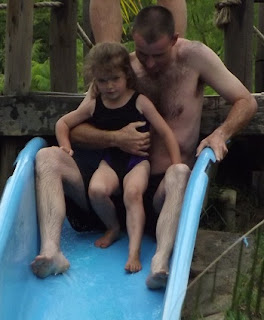 We were all very surprised though when Hannah said she wanted to go with Dad - right from the top. Looking back we should probably have let them go together from lower down and work their way up. 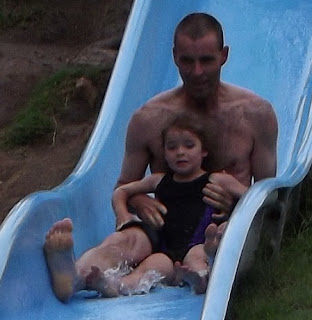 The slide is really fast and you can see how scared she was. Not once did she say she did not want to go (otherwise Brendon would have let her get off) but it was too much for her and she did not go again. We are still working on Rachel. She has promised Craig that she will go before the end of the weekend. 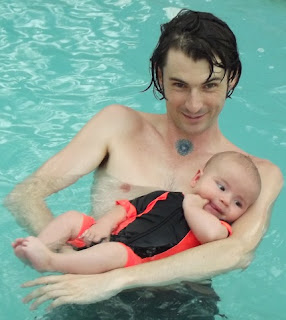 Eventually everyone was in the warm pool though. So warm it was like a bath. This was great for Hezekiah and he had a wonderful time. 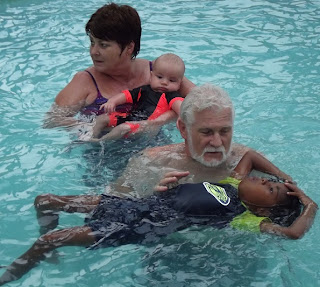 My Dad gave Ruth a few lessons on how to float.

We even got a lovely family photo (thanks to the self timer on my camera). Unfortunately Gillian and Paul decided not to join us this weekend - so it's not a complete family photo - but at least a wonderful reminder of the great time we have had together this weekend. Thanks for organizing this Mom.
Posted by Buckland at 9:00 PM