We were on the road by 2:15am and were thankful we had given the extra time. We arrived at the airport at 3:30 and it took till 4 to get checked in as there were some problems with Hezekiah not been booked on this flight. I had double checked his itinerary and knew he had everything booked exactly the same as us through Qantas - but there must have been a problem getting the info to Jetstar - the company they used for the first part of the journey.

The baggage wrapping place was only open at 4:30 but they allowed us to check in and printed our luggage stickers to be put on later.
There was only 1 bag to be wrapped before ours but it took till 5 to get all 4 of our bags done so we got them back to check in just in time (check in closed at 5). Then we headed upstairs to have something to eat (I had brought muffins and yogurt) and then headed to the gate. Thankfully again we headed over with enough time to spare as I did not realize we would have to fill out forms for each of us as well as wait in a line at customs. We got to the gate as soon a it opened and headed onto the plane. This was the flight that we were nervous about as there is no '"entertainment" but the girls did really well. The Lord was gracious and allowed us to have a couple of extra seats. This was a huge blessing when it came to feeding Hezekiah and just helped the girls to have a bit of space to move around.
When we got into the airport at Sydney the Lord again provided an extra blessing as we got a ride from the gate to the transfer desk. This saved us loads of energy as well as time and I was very thankful for this because although Hezekiah's ticket had been linked to ours - for some reason it had not been "issued" and so it took quite a while to get that sorted. Both in NZ and here is Oz the people have sorted the tickets for the return trip - so hopefully that is all done now.

We then had a little bit of time to spare and as everyone was hungry (there was no food on the 3 hour flight to Sydney) we got some food at the overpriced shops at the airport and then headed to the gate. We got there at the recommended time but they were running really late.
We only boarded 15 minutes later than planned and as there was a passenger who had gotten sick they had to get her luggage out the plane before we could leave. We left almost an hour later than planned but our pilate had told us that they had put extra petrol in so that we could fly faster and they anticipated our arrival time would be as planned - which it was.


The girls were so excited about watching TV. Unfortunately they had a few problems with some of the sets but they did all get to watch something and enjoyed that. The food on the flight was great (and more than enough). Eventually - with about 6 hours to go Hannah finally fell asleep. A couple of hours later Ruth fell asleep and then it was Rachel's turn. It was nice that they had all had a nap before we arrived. Brendon managed to get about an hours sleep and I had a 15 min power nap. 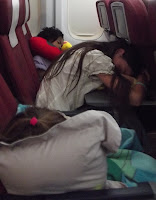 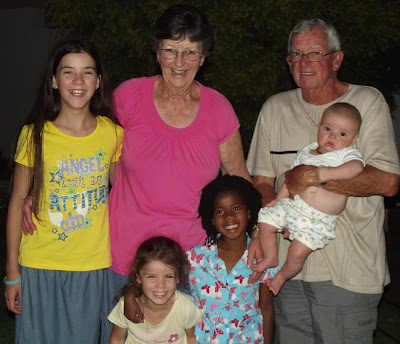 We got to Nana and Grandpa's house and had lovely tuna salad sandwiches to eat. I quickly unpacked the bags - I will have to sort the cupboards later. Then we all had a welcome bath or shower and headed to bed.
Posted by Buckland at 9:00 PM